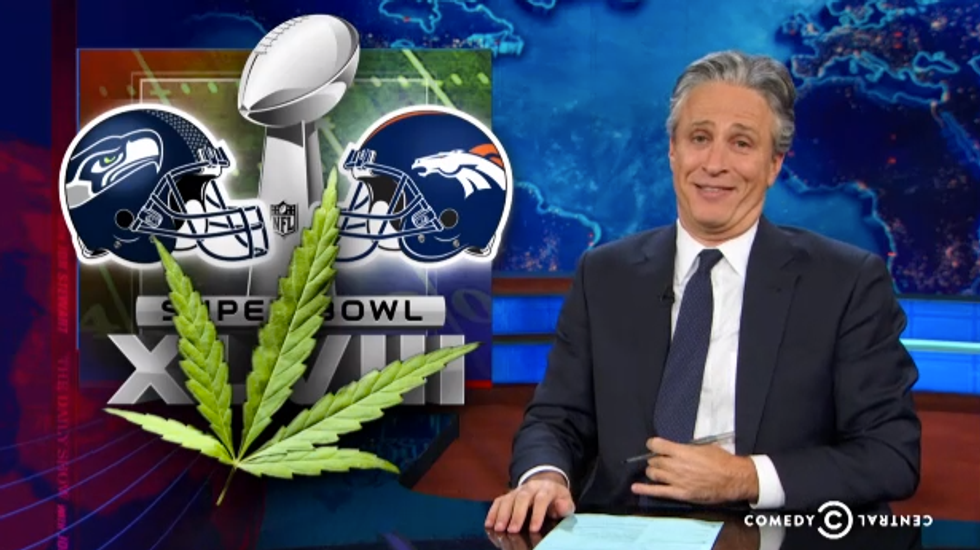 Every year, Jon Stewart pointed out on Monday’s Daily Show, it seems like America runs out of just what it needs to celebrate the year’s biggest sporting event.

“Unfortunately, past Super Bowls have been plagued by shortages of necessary super bowling materials,” Stewart said, rolling video of news reports on shortages of chicken wings and strippers.

“Of course, this year the matchup is between the Seattle Seahawks and the Denver Broncos, two teams hailing from states which have both legalized marijuana, which makes this year’s shortage all the more tragic,” he said.

“No Velveeta?” Stewart wailed. “What will I do without my milk-based sodium phosphate? I’ll have nothing to dip my calcium hydroxide into. I guess I’ll just have to dig into my strategic Velveeta reserve.”

But he said something about these reports was suspicious, because representatives from the cheese product’s manufacturer couldn’t pinpoint a specific reason why store shelves might be understocked with Velveeta during its peak demand period, during the NFL playoffs.

“I know what you’re saying, that this isn’t real,” Stewart said. “Are you implying that the makers of Velveeta would attempt to pass off as real some sort of blatantly artificial, clearly unnatural synthetic creation? You, sir, clearly don’t know Velveeta. So maybe our precious cheese-like substance is safe, but football fans shouldn’t get too comfortable. There’s a very real and even more devastating shortage on the horizon.”

He showed news reports about a “fast-spreading pig virus” that could cause bacon prices to skyrocket.

This ailment, the porcine epidemic diarrhea virus, has been reported in about 200 health facilities in 14 states, according to reports.

“I retract my request,” Stewart said. “Could you be a little less specific? Porcine diarrhea virus. We’ve all been there. Perhaps we should go back to what this is doing to our bacon stockpile.”

A bacon shortage may not be so bad, after all, Stewart said.

“Oh no, a bacon shortage,” he said. “That means Type 2 diabetes rates could fall dramatically, extending our lives and saving us billions in health care. Why god, why? Because if there’s one risk America is running, it’s not eating too little bacon.”