Noam Chomsky: The Tea Party is the 'petit bourgeois' face of corporate oligarchs 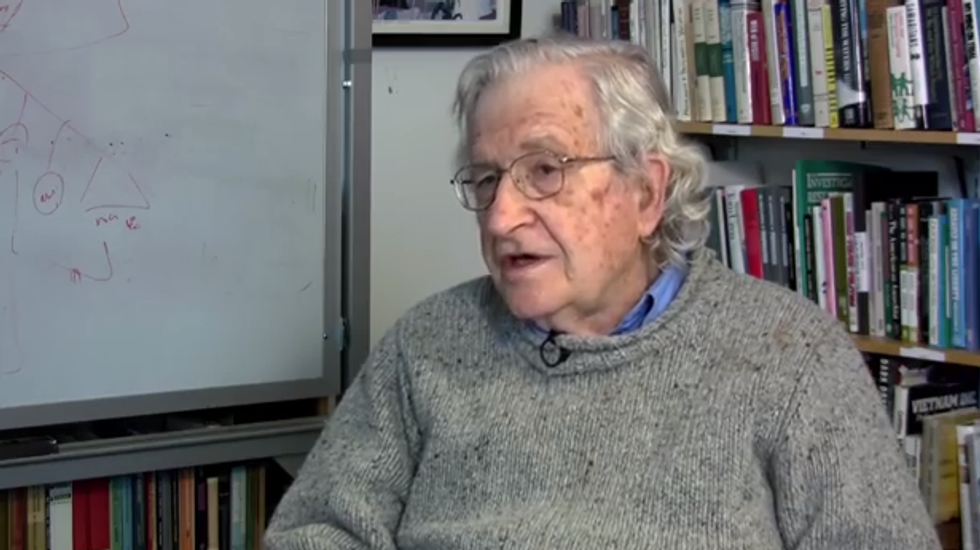 The Tea Party is just the popular face of corporate power in the United States, says political philosopher Noam Chomsky.

“I wouldn’t call them revolutionary,” Chomsky said, dismissing a suggestion that the conservative political faction had anarchist characteristics.

He told Radio VR during an interview posted online last week that he agreed with the conservative political analyst Norman Ornstein’s characterization of the Tea Party.

“He just described them as a radical insurgency opposed to rationality, to political compromise, to participation to a parliamentary system -- in fact, with no positive goals themselves,” Chomsky said.

He said traditional anarchists opposed the inherent inequality in the relationship between a government and its people or business owners and their workers, while Tea Party conservatives promote this imbalance.

Tea Party conservatives present themselves as strict constitutionalist proponents of a limited government, a claim that Chomsky rejected.

“They do oppose too much state power, but that’s a bit of a joke; they also support state power,” he said. “They support the powerful systems that sustain private power, concentration of power, as opposed to traditional anarchists.”

Chomsky agreed that the Tea Party was a genuine popular political movement who members were almost entirely white, “petit bourgeois” business owners who tend to be highly nationalistic and had racist elements.

The group’s power and significance comes not from its numbers, he said, but by the heavy funding it gets from corporate backers and the favorable coverage it receives from some media outlets.

The Tea Party’s popularity is essentially a symptom of the rigged political system, Chomsky argued.

“They have popular support and plenty of financial support, and a lot of their power comes from the radical gerrymandering, redesigning of electoral districts,” Chomsky said. “So for example, they’re powerful in the House of Representatives, where in fact, Republicans have the majority of the representatives but with a minority of the vote.”

He said that Democrats actually won significantly more of the popular vote in the last congressional election but were unable to gain a House majority.

“By virtue of rearranging of electoral districts and vast amounts of money, the right wing was able to take over the representation,” Chomsky said.

He cited a study by the political scientist Thomas Ferguson on campaign funding and its effect on electoral results.

“(He) showed there’s an almost linear relationship between the amount of money put into a campaign and electoral victory,” Chomsky said. “These are basically bought.”

Watch this video of the interview posted online by VOR America: