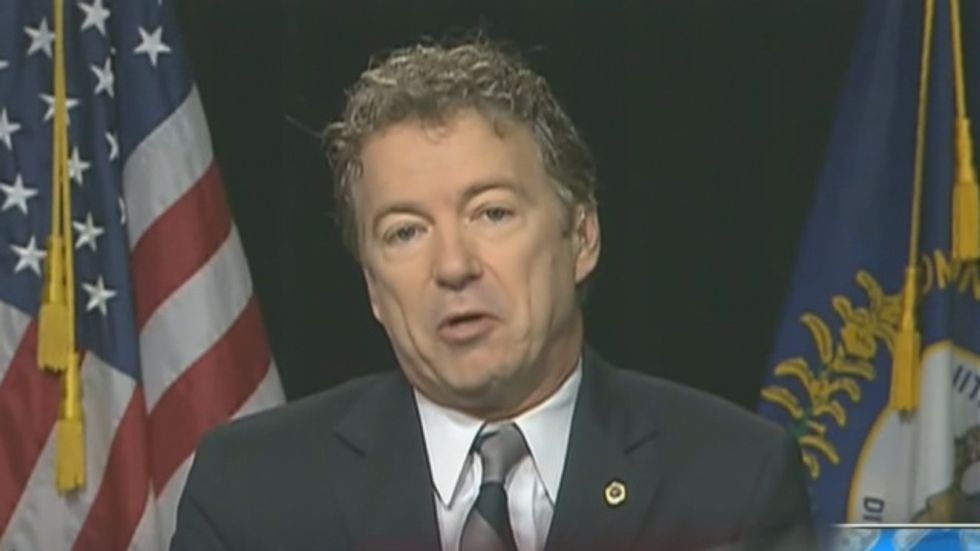 Sen. Rand Paul (R-KY) has launched a wide-ranging class action lawsuit against the Obama administration over its omnibus collection of phone data.

Speaking to Fox News' Sean Hannity on Friday, Paul said that, theoretically, every American with a cell phone is a potential litigant. The question, he said, is whether or not a single warrant can apply to millions of people.

"What better way to illustrate the point than having hundreds of thousands of Americans sign up for a class action suit," he said. "We want to overwhelm the government."

A link on Paul's campaign site will allow potential plaintiffs to join the suit, he said. The link, however, also contains a request for campaign donations. "Your most generous contribution will help me circulate this petition to as many Americans as possible to gain the absolute maximum number of signers," it says. The separation between the Paul campaign and the suit isn't clear. Calls and emails to the Paul campaign haven't yet been returned.

The American Civil Liberties Union and the New York Civil Liberties Union appealed the dismissal of its suit Thursday in federal court.ast week, U.S. District Judge William H. Pauley III dismissed the suit, ACLU v. Clapper, ruling that the NSA's program was constitutional and did not exceed the authority provided in the Patriot Act. That ruling conflicted with the December 16 decision in a similar lawsuit in Washington, Klayman v. Obama, in which U.S. District Judge Richard J. Leon found the NSA program to be likely unconstitutional.

"We believe that the NSA’s call-tracking program violates both statutory law and the Constitution, and we look forward to making our case in the appeals court," said ACLU Deputy Legal Director Jameel Jaffer, in a statement Thursday.