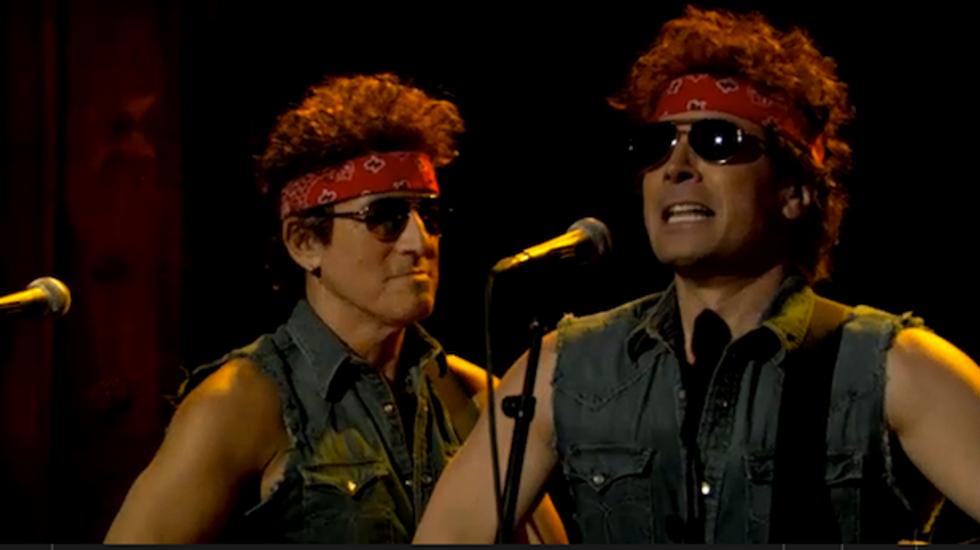 New Jersey's most famous son showed up on "Late Night With Jimmy Fallon" to poke fun at the ongoing "Bridgegate" scandal.

Christie's staffers are accused of shutting down lanes on the George Washington Bridge in political retribution against the city's mayor.

"Baby, this 'Bridgegate' was a big payback, it's a bitchslap to the state Democrats," Fallon sang.

Fallon sang first, wearing a wig, bandana, sunglasses and denim vest to look like Springsteen in the mid-1970s, and strumming an acoustic guitar.

"They shut down the tollbooths of glory because we didn't endorse Christie," he sang.

The crowd roared in approval as Fallon was joined after the first verse by Springsteen, who was dressed in an identical costume.

"Governor, let me in I wanna be your friend, there'll be no partisan divisions," sang Springsteen, who has campaigned for Democratic candidates. "Let me wrap my legs around your mighty rims and relieve your stressful condition."

The pair poked fun at Christie's news conference on the scandal last week, which saw the governor take questions for nearly two hours.

"The press conference went on and on, it was like one of my own damn shows," sang Springsteen, whose concerts are known for their epic length.

Denouncing Texas law, Uma Thurman reveals she had abortion as a teen

American actress Uma Thurman, in a newspaper column expressing opposition to a near-total ban on abortion in Texas, revealed Wednesday that she had an abortion as a teenager.

"It has been my darkest secret until now," the 51-year-old Hollywood star said in the op-ed published in The Washington Post.

One of U.S. Rep. Madison Cawthorn's Democratic challengers has just released an ad accusing the North Carolina Republican of appearing to have been "radicalized by extremists," and it's going viral, with more than 300,000 views in about ten hours.

"Like too many young people before him from around the world to right next door, Madison Cawthorn exhibits the signs of a young man who has been radicalized by extremists and is now dangerously radicalizing others," Jasmine Beach-Ferrara, one of four Democrats and seven Republicans running to unseat Congressman Cawthorn, says in her new ad accusing him of "stoking insurrection."

On CNN Wednesday, Trump biographer Michael D'Antonio discussed the campaign memo revealing that Trump's lawyers knew his voter fraud conspiracy theories were baseless — and argued that it might be time for courts to step in and block him from filing lawsuits at all, like his new one against his niece Mary Trump and The New York Times for revealing his tax practices.

"In many ways it's not surprising," said anchor Erica Hill. "What do you make of that, though? The knowledge was there with people who could have made it clear to those out there spewing these lies including the president, and yet here we are."