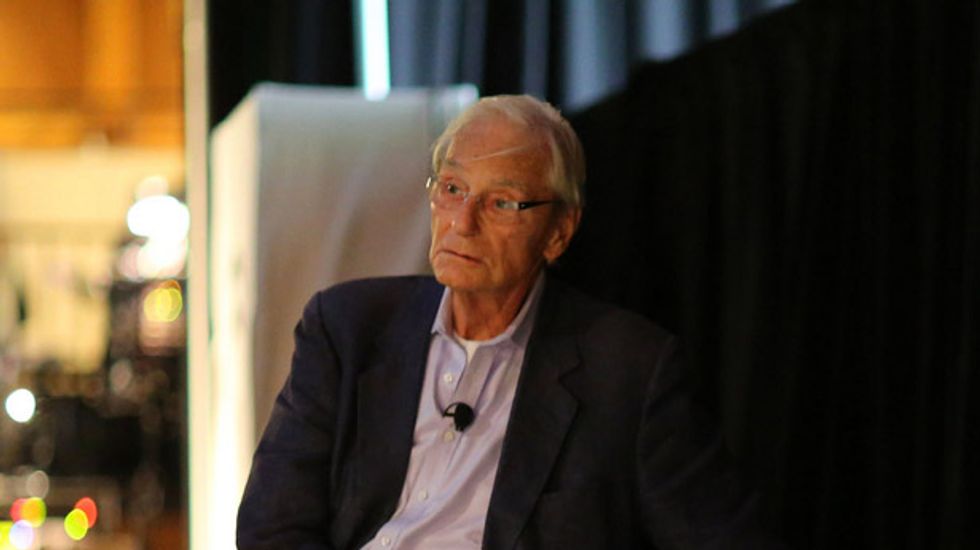 Billionaire tech mogul Tom Perkins, who recently came under fire for his letter in the Wall Street Journal  warning that the less wealthy might stage a Nazi Germany-style pogrom against the wealthy 1%, told a forum in San Francisco that the world could be saved by changing American voting laws: "If you pay $1 million in taxes, you get a million votes."

According to Mother Jones, Perkins recently sat down at San Francisco's Commonwealth Club for a Q&A session with Fortune magazine's Adam Lashinsky  entitled, "The War On The 1%." When asked to offer one idea that could save the world, Perkins discussed changing American voting laws "You don't get to vote unless you pay $1 in taxes... If you pay $1 million in taxes, you get a million votes."

Following the forum, Perkins stated that he was simply "trying to be outrageous."

During the wide ranging session, Perkins doubled down on his comparison of the imagined persecution of the wealthy to victims of the Holocaust, stating that he still believes that "the parallel holds".

He added that "if Germany had American gun laws, there would have never been a Hitler."

Among other subjects Perkins discussed were fellow billionaires the Koch brothers whom he described as victims of "persecution", that he couldn't get his start as a paper boy these days due to "child labor laws", and that Silicon Valley is a meritocracy, "Race has absolutely nothing to do with it."

Perkins also told the audience that the "extreme progressivity" of the US tax code "is persecution" of the rich.

"Government is a giant beast which has to be fed," he said, so it needs taxes to go "up, and up, and up." When moderator Lashinsky attempted to point out that taxes helped fund the creation of the internet, Perkins cut him off: "You're barking up the wrong tree."

Returning to the recent protests against Bay Area tech workers who have driven up rents in  San Francisco's housing market, Perkins described gentrification as "inevitable," called for cutting food stamps, and condemned Lyndon B. Johnson's War on Poverty for "unknowingly creating the destruction of lower-end families in America."

Midway through the forum, Perkin's who recently told an interviewer that his Richard Mille watch is worth a six-pack of Rolexes", was asked if he felt that he might have lost touch with the real world.

"Philosophically," he said, "nobody can prove that they are connected to reality."