Bitcoin ATM maker announces plans to expand to U.S. and beyond 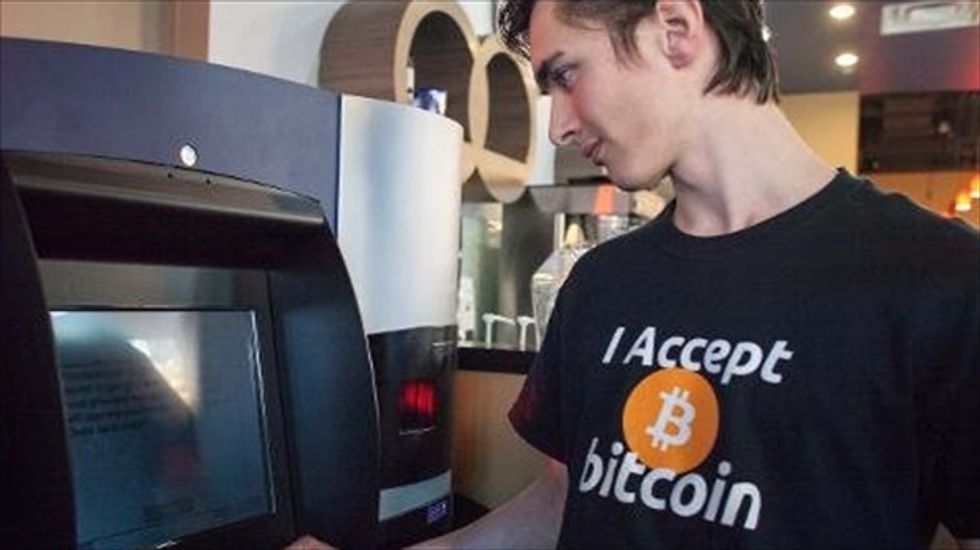 Even if you aren't sure what a Bitcoin is, you may soon find them at a nearby machine.

The first Bitcoin ATMs are cropping up in North America, enabling consumers to swap cash for units of the crypto-currency, or cash in their Bitcoins. ATMs are coming in Europe and Asia as well.

The machines could allow Bitcoins, generated by a complex computer algorithm designed in 2009, to move out of the realm of geeks to the broader public.

The US startup Robocoin, after unveiling its first ATM in Vancouver last year, announced plans to begin operating a machine in Austin, Texas, on Thursday. It also plans to open one in Seattle, in Washington state, ahead of a wider global launch.

"We have completely removed the barriers for people to buy and sell Bitcoins," Robocoin chief executive Jordan Kelley told AFP.

"You no longer have to wait days, you don't have to provide your bank account."

Kelley said Robocoin provides the only "bi-directional" Bitcoin ATMs, meaning that consumers can either buy or sell the digital currency.

Robocoin provides the hardware, made in the United States, to local operators, who must get certification from state and federal authorities and comply with anti-money laundering rules.

Operators around the world will also need certification in the countries where they operate, Kelley said.

"We were built to be fully compliant (with finance regulations) globally," he said.

Kelley declined to provide the number of orders for the ATMs, saying only, "We have a lot." He said the company is awaiting certification for its shipments to locations in Europe and Asia.

The Robocoin ATMs perform a biometric scan of each user's palm, as well as take a facial photo, which is matched to the user's government-issued identity card. The system also runs a check to determine if the user is a wanted criminal or terror suspect.

"We provide a profile of the customer that gives our operators full visibility and trackability," Kelley said.

The first operational ATM in the United States started up Tuesday in a New Mexico cigar shop, according to manufacturer Lamassu Bitcoin Ventures.

Lamassu has some 200 orders around the world, and has opened Bitcoin ATMs in two Australian cities as well as one each in Helsinki, Berlin, Bratislava and Vancouver.

The New Mexico operator Enchanted Bitcoins is "paving the way for mainstream Bitcoin accessibility in the United States," says Zach Harvey, CEO of Lamassu, a company registered in the British Virgin Islands.

The operator is following guidelines from FinCEN, the Financial Crimes Enforcement Network, to avoid running afoul of the law, and has registered as a money exchange service.

Despite the growing popularity of Bitcoins, the digital currency has been linked to crime and drugs in exchanges such as the dark Web bazaar Silk Road. And many economists warn that the currency has no hard value.

Bitcoins have been exceptionally volatile, rising to more than $1,200 last year, before falling to around $600 in recent weeks. And some Bitcoin exchanges have been shut down by regulators.

Last month, US authorities filed criminal charges against two operators of a Bitcoin exchange, including the head of a company with high-profile investment backers.

Some analysts see advantages in the move to Bitcoin -- it has little or no transaction costs, is quickly and easily transmitted and has verifiable and traceable transactions based on its software.

"The deeper I dive, the more impressed I am with this as a technology solution, as an incredible idea for finance, as a stored value for payments," said Staci Warden, executive director of the Center for Financial Markets at the Milken Institute.

Warden said Bitcoin has advantages over other currencies because it can be divided into extremely small units -- one quadrillionth of a Bitcoin -- for micropayments.

"Bitcoins can be sent to you with no transaction costs at all," Warden told an online forum Tuesday. She said that contrary to popular belief, Bitcoin transactions are not anonymous but "pseudonymous" and can be traced and verified on the Bitcoin master ledger.

"If Target (a US store) used Bitcoin, none of the 70 million customers would have had their accounts compromised, because Target wouldn't know anything about the customers," she said.

But a report last month by the International Institute of Finance (IIF), which represents more than 450 banks and financial institutions, said Bitcoin's future as a broadly accepted exchange medium is limited.

Mark Williams, a Boston University banking and risk management specialist, argues that Bitcoins are dangerous for the financial system, and that ATMs heighten the risks.

"An ATM makes it easier for the average person to get access to Bitcoins," Williams told AFP.

"But there is no consumer protection. There is no guarantee you will get your money back."

Williams argues that Bitcoin is not really a currency but a commodity, "and it's a high-risk commodity, a speculative commodity."

He said Bitcoin values have seen "flash crashes" of as much as 80 percent on an intraday basis and can be highly volatile, like other speculative assets.

"So I don't think they should even use the term ATM machine," he said. "It's really a betting machine."