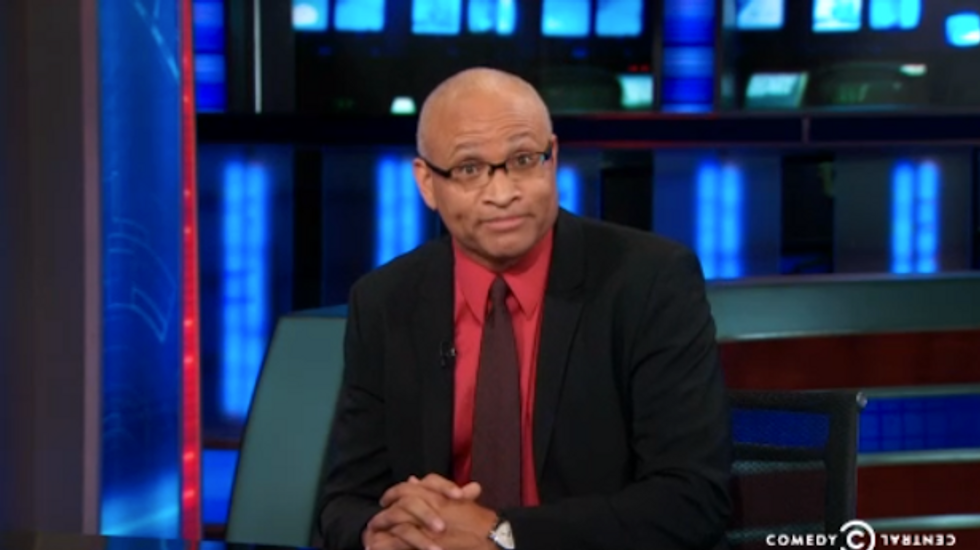 Fox News legal analyst Andrew Napolitano said during a Feb. 14 panel discussion that he held a “contrarian position” on Abraham Lincoln, and Stewart played a video clip of his claims.

Napolitano argued that the 16th president could have avoided the “murderous” Civil War if he’d allowed slavery to die a “natural death,” as it had elsewhere – which Wilmore bitterly disputed.

“The South was so committed to slavery that Lincoln didn’t die of natural causes,” he said. “If the free market was just about to end slavery then, then why is it still going on in some places 150 years later? Slave trade is the literal exact opposite of ‘free market.’”

Stewart pointed out that Napolitano’s viewpoint was shared by some libertarians and other Confederate apologists, and that an entire industry had sprung up around their particular school of thought.

“Do they teach history at this school?” Wilmore said. “Because their facts are all f*cked up. These people think Lincoln started the Civil War because the North was ready to kill to end slavery when the truth was, the South was ready to die to keep slavery. You’re welcome, libertarians, I just un-f*cked your facts.”

Wilmore said the underlying flaw in Napolitano’s economic argument was that it assumed human beings should be considered property, and he played clips of the Fox News analyst making arguments in favor of what he considered to be morally just wars – such as the American Revolution.

“So it was heroic to fight for the proposition that all men are created equal, but when there’s a war to enforce that proposition, that’s wack?” Wilmore said. “You know, there’s something not right when you feel the only black thing worth fighting for is tea. But I get it, I get it. That’s a good war, because that’s about taxes.”

He played another clip that showed Napolitano raging against taxation, which he called immoral, government-sanctioned theft.

“You think it’s immoral for the government to reach into your pocket, rip your money away from its warm home and claim it as its own property, money that used to enjoy unfettered freedom is now conscripted to do whatever its new owner tells it to,” Wilmore said. “Now, I know this is going to be a leap, but you know that sadness and rage you feel about your money? Well, that’s the way some of us feel about people.”

Slur-spewing man spat on Walmart workers and threatened to stab them with a knife: police

On Wednesday, the Connecticut Post reported that a man from Milford allegedly shouted racial slurs at Walmart employees — and threatened to kill one worker with a knife.

"Anthony Kane, 32, of Milford, was charged with second-degree threatening while carrying a dangerous weapon, second-degree intimidation based on bigotry or bias and two counts of breach of peace, police said," reported Christine Dempsey. "He also was arrested on a warrant for two counts of violation of probation."

The Netherlands declared an official water shortage on Wednesday as the low-lying "land of water" was hit by Europe's sweltering summer.

The Dutch government said it was eyeing further measures to conserve water amid a drought, and authorities have already imposed limits on farming and shipping.

On Wednesday, a key congressional ally of former President Donald Trump broke with him over the legitimacy of the Saudi-sponsored golf tournament he is hosting on his Trump National Bedminster property in New Jersey.

The argument came after Nick Adams, a pro-Trump social media influencer, took to Twitter to complain that the golfers participating in the tournament weren't getting top billing. "I really have no interest in the PGA Tour FedEx Cup Playoffs without the top LIV Tour golfers being included," he wrote. "Brooks Koepka, Dustin Johnson, Bryson DeChambeau, Patrick Reed, and Jason Kokrak should ALL be playing."