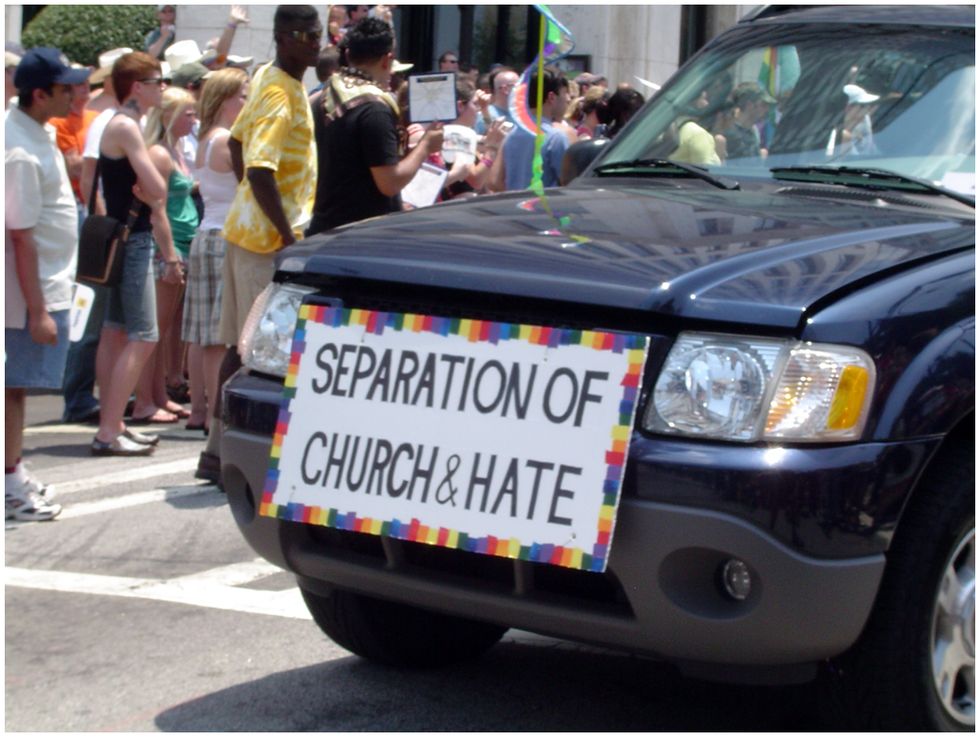 Georgia's version of the "Turn Away the Gays" laws that right-wing legislators are attempting to pass in multiple states would allow businesses to flout nondiscrimination laws.

According to Mother Jones, hotels and restaurants could refuse to serve LGBT people, potentially returning Georgia to its segregated, Jim Crow roots.

Legislators introduced the "Preservation of Religious Freedom Act" last week, and moved it to committee discussion on Monday. If enacted, the law would allow business owners in the state to deny services to LGBT people with impunity if the businesses allege that they are doing so on the basis of a "sincerely held religious belief."

Better Georgia director Bryan Long told Raw Story in an interview that he is appalled by the possible new law.

"Hate is bad policy and this is a terrible bill," Long said. "And we know that there are good people in every county in Georgia who will be opposed to this."

"Religion is not an excuse for hate or intolerance," he continued. "This bill doesn't protect Christians. It only 'protects' a small, vocal minority of the Republican base who choose to make hate their number one issue at the ballot box."

"Georgia's lawmakers have their liberty and their freedom backwards," he said. "I don't know of a single Christian or a member of any religious group who's been told that they can't go to their church. So I fail to see the discrimination against them and their religion."

The law would override nondiscrimination laws that are currently in place, such as Atlanta's municipal statute outlawing discrimination against LGBT people in housing, employment and public accommodations on the basis of their orientation or gender expression.

Georgia's law -- like Arizona's -- does not mention same-sex couples specifically, leaving open the possibility of discrimination against unwed mothers, divorced people or any other person a religious individual might object to. The Arizona state House and Senate both passed that state's anti-LGBT law and the bill is currently waiting to be ratified by Arizona Gov. Jan Brewer (R).

The law was sponsored in Georgia by a coalition of Republican state House members and two Democrats, who have since had their names removed from the bill. Rep. Mack Jackson (D) of District 28 was one of the bill's sponsors.

Progressive Georgia blogger Katherine Helms Cummings of RuralAndProgressive.org told Raw Story that she was "stunned" to see her state Representative's name on the bigoted legislation.

"I messaged him immediately," she said.

Shortly thereafter, "he took his name off of the bill," Helms Cummings reported. "I put something on Facebook about it and he replied there."

"My name came off yesterday," Jackson wrote. "I have apologized to any and everyone that was offended at seeing my name on the bill. Let's be clear, I did not sponsor this bill.

"I sent him a message saying, 'What's going on?'" Helms Cummings said.

Jackson responded, “My name was on the bill but was taken off in the clerk’s office after it was brought to my attention the effect of this bill. It is never my intention to discriminate against anyone. I did not sponsor the bill.”

Helms Cummings said that this should serve as a lesson to constituents, "If anything, I think it demonstrates the importance of being engaged with your legislators."

Mother Jones quoted a letter to the Georgia state legislature from Maggie Garrett, legislative director of Americans United for the Separation of Church and State, which read, "The government should not allow individuals or corporations to use religion as an excuse to discriminate [or] to deny other access to basic healthcare and safety precautions."