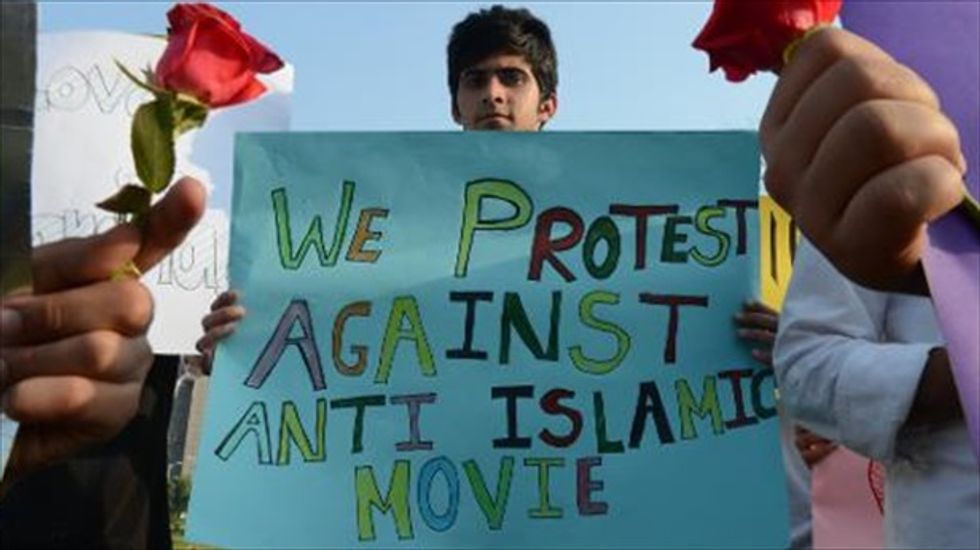 A Pakistani student holds a placard during a protest against the controversial film 'Innocence of Muslims' in Islamabad on Sept. 25, 2012 [AFP]

Google on Friday urged a U.S. appeals court to let it repost an anti-Islamic movie on YouTube, pending a re-hearing of the copyright case that got it removed.

The 2012 appearance of "Innocence of Muslims" on Google's video-sharing site provoked deadly violence, but the current legal case against it relates only to the concerns of one of its stars.

U.S. actress Cindy Lee Garcia brought a lawsuit claiming she was tricked into appearing in the film, without realizing its provocative anti-Muslim slant, and has received death threats as a result of it.

Google said it has complied with the "unprecedented sweeping injunction" but argued that irreparable harm is being done to Constitutional rights of YouTube, Google, and the public.

"Under the panel's rule, minor players in everything from Hollywood films to home videos can wrest control of those works from their creators, and service providers like YouTube will lack the ability to determine who has valid copyright," the California Internet titan argued in its request for an emergency stay of the order.

A lower court had refused to order Google to remove the film while Garcia's case goes forward, but on Wednesday the Ninth Circuit Court of Appeals overturned that decision.

The amateurish movie, which depicted the Prophet Mohammed as a thuggish deviant, triggered a wave of violent protests that left dozens dead in September 2012.

During the period of the protests, militants attacked the US consulate in Benghazi, Libya and US ambassador Chris Stevens and three more Americans were killed, although the extent to which popular local anger over the film played a role in the assault is a matter of fierce debate in the US.

Garcia was paid about $500 for three-and-a-half days of filming on the movie, which had the working title "Desert Warrior," after being cast by producer Mark Basseley Youssef, who had a variety of pseudonyms.

"Desert Warrior" never materialized, and Garcia only realized what had become of the footage when she saw "Innocence of Muslims" on YouTube.

She appears in the film for about five seconds.

Garcia asked eight times for the film be taken down, but Google refused to comply, so she applied for a restraining order seeking removal of the film from YouTube, claiming that it infringed her copyright in her own performance.

The U.S. Center for Democracy and Technology (CDT) condemned the court order as a threat to free expression and reasoned that giving actors independent copyrights for performances in films is "absurd."

"In addition to the flaws in the court's analysis of who could claim copyright interests in a film, the court also failed to give adequate weight to the free expression interests at stake," CDT senior policy analyst Andrew McDiarmid said in a blog post.