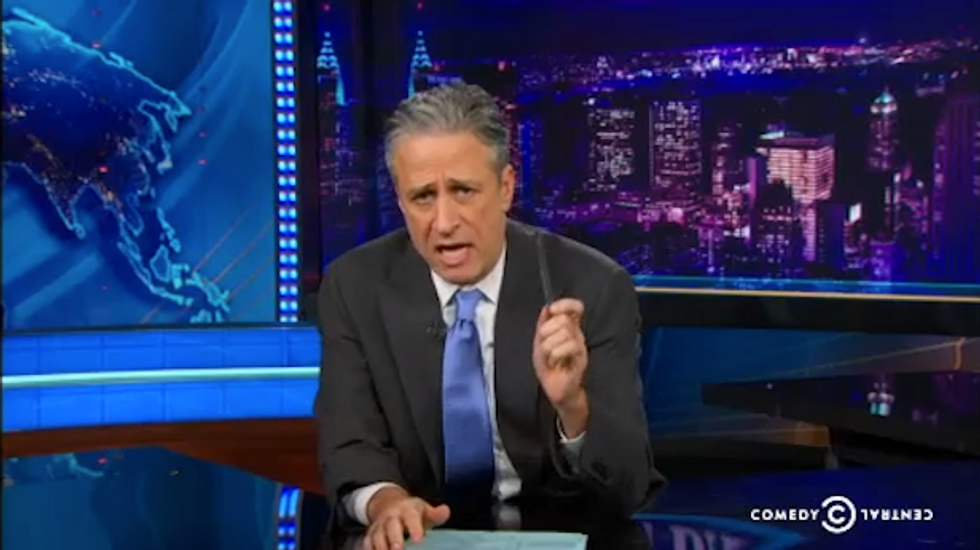 He mocked the reasoning behind the measure, which was vetoed by Gov. Jan Brewer several hours after the episode was taped, as illogical and immoral.

“I had not realized the extent to which the good pious peoples had been subjected to the tyranny of Arizona’s, of course, still-illegal gay wedding industry,” Stewart said.

He showed video of comments by state Sen. Al Melvin, a Republican who supported the bill as a pre-emptive measure.

“Here in Arizona, we’re all about protecting ourselves from possible futures,” Stewart said. “That’s why I also co-sponsored the Robot Voter ID Bill of 2042. Keep your titanium pincers off my great-grandkid, you dirty robot!”

Stewart called the bill a “slam-dunk veto,” noting that many of its supporters were backing away from it.

“Of course they’re having second thoughts, because the bill they passed was morally repugnant, as I assume everyone now realizes,” he said.

He showed several clips from news shows reporting on doubts and concerns about the measure, which has also caused the NFL to consider moving next year’s Super Bowl out of the state.

“This is where you are now, Arizona: You’ve made yourself too homophobic and dickish for professional football, according to the NFL, our new watchdog of gay rights,” Stewart said.

But none of those concerns addressed the real issue with the bill, he said.

“None of the reasons that you guys have cited – the fact that maybe Muslims could use it against us or, ‘Oh my god, people might not want to do business with us’ – have nothing to do with morality,” Stewart said. “But with so many good reasons not to pass the bill, it makes you wonder how it got this far in the first place. Megyn Kelly has a theory.”

The Fox News host speculated that the bill may have been an overreaction by the religious right to their perception that religion is under attack.

Stewart said that was a good point, and wondered where they might have gotten that idea before showing dozens of sound bites from Fox News that warned religious belief, Christmas, Easter, and Christians themselves were under attack in the U.S.

“Why would religious people overreact to that constant barrage of apocalyptic paranoia and outrage?” Stewart said, stroking his chin. “God only knows.”