Noam Chomsky: 'How to ruin an economy' in three simple steps 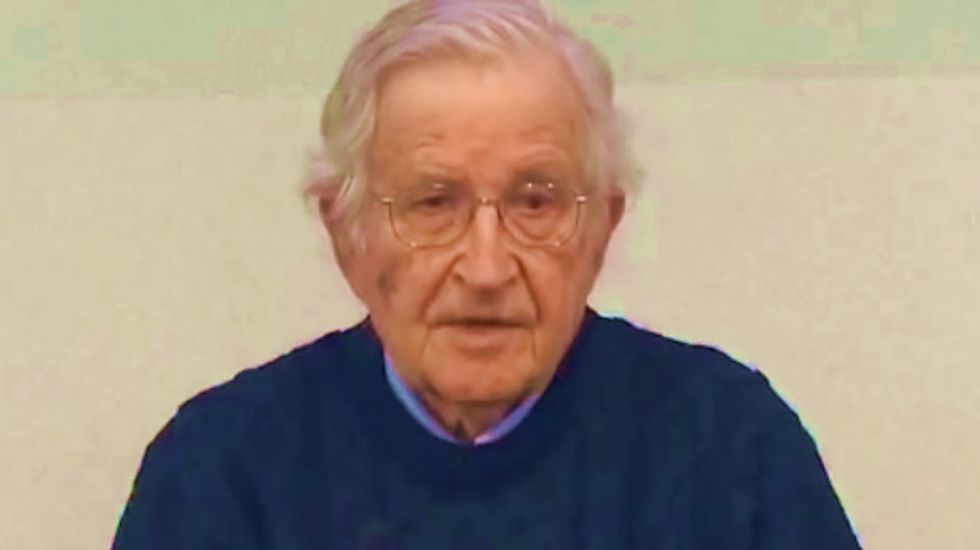 In a February 14, 2014 lecture captured by progressive videographer Leigha Cohen, Noam Chomsky gave some "simple" advice about "how to ruin an economy and a society."

"Let's suppose," Chomsky began, "that for some perverse reason we're interested in ruining an economy and a society...and to make it interesting, let's select the richest and most powerful society in history, one with incomparable advantages, one that's fortunately close at hand -- namely, our own."

"There are ample resources," he continued, to provide employment to all who seek it, "but they're hidden away where they cannot be accessed, in the overflowing pockets of the super-rich and the corporate sector, particularly the big banks, which have been generously rewarded for having created a crisis serious enough to have almost brought down the domestic and even global economy."

"The system is so dysfunctional, that it cannot put eager hands to needed work, using the resources that would be readily available if the economy were designed to serve human needs, rather than wealth beyond the dreams of avarice for a privileged few."

"These things didn't just happen like a tornado, they're the results of quite deliberate policies over roughly the past generation, the period of the neoliberal assault on the population," Chomsky said. "These developments should not be confused with idealized workings of capitalism and free markets, [apologies for which] are designed to protect the Masters from market discipline."

Chomksy's first suggestion as to how to ruin an economy would be to "cut back" on the "dynamic state-sponsored research and development" that brought about advances in information technology and medicine.

A second way "to undermine a healthy economy is to encourage the growth of financial institutions, giving them free rein via deregulation and using state power to under-price risk."

The third way would be to convince the public that behaviors encouraged by these institutions are "rational," and have no impact upon the future. Chomsky discussed the "euphoria" that surrounds the "century of energy independence," in which the United States becomes the new Saudi Arabia. Corporations are engaged in a major "propaganda campaign" to convince the people that "climate change, if it exists at all, does not result from human activity."

In the case of global climate collapse, however, "it goes well beyond just ruining an economy."

Watch the complete talk, via Leigha Cohen, below.