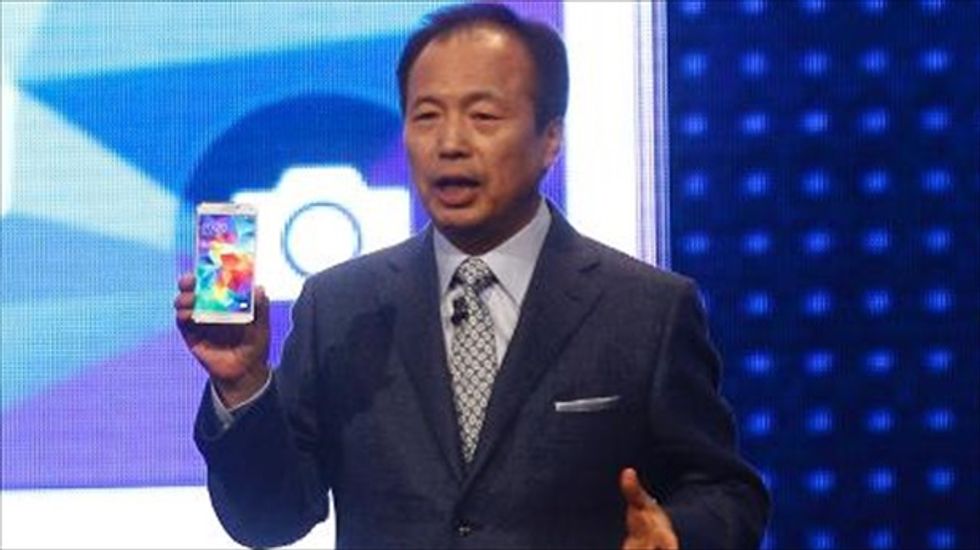 Head of IT and Mobile and Communication Division at Samsung JK Shin presents a Galaxy S5 at the Mobile World Congress in Barcelona, on Feb. 24, 2014 [AFP]

Samsung unveiled Monday its new flagship Galaxy S5 smartphone armed with a fingerprint scanner and a built-in heart rate sensor to defend its place as the world's industry leader.

Samsung made about 30 percent of all smartphones sold in the world last year, nearly twice the share of archrival Apple, which traditionally skips the annual World Mobile Congress.

But Samsung, which announced its new devices on the sidelines of the February 24-27 event, is nevertheless scrambling for new revenue sources as competition in mature markets intensifies.

In a struggle to stand out from the competition, including a rising challenge from China, Samsung showed off the Galaxy S5 with a light sensor on the back that gives a heart rate reading when the user touches it with his or her fingertip.

Though the case is plastic, as with earlier versions of the Galaxy series of smartphones, it is water and dust-proof, and has a leathery feel on the back.

The smartphone boasts a full high definition 5.1-inch screen, a 16-megapixel camera and, catching up with Apple, the home button doubles up as a fingerprint reader to unlock the device or to secure documents.

The phone has an extreme battery-saving mode that turns the display black-and-white and retains just six key applications.

To improve connections, it can combine a wifi signal and a mobile signal.

"With the Galaxy S5, Samsung is going back to basics to focus on delivering the capabilities that matter most to our consumers," said Samsung mobile division chief J.K. Shin, who presented the device in an event that featured a musical prelude by a live orchestra.

But the growth was powered almost entirely by developing markets, disguising a slowdown in mature markets such as Western Europe and the United States, which are the most profitable.

As a result, mobile manufacturers are showing off a string of novel smart devices to try to unlock new revenue streams.

The Samsung Fit bracelet follows that trend, with a curved touch-screen display and a heart-rate sensor to help give users feedback during exercise routines.

The previous day, Samsung unveiled an updated smartwatch, the Gear 2, which also has sports tracking software and a heart-rate monitor, plus a camera.

Samsung was one of the first major smartphone makers to produce a smartwatch when it launched the Gear last September, but that version won only a lukewarm reception from critics who said it was unfashionable and clumsy.

Hours after Samsung launched the Gear 2, rising Chinese smartphone maker Huawei revealed a connected watch of its own.

Huawei, already a major force in building mobile networks and the world number three smartphone maker in 2013, showed off its TalkBand, to be sold for 99 euros ($136).

South Korean manufacturer LG said on the same day that it would launch its first smartwatch in 2014.

Sony revealed its Xperia Z2 smartphone Monday, the first new edition of its flagship device since it announced this month the sale of its stagnant PC business to focus instead on smartphones and tablets.

The waterproof phone, available from March, has a full high definition 5.2-inch screen and a 20.7 megapixel camera that can take ultra-high resolution 4K video, along with noise-cancelling audio.

The struggling Japanese group also entered the fray for wearable devices, releasing the SmartBand SWR10, a bracelet that comes with an application allowing users to log events and photographs taken during the day as well as tracking how far they walk and checking their sleep cycle.