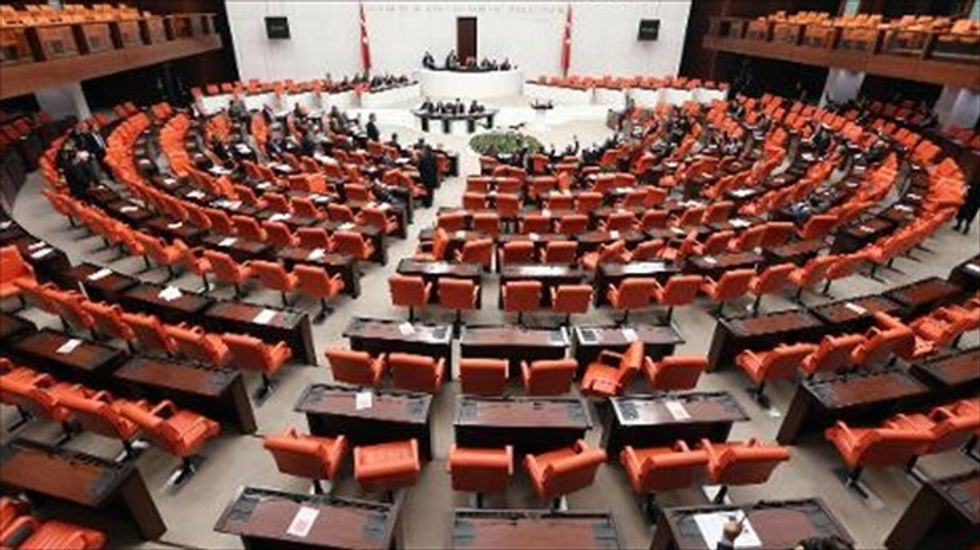 The proposals come amid parallel moves by Erdogan to push through contentious judicial reforms as he fights to keep the lid on a deeply damaging corruption probe entangling some of his closest allies.

After hours of debate, during which opposition MPs blasted the bill as "censorship", the measures were adopted in the chamber, where Erdogan's ruling Justice and Development Party (AKP) dominates with 319 of the 550 seats.

The bill extends what are already hefty Internet curbs in place under a controversial 2007 law that earned Turkey equal ranking with China as the world's biggest web censor according to a Google transparency report published in December.

The text notably permits a government agency, the Telecommunications Communications Presidency (TIB), to block access to websites without court authorisation if they are deemed to violate privacy or with content seen as "insulting".

Yaman Akdeniz, law professor at Bilgi private university in Istanbul, said the powers given to the TIB were "Orwellian".

This body will also be able to request users' communications and traffic information from hosting providers -- obliged to retain up to two years' worth of data -- without a court order, Akdeniz told AFP.

The measures, Akdeniz said, will "move Turkey away from the European Union in terms of Internet policy, perhaps a few steps closer to China", where the web is heavily censored by the communist authorities.

At the start of the debate, opposition lawmaker Hasan Oren had harsher words, comparing Erdogan to Hitler.

"When you came to power you talked of enhancing democracy in Turkey, Now you are trying to implement fascism," Oren said. "Remember that Adolf Hitler used the same methods when he rose to power."

The amendments, which form part of a so-called omnibus bill containing a mishmash of other measures, add to an already draconian approach under the 2007 law.

Under that existing legislation, websites including blogging tool Wordpress and video-sharing services DailyMotion and Vimeo have been blocked temporarily by court orders, while YouTube was off limits for two years until 2010.

Some alternative news websites cannot be accessed and people have been fined, jailed or given suspended sentences -- like world-renowned pianist Fazil Say in 2013 -- for tweets insulting religious values.

The Organisation for Security and Cooperation in Europe (OSCE) said the new powers for the TIB mean it will be able to "gather communications data about all Internet users without any legal limits or restrictions," with users "never... able to know when and how this information is gathered".

Dutch MEP Marietje Schaake said that in Turkey's EU accession talks, Brussels needed to tell Ankara such legislation is "unacceptable" and that "the rule of law and fundamental freedoms are at the centre of EU policy".

Reporters Without Borders said the aim is "to reinforce cyber-censorship, government control of the Internet and surveillance".

The Committee to Protect Journalists (CPJ) called it a "slide into Internet authoritarianism" in a country that is the "the leading jailer of journalists worldwide".

Even Turkey's Industry and Business Association was critical, saying the proposals "conflict with the principles of checks and balances" and would increase censorship and deter investors.

The Islamic-rooted government rejects the criticism, with Deputy Prime Minister Bulent Arinc saying there is "no such thing as Internet censorship. We are freer compared to many other countries and have freedom of press."

Erdogan, Turkey's all-powerful leader since 2003, is openly suspicious of the Internet, branding Twitter a "menace" for helping organise mass nationwide protests in June in which six people died and thousands injured.

For critics, last week gave a taste of things to come when Umut Oran, deputy leader of the opposition Republican People's Party (CHP), was told by the TIB to remove a parliamentary question from his website.

The question, which media were also told to not report on, was close to the bone for Erdogan, asking about purported recordings of phone calls involving the prime minister, his son and a minister.