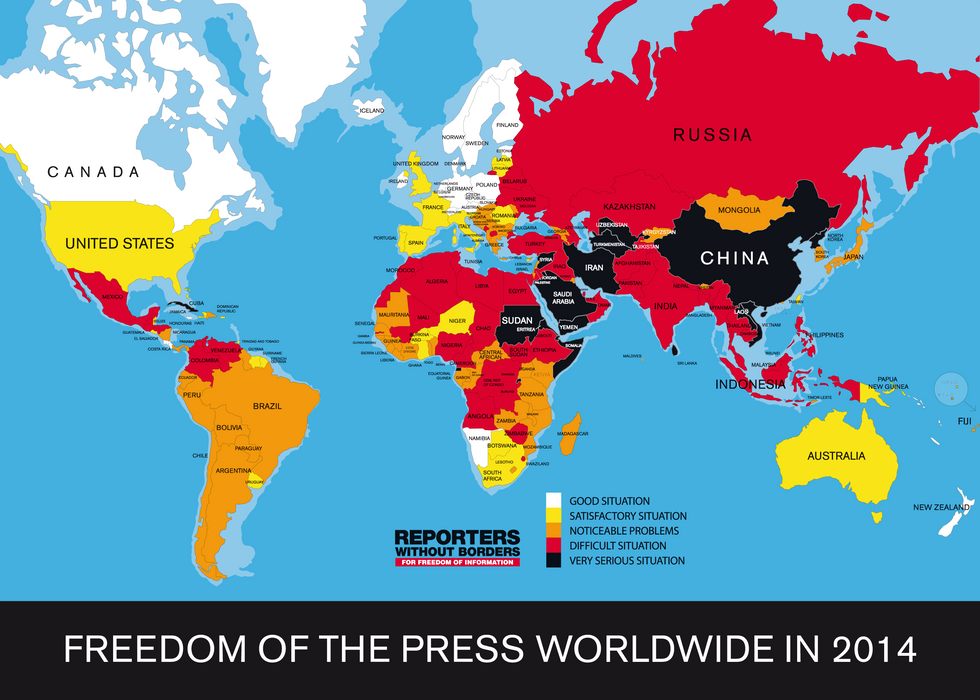 In one of the largest drops in the modern era, the United States has plunged thirteen places in the World Press Freedom Index, placing it behind former Soviet states and other countries not typically known for press freedoms.

The massive drop is attributable mostly to the Obama Administration's effort to crack down on whistleblowers. Obama's Justice Department has filed suit against more whistleblowers than any other presidential administration in history.

Forty-sixth places it behind the former Soviet republics of Lithuania and Latvia and the satellite states of Romania, Poland and Czechoslovakia (both the Czech Republic and Slovakia). It also puts it behind Ghana, South Africa and El Salvador.

"Countries that pride themselves on being democracies and respecting the rule of law have not set an example, far from it," wrote Reporters Without Borders Tuesday. "Freedom of information is too often sacrificed to an overly broad and abusive interpretation of national security needs, marking a disturbing retreat from democratic practices. Investigative journalism often suffers as a result."

"This has been the case in the United States (46th), which fell 13 places, one of the most significant declines, amid increased efforts to track down whistleblowers and the sources of leaks. The trial and conviction of Private Bradley Manning and the pursuit of NSA analyst Edward Snowden were warnings to all those thinking of assisting in the disclosure of sensitive information that would clearly be in the public interest," they added.

The U.S. hasn't fared well in the rankings in the past -- last year, the group put the U.S. at  32nd. Traditionally, this put it behind myriad European countries (Finland, Norway, Germany and Switzerland). Canada placed 18th. There are 180 countries on the list.

Of the United States and Britain, Reporters Without Borders writes:

US journalists were stunned by the Department of Justice’s seizure of Associated Press phone records without warning in order to identify the source of a CIA leak. It served as a reminder of the urgent need for a “shield law” to protect the confidentiality of journalists’ sources at the federal level. The revival of the legislative process is little consolation for James Risen of The New York Times, who is subject to a court order to testify against a former CIA employee accused of leaking classified information. And less still for Barrett Brown, a young freelance journalist facing 105 years in prison in connection with the posting of information that hackers obtained from Statfor, a private intelligence company with close ties to the federal government.

The United Kingdom (33rd, -3) distinguished itself in the war on terror by the disgraceful pressure it put on The Guardian newspaper and by its detention of David Miranda, journalist Glenn Greenwald’s partner and assistant, for nine hours. Both the US and UK authorities seem obsessed with hunting down whistleblowers instead of adopting legislation to rein in abusive surveillance practices that negate privacy, a democratic value cherished in both countries.

Across the world, the highest press freedoms are in Europe, the report says.