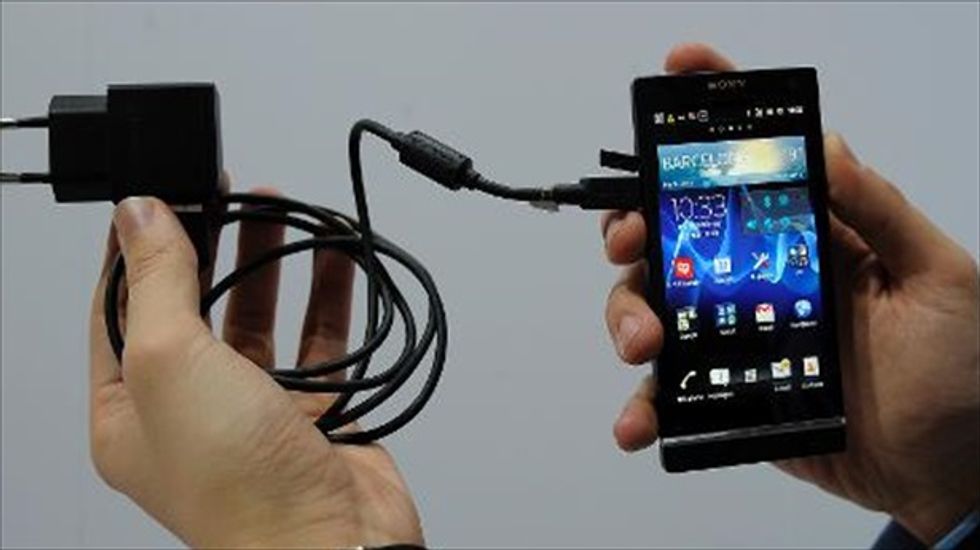 Man displays universal charger plugged in a mobile phone during a presentation at the Mobile World Congress on Feb. 28, 2012 in Barcelona, Spain [AFP]

The European Union took another step on Thursday towards the mandatory introduction of a common mobile phone charger, which could power-up all makes of handsets.

The European Parliament in Strasbourg voted in favour of draft legislation which lists among the "essential requirements" of electrical goods approved by the EU a compatibility with "universal" chargers.

While the bill has the informal backing of the EU's 28 member states, it is now up to the European Commission, the EU's executive, to detail what a common phone charger should look like and the conditions under which it would be imposed on the industry.

If adopted in its current form, the legislation would include all "radio" products, meaning any piece of equipment which receives or emits radio waves with the purpose of communication, including mobile phones, GPS systems, tablets and wireless car door openers.

The Commission said the legislation, which would come into effect in three years' time, was a direct response to consumer concerns.

"We must have a common charger for all mobile phones -- all citizens are in favour of it," said Neelie Kroes, the European commissioner responsible for the bill, adding she will now examine which legally binding measures are required to ensure compliance.

Belgian Socialist MEP Marc Tarabella welcomed the bill's approval, saying it would mark the "end of drawers filled with 1,001 cables and different chargers."

"We want to force manufacturers to make their phones compatible so that a simple, common charger can simplify the life of citizens, while also reducing the costs of purchase and lessen waste," Tarabella said.

If adopted, the legislation would supercede a voluntary system of standardisation created in 2010, following an agreement among phone producers including Nokia, Sony Ericsson and Samsung.

However, Digital Europe, the organisation representing handset manufacturers such as Apple, Blackberry, Motorola and Nokia, warned that the distinction between chargers and connectors, the plug connecting to the appliance itself, was an important one.

"We are committed to industry harmonisation but a lot of our members want to reserve the right to innovate around the connector," said Paul Meller, Connect Europe's communications director.