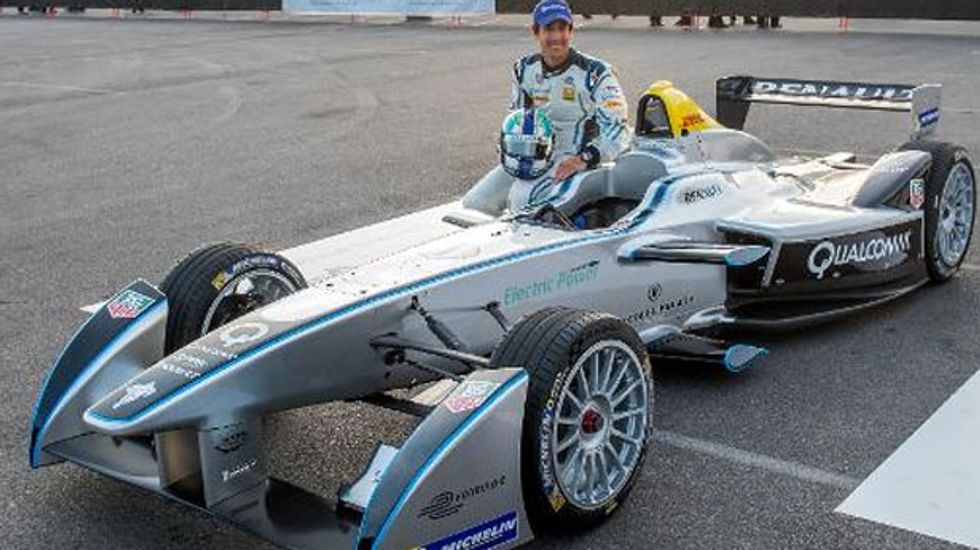 The man behind the new Formula E racing series has insisted fans will love the electric cars' "futuristic" sound after the introduction of quieter engines sparked a row in Formula One.

CEO Alejandro Agag refused to compare the battery-powered engines' sound to F1, but he said they reminded him of the Podracers seen in Star Wars film, "The Phantom Menace".

As Formula E prepares to debut this year, F1's new hybrid engines have been criticised by fans, organisers and top boss Bernie Ecclestone as being simply too quiet for motor-racing.

But Agag told AFP that people would be pleasantly surprised by the sound of the Formula E cars -- and that video will be released online next week to prove it.

"We think the sound of Formula E is going to be a big surprise for everyone. The sounds that comes out is completely futuristic, new, different," he said in a telephone interview.

"Next week we will put video online of the car with the sound and I think this will be quite a shock, the sound that these Formula E cars are making... it's actually quite loud."

He added: "It sounds more like a jet, a fighter jet. Or like the Podracer in Star Wars. So that's the kind of feel we want to give to the fans, much more futuristic. It doesn't sound at all like a combustion engine."

Motorsports enthusiasts are traditionally fans of roaring engines and the row over the new "vacuum cleaner" power units in Formula One has gone right to the top level.

Organisers of last week's season-opening Australian Grand Prix said the engines may be a breach of contract, while Ecclestone pledged to try to make them sound "more like racing cars".

Such perceptions loom as a potential problem for Formula E, a showcase for the potential of electric cars which has high-level backing and now needs to build its fanbase.

Last October, four-time F1 world champion Sebastian Vettel was critical of Formula E, saying "it's not the future" partly because of its expected lack of noise.

"I think people come here to feel Formula One and there is not much to feel when a car goes by and you don't even hear anything but the wind," Vettel said at the Indian Grand Prix.

But Agag said Formula E could be a "game-changer" for motorsports and the car industry when it flags off in Beijing in September, the first of 10 stops around the world.

"The event we think is going to be an eye-opener," he said.

"We want it to be a game-changer for the electric car sector because really the wider public don't have the opportunity to see these cars in action."

He admitted the launch was a "bit early" in some respects with electric car technology still in its infancy.

Cars will race at speeds of about 230 kilometres (142 miles) per hour, slower than F1, and drivers will initially have to switch vehicles twice per race because of the difficulty of changing batteries.

"Remember mobile phones when they were like, one kilo? We are there," Agag said. "We took the decision to jump, basically. We feel like pioneers in a sense," he added.

"We took the decision to go before technology was ready now. Of course, we could have waited 10 years for the perfect solution but then probably somebody else would have already done it."

This year, drivers including Bruno Senna and Jaime Alguersuari will be competing in identical vehicles with the field thrown open to manufacturers in following seasons.

Racing will get underway around Beijing's "Bird's Nest" Olympic stadium and then move on to other high-profile sites including London, Los Angeles, Miami, Berlin, Rio de Janeiro and Monaco.

Underlining rising concerns about pollution worldwide, this week Paris ordered half of all cars off the roads after the French capital was shrouded in a murky haze.

And it is no coincidence that the clean-energy racing series will start in notoriously smoggy China, which also this week declared "war" on the filthy air choking its cities.

"It's a game of changing perceptions (about electric engines)," Agag said. "The broader goal is to finish with combustion (engines) everywhere.

"That's a goal that will take maybe a few years or many years, but we have to start somewhere."