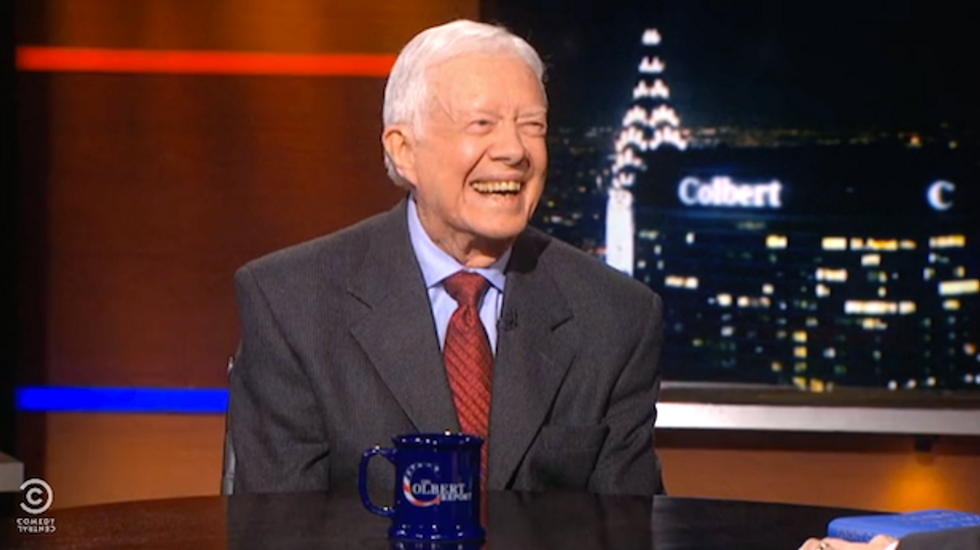 Jimmy Carter says he would consider converting to Catholicism on two conditions.

The first condition, the former president told Stephen Colbert on Tuesday night, is that Pope Francis must remain in office.

The second condition, the lifelong Baptist said, is “when a female Catholic priest asks me to join her church.”

The audience watching the taping of The Colbert Report went wild cheering and began chanting the 39th president’s first name.

Carter appeared on the Comedy Central program to promote his new book, “A Call To Action: Women, Religion, Violence, and Power.”

He told Colbert that he’d written a letter to the pope about the abuse of women, and he said the pontiff replied that he agreed with many of the former president’s concerns.

“He said that in his opinion and the future years, women needed to play a much greater role in the Catholic Church than they were playing now or have played in the past,” Carter said.

Carter said discrimination against women by Christians was puzzling to him.

“If you read the words and actions of Jesus Christ, he exalted women,” Carter said. “He never made any insinuation that women were inferior in any way.”

He said letters written by the apostle Paul to some of the earliest Christian churches were ambiguous on the role of women.

“Some of the words of Paul, who’s our chief religious theologian for Christians, can be interpreted either way,” Carter said. “If you’re a male religious leader, and you want to stay in unchallenged power and not have women challenge yours, then you can pick some of those things that Paul said.”

He said Paul’s letter to the Ephesians was selectively quoted to justify the subjugation of women by demanding that wives obey their husbands.

The beginning of that says, a husband and a wife should respect each other, and then it goes on to the other,” Carter said. “But Paul also wrote the Galatians that there’s no difference in the eyes of God between a woman and a man, between a slave and a master, between a Jew and a gentile. Everyone’s equal in the eyes of God.”

He said there were about 36,000 verses in the Bible, and a person could pick and choose many verses to justify their beliefs.

“That’s what’s great about America,” Colbert said, “is our freedom of religion allows me to interpret the Bible exactly how it fits my worldview already.”