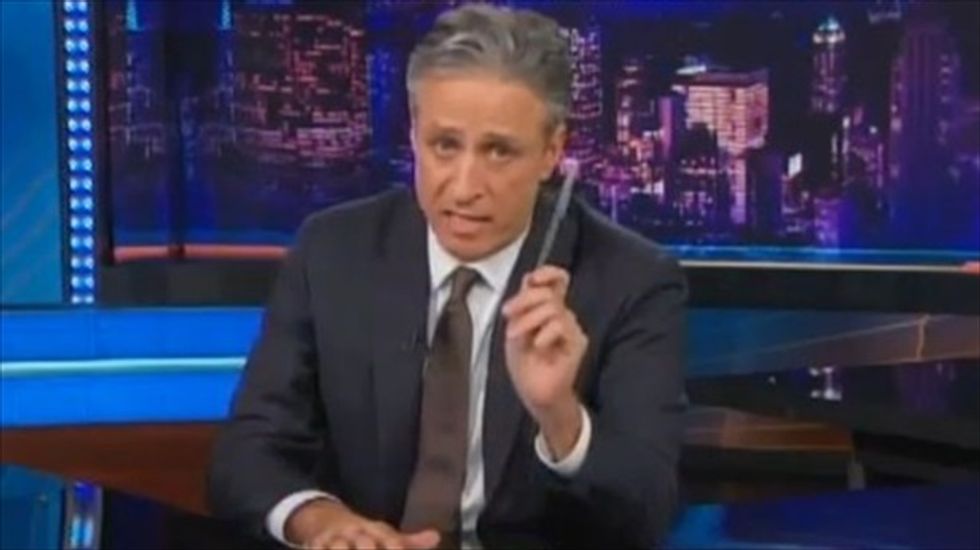 He played a clip showing Fox hosts and guests claiming that such fraud was "rampant," as recipients exchanged food stamps for iPads, cigarettes, and gambling money on Las Vegas trips.

"Yes, you do hear all these stories," Stewart said, repeating a claim by Fox host Gretchen Carlson. "Whether or not they're true or indicative of widespread abuse is not really the point here because you hear them. And as a reporter on a news network, it is your job to pass them along through your mouth hole."

"As your slogan says, 'Fox News: We read the chain emails your grandma gets in her inbox out loud like they were true,'" Stewart said.

Other hosts and guests on the network's programming complained without offering proof that recipients used their food stamps to buy pet food, soda, junk food, and "big chicken legs" at Disney Land.

Fox also extensively covered claims that food stamp recipients were exchanging their public assistance for "gourmet" and "fresh" seafood, such as crab legs -- which Stewart said was apparently considered to be "the Mercedes of food."

"What's with the f*cking fish? What is this?" Stewart asked. "They get wild salmon in the East Village. I've always said poor people's salmon should come in a can from an outer borough."

He noted an inconsistency in the network's coverage of what food stamp recipients should -- or should not -- purchase with their taxpayer-funded public assistance.

"We don't want food stamp recipients eating junk, but we also don't want them taking our nice human food," Stewart said. "What's the right mixture of quality and class-based shame poor people should aim for in their meal planning?"

A Mississippi Republican state senator told the network that food stamps were once used to purchase "staple items," such as flour and meat.

"Flour and meat? Well, looks like it's somebody's birthday," Stewart said. "Steal a ketchup packet from a local establishment and you've got yourself a three-course meal."

"Finally, we have some clarity," he said. "I owe Fox and apology. They don't mind poor people eating seafood as long as the poor people catch the seafood themselves."

But he remained perplexed after another Fox host repeated a claim that a food stamp recipient had exchanged his vouchers for bait to go bass fishing.

"I stand corrected," Stewart said. "For some f*cking weird reason, they really do not want lower-income individuals eating any seafood."

Watch the entire segment posted online by The Week: