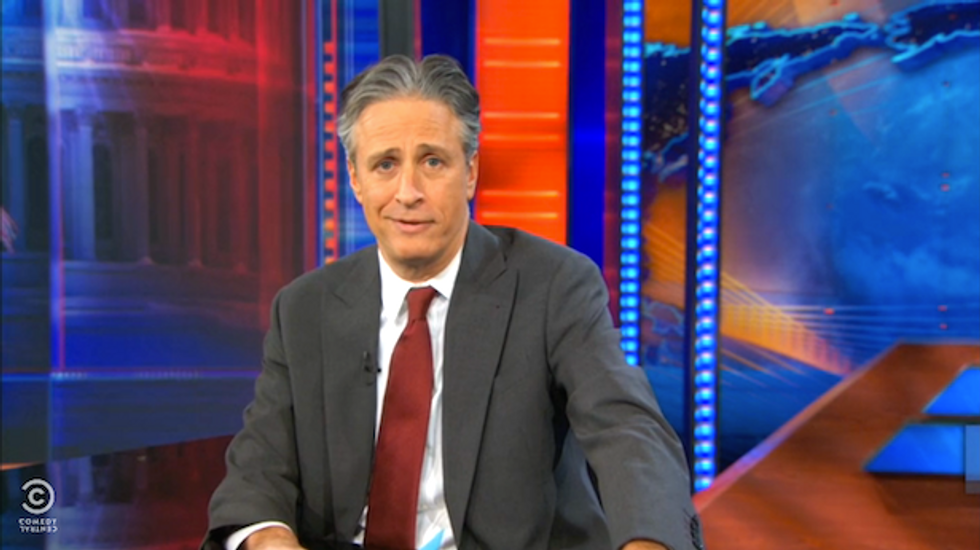 Jon Stewart blasted the argument Wednesday night by conservatives that corporations should be allowed to enjoy the same religious freedoms as human beings.

“America has recently implemented a brand-new health care law designed by our president to kill old people and allow Russia to invade Crimea,” Stewart said. “But some Americans are willing to fight this law all the way to the Supreme Court, (and) while they don’t cite communism and eldercide as the reason for their objection, I think we can read between the lines.”

The “Daily Show” host said the Hobby Lobby craft store opposed the Affordable Care Act mandate that companies must offer contraception as part of their employee health care benefits, arguing that doing so would force the company to violate its "biblical principles."

“I’m a little rusty on the New Testament, (but) the Bible doesn’t mention craft stores,” he said.

The craft store has sued U.S. Department of Health and Human Services Secretary Kathleen Sebelius, asking the U.S. Supreme Court to find the for-profit has the same religious freedom as a church or individual.

“Sure, why wouldn’t – of course, Hobby Lobby wants that!” Stewart said. “They are a pious corporation. There never would be a case emanating from that other craft store, Michael’s. For God’s sakes, that place is a godless f*ck palace with yarn.”

The attorney for Hobby Lobby argued that the government had no compelling interest in contraception coverage, unlike, for example, blood transfusions or vaccination.

“Sure, there’s no compelling interest to Hobby Lobby’s lawyer, Paul Clement,” Stewart said. “He’s got a penis. Babies rarely grow inside of those.”

Justice Anthony Kennedy, who frequently serves as the swing vote on a divided court, focused his questions on employer’s rights, saying that if an employer can be forced to pay for all types of contraception, they could “be forced, in principle, to pay for abortions.”

“Well, right, ‘principle,’” Stewart said. “(But) in fact, it would be the opposite of ‘yes’ for that, which I believe is ‘no.’ Because contraception is not the same thing as abortion. That’s a scientific fact.”

But, under the law, the government cannot question the accuracy of Hobby Lobby’s argument, which views contraceptives as agents that cause abortion.

“So let me get this straight,” Stewart said. “Corporations aren’t just people; they’re ill-informed people, whose factually incorrect beliefs must be upheld because they sincerely believe them anyway. I guess that’s why, at Hobby Lobby, they feed their 16,000 employees with but five loaves and two fish. What? The employees are still hungry? They believe you aren’t.”