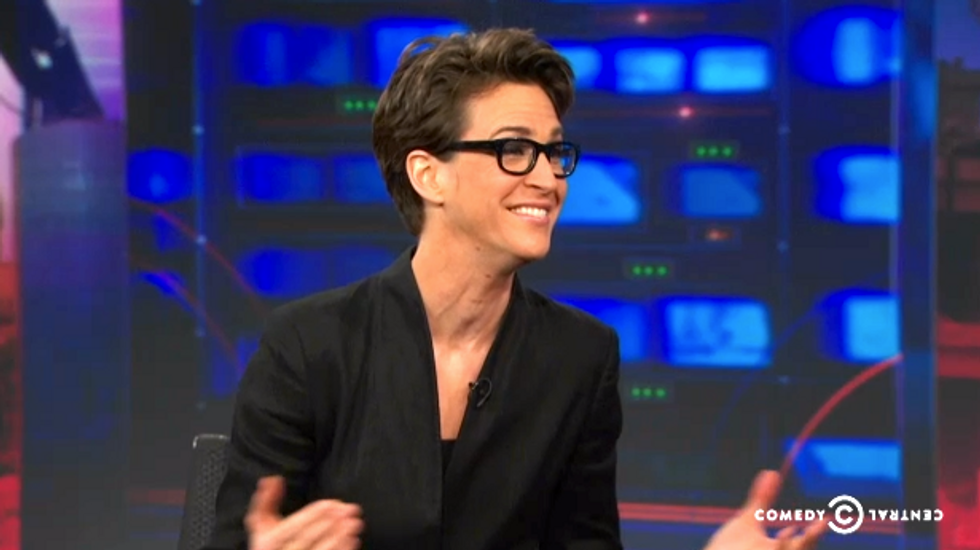 The U.S. cannot escape from its sins in Iraq until it honestly accounts for its reasons for invading the Middle Eastern nation, said MSNBC host Rachel Maddow.

She explained to Jon Stewart on Wednesday night’s “Daily Show” that she made a new documentary, “Why We Did It,” to help examine some of those unanswered questions.

“I did another documentary a little bit more than a year ago about how we were lied to, about how the administration’s case about why we had to go to war in Iraq wasn’t true, and how they sold us a false case,” Maddow said. “It sort of leads right away to the next question, that if the case they made wasn’t really why they wanted to go, why did they really want to go?”

Maddow spoke with some of the architects of the Bush administration’s policy on Iraq, and she found that many of them were eager to atone for their actions a decade later.

“I didn’t know when we started to make the documentary if we’d just be basing it totally on documents and nobody would still talk to us, but it turns out people are willing to talk to us,” she said. “There’s some sort of some unlikely heroes, some people who haven’t been high-profile folks but who were sent over to Iraq, who sort of believed the public case, and then got there and realized, ‘Oh, that’s not why we’re here,’ and have been carrying it with themselves ever since.”

Maddow said many of these former officials realized their association with the Bush administration had killed their political aspirations, which allowed many of them to speak more candidly.

“I think that there’s a desire to hear the truth told,” she said. “I mean, honestly, there are 2 million Iraq War veterans in this country and there’s 4,000 families who lost somebody, and when you think about that, when you look at Wounded Warriors and you look at people who are carrying this with them for the rest of their lives, I think even the people who were part of it in some ways want to see those people hear the truth, and it has never been explained before.”

The mistakes and misdeeds that led the U.S. into war have remained unexamined by design, Maddow said.

“There hasn’t been accountability for those who were wrong the first time,” she said. “The people who said we ought to go, it’s not going to take very many people, it’s going to pay for itself, it doesn’t matter that we’re not going to set up a government, Iraq will be right back on its feet, it’ll be a Jeffersonian democracy in the heart of the Middle East, I mean, those guys – Paul Wolfowitz got to go run the World Bank. Really? Like, you shouldn’t be running a light-rail system in a small town in a country other than this one that we dislike.”

She singled out Bill Kristol as another Iraq War hawk who should have no credibility on national security issues, yet he continues to be invited to share his opinions on current events.

“The reason Iraq still looms over what we do is kind of the original sin of the 21st Century, and until we reckon honestly about why we did it, we’re never going to escape that, and we owe it to ourselves to get past it,” Maddow said.