Mass. cancer patient, too busy being sick to renew a dog license, ends up in jail 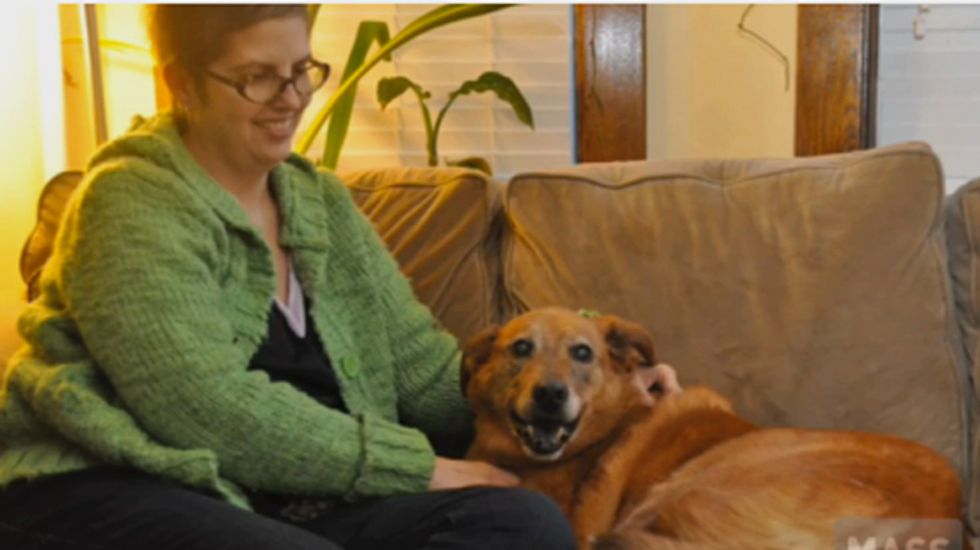 A Massachusetts woman undergoing advanced ovarian cancer treatment was arrested at her home recently for her failure to appear in court after paying a $5 dog license late, resulting in a bench warrant.

According to Mass Live, Ann Musser, 41, was arrested at her home on an outstanding arrest warrant issued by Holyoke District Court for failing to appear in court.

The court appearance was scheduled last September because Musser had failed to comply with repeated requests from the city of Holyoke in June for her to renew the license for Pumpkin, her 14-year-old family dog.

Musser admits failing to pay the $5 renewal fee was an oversight on her part, but she had a lot on her mind at the time. The main thing was the diagnosis for advanced ovarian cancer and having to undergo major surgery.

“Your priorities are a little different when you are fighting death,” said her husband, Ozzie Ercan. “It’s easy to lose track of how important those little pieces of paper are.”

Holyoke City Clerk Brenna McGee explained that, technically, Musser was not arrested for failing to renew her dog license, but for her failure to appear before a judge.

McGee explained that her office sends out three late notices, requesting payment within 21 days. When the 21 days are over, the matter is forwarded to District Court. Dog owners are then summoned to appear in court, and if they fail to show, the courts issue an arrest warrant.

Musser did go to the clerk’s office and paid the $5 renewal and $25 late fee on Sept. 13, McGee said. By then , however, a warrant had already been issued by the courts for her arrest.

"We have nothing to do with that. Once a warrant is issued, it is out of our hands.”

Musser explained that she attempted to go to the courts in September to take care of the warrant, but felt the process she was required to go through was dangerous to her health..

She said she is at a stage in her treatment where she is neutropenic, or has a very low white blood cell count putting her at high risk for opportunistic infections or illness.

Saying her doctors have warned her that being in an ordinary crowd puts might her in danger, Musser said, “I don’t even go to the movies any more.”

To take care of the warrant, she was told  she would have to wait in a crowded courtroom until she was called up before the judge, despite telling court staff about the risks to her health, however her protests fell on deaf ears, she left after waiting for three hours.

On Friday her husband left the house but returned to get his drivers license and was pulled over by a state trooper just as he was about to turn into his driveway. After presenting the trooper with his license, Musser was asked for hers, and when she presented it, that is when she was informed of her arrest.

Informed of her medical condition and vulnerability to infection, Musser said, "They said, 'There's nothing we can do. Sorry, we're going to have to arrest you.'"

The troopers allowed her the opportunity to make sure her children were not watching, then she was handcuffed and in the back of a cruiser.

Musser was booked and the transferred to the Hampshire County House of Correction where she was held until her husband bailed her out 4 ½ hours later.

Musser said that she believes that the troopers didn't know the reasons behind her warrant until after they got her to the state police barracks and ran her name through a computer.

“I could overhear them saying ‘I didn’t know you could be arrested for that.’”

The following Monday Musser appeared in court with all of her documentation, only to be told by a court clerk to wait.

“So I said while I’m sitting here, I’m going to make phone calls to see who I can find who would be interested in hearing about how a woman with advanced-stage cancer was arrested Friday night and is now sitting in a courtroom the Monday afterward.”

Musser said the clerk went to her phone, and a few moments later someone came out to help her and the warrant was withdrawn without her having to appear in the courtroom.

But she got a paper copy anyway.

“I have the piece of paper in case anyone does try to arrest me again,” she said.

Watch the Mass Live video below: