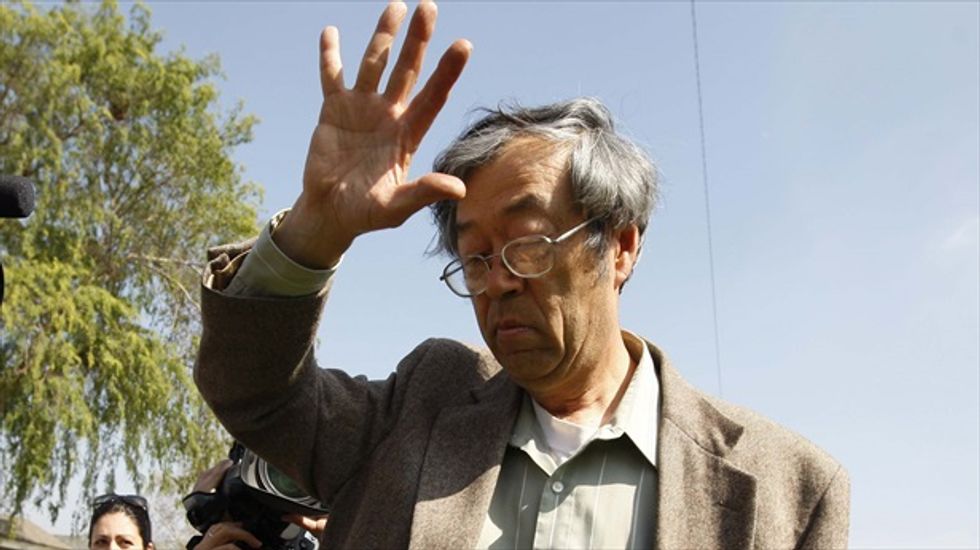 By Aron Ranen and Brandon Lowrey

TEMPLE CITY, California (Reuters) - A Japanese American man thought to be the reclusive multi-millionaire father of Bitcoin emerged from a modest Southern California home and denied involvement with the digital currency before leading reporters on a freeway car chase to the local headquarters of the Associated Press.

Satoshi Nakamoto, a name known to legions of bitcoin traders, practitioners and boosters around the world, appeared to lose his anonymity on Thursday after Newsweek published a story that said he lived in Temple City, California, just east of Los Angeles.

Newsweek included a photograph and a described a short interview, in which Nakamoto said he was no longer associated with Bitcoin and that it had been turned over to other people. The magazine concluded that the man was the same Nakamoto who founded Bitcoin.

Dozens of reporters, including a sprinkling of Japanese media, encircled and camped outside the man's two-story house on Thursday morning, accosting the mailman and repeatedly ringing the doorbell, to no avail. Police cruisers drove by several times but did not stop.

Several times, someone pulled back the drapes on an upstairs window.

In the afternoon, the silver-haired, bespectacled Nakamoto stepped outside, dressed in gray sport coat and green striped shirt, with a pen tucked in his shirt pocket. He was mobbed by reporters and told them he was looking for someone who understood Japanese to buy him a free lunch.

Newsweek estimates his wealth at $400 million.

"I'm not involved in Bitcoin. Wait a minute, I want my free lunch first. I'm going with this guy," Nakamoto said, pointing at a reporter from AP.

"I'm not in Bitcoin, I don't know anything about it," the man said again while walking down the street with several cameras at his heels.

He and the AP reporter made their way to a nearby sushi restaurant with media in tow, before leaving and heading downtown. Los Angeles Times reporter Joe Bel Bruno followed the pair and described the chase in a running stream of tweets. Eventually, the pair dashed into the Associated Press offices in downtown Los Angeles, where reporters are still waiting for Nakamoto to emerge.

Fans see Bitcoin as a digital-world currency beyond the government interference, while critics, whose ranks swelled with the recent close of major bitcoin exchanges Mt. Gox, see a risky investment whose anonymity aids drug dealers and other criminals.

Nakamoto kept a low profile in part to avoid attention of authorities, Newsweek said, and indeed on Thursday the office of Benjamin Lawsky, superintendent of New York's Department of Financial Services, was keen on speaking with him, a source familiar with the situation told Reuters.

Bitcoin is bought and sold on a peer-to-peer network independent of central control. Its value soared last year, and the total worth of bitcoins minted is now about $7 billion.

In the Newsweek article, Nakamoto was credited by Bitcoin's chief scientist, Gavin Andresen, in working out the first codes behind the currency.

A man of few words who refused to discuss anything beyond the currency or even communicate outside of email, Nakamoto was described by his brother in the Newsweek article as "fickle and has very weird hobbies," including a penchant for model trains.

The Japanese-born Nakamoto displayed an unusual aptitude for math as a child. He immigrated with his mother to California in 1959. He was worked for defense and electronics company Hughes Aircraft, but never discussed work because much of it was classified, according to Newsweek interviews with several friends and relatives.

"He's very focused and eclectic in his way of thinking. Smart, intelligent, mathematics, engineering, computers. You name it, he can do it," Newsweek quoted Arthur Nakamoto, his younger brother, as saying.

[Image: A man widely believed to be Bitcoin currency founder Satoshi Nakamoto is surrounded by reporters as he leaves his home in Temple City, California March 6, 2014. By David McNew for Reuters.]