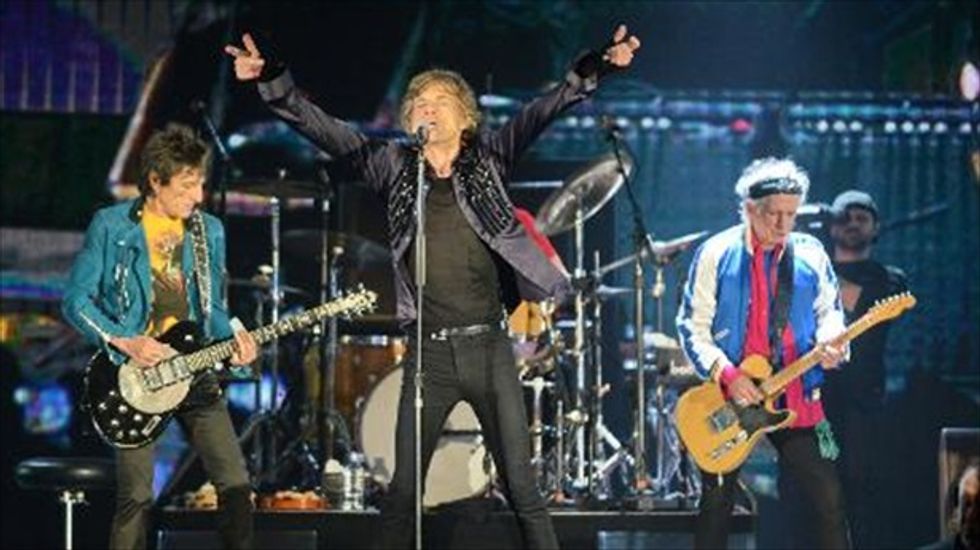 The Rolling Stones perform during a concert at the Marina Bay Sands in Singapore on March 15, 2014 [AFP]

The Rolling Stones on Tuesday postponed indefinitely their tour of Australia and New Zealand with frontman Mick Jagger plunged into grief over the suicide of girlfriend L'Wren Scott.

Jagger, who was expected to head to New York, said he was "struggling to understand" Scott's death as it emerged her fashion design business was grappling with multi-million-dollar debts.

"The Rolling Stones are deeply sorry and disappointed to announce the postponement of the rest of their 14 ON FIRE tour of Australia and New Zealand," they wrote on their website.

"Mick Jagger, Keith Richards, Charlie Watts and Ronnie Wood wish to thank all of their fans for their support at this difficult time and hope that they will fully understand the reason for this announcement," it added.

The band said they would reschedule concerts in Perth, Adelaide, Sydney, Melbourne, Brisbane and Auckland at a later date, asking ticket holders to hold on to their tickets until further notice.

The opening leg of the Australian tour was to have begun in Perth on Wednesday.

In a blog post on his website, a day after 49-year-old Scott was found dead at her luxury New York apartment, he described the former model as not only his lover but his best friend.

"I will never forget her," Jagger, 70, wrote under a post entitled "L'Wren", featuring a black and white photo of Scott.

"I am still struggling to understand how my lover and best friend could end her life in this tragic way," Jagger wrote.

"We spent many wonderful years together and had made a great life for ourselves. She had great presence and her talent was much admired, not least by me.

"I have been touched by the tributes that people have paid to her, and also the personal messages of support that I have received. I will never forget her."

Scott and Jagger, who was 21 years older, had been dating for well over a decade.

A spokesman for Jagger angrily dismissed reports in the New York Post tabloid citing an unidentified source which said the rocker had recently broken up with Scott.

"This is a complete and utter fabrication and a result of ill-informed gossip at this tragic time for Mick. It is absurd and not true," Jagger spokesman Bernard Doherty said.

Scott's former housekeeper told New York Daily News that the designer spoke of wanting to get married and have a family, but never wanted to put pressure on Jagger.

New York coroners performed an autopsy on Scott's body Tuesday to pinpoint the precise of cause of death.

"We may have the results immediately today or maybe we need further tests," a spokesperson for New York's chief medical examiner's office said.

The elegant six-foot, four-inch (1.93m) designer was found hanging by a scarf at her Chelsea apartment in Manhattan on Monday, according to police.

Police sources indicated that they had not found a note or letter near her body.

It emerged that Scott's business had large debts at the time of her suicide according to latest accounts filed in Britain.

LS Fashion Ltd ran a loss of $5.9 million as of December 31, 2012, said the accounts lodged with Britain's Companies House last October and obtained by AFP.

Last month, Scott cancelled her show at London Fashion Week because of production delays, but there had been little public sign that anything more serious was wrong.

Her body-hugging and figure-flattering dresses were loved by Hollywood stars and First Lady Michelle Obama alike.

Born in Utah, Scott was adopted by Mormons and worked in Paris as a model before moving to Los Angeles, where she began to work as a stylist and a costume designer for films.

She launched her own label, stocked in some of the world's most exclusive shops, in 2006.

In a relationship for well over a decade with Jagger, Scott appeared to give the ageing rocker a degree of romantic stability despite the couple's age gap.

Before meeting Scott, the well-known lothario had a multitude of affairs and has fathered seven children with four women.