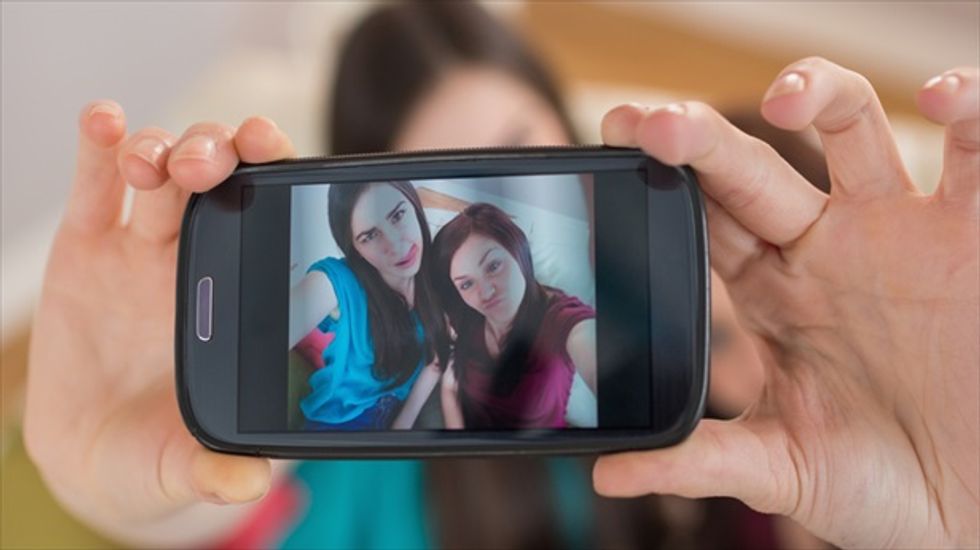 'Two Happy Friends On The Couch Taking A Selfie With Smartphone' [Shutterstock] http://tinyurl.com/pv58yp5

Sony Corp is counting on the boom in smartphones and the market's voracious appetite for megapixels -- vital to better quality video calls and "selfies" -- to sustain the double-digit revenue growth in its image sensor business.

Imaging -- both cameras and sensors -- is one of three pillars along with Xperia smartphones and PlayStation consoles that the company is leaning on to stop the hemorrhaging at its flagship electronics division. Sony expects its sales of imaging sensor chips to jump 16 percent to $3.52 billion in the year ending this month.

Sony dominates the imaging sensor segment. Its high-end imaging chips are the "film" in the main cameras of both Apple Inc's iPhone 5S and Samsung Electronics Co Ltd's Galaxy 4, according to a break-down analysis of those products.

But now, some smartphone makers are upgrading their front-facing cameras for users who want sharper self-portraits, and that has opened up a whole new market for Sony, Okamoto said.

The division could get an even bigger profit boost from its nascent business making high-margin camera modules, which include lenses and circuitry as well as sensors, while tablets as well are joining the bandwagon towards more megapixels and higher resolutions.

Despite its lead in sensor technology, however, Sony faces a rising threat from a familiar rival - Samsung Electronics. The South Korean tech giant has hammered Japanese electronics makers in businesses from TVs to memory chips.

Samsung's newest flagship smartphone, the Galaxy S5, is due to be fitted with an image sensor developed and manufactured in-house by the South Korean company, with Sony no longer the main supplier.

"Our strength -- and Samsung's -- is that we can accumulate expertise on our own production lines," Okamoto said.

"The fact that Samsung makes their own products on their own line with their own technology, that's a threat," he told Reuters in an interview last week.

Sony is looking to expand its sensor production capacity next year with a factory in northern Japan it agreed to buy from struggling chipmaker Renesas Electronics Corp for a total investment of $342 million including new equipment.

Sony has calculated that capacity at its existing factories would be unable to keep up with demand by mid-2015, even with a drop in demand for compact camera sensors, Okamoto said.

Sony and smartphone memory chip maker Toshiba Corp are the only big Japanese chipmakers expanding production, while Renesas has restructured to focus on automotive chips and Panasonic Corp has sold most of its chip plants to foreign players.

Sony says its image sensor business is turning a profit, while other major divisions such as TVs and PCs are in the red and the company as a whole expects a 110 billion yen net loss for the year to March 31.

Sony says its global market share for smartphone image sensors is at 44 percent, mainly in the back-facing cameras used to snap photos. Screen-side sensors tend to be of lower quality, and that market is led by Omnivision Technologies Inc, the No.2 in market share. Samsung is third, according to Techno Systems Research Co, a Tokyo-based market researcher.

As Sony grabs more sensor business in screen-side cameras and in Chinese smartphones from fast-growing manufacturers such as Xiaomi that tout high-end, made-in-Japan parts as a selling point, Sony's device business is increasingly tied to the smartphone market.

But Okamoto plays down worries that smartphone growth might peak out within the next few years, citing a number of other promising markets for image sensors.

"Our hope is that wearables are next. We also expect to see increasing demand for sensors used in medical devices, autos, and in agriculture," he said.

[Image: Two Happy Friends On The Couch Taking A Selfie With Smartphone via Shutterstock]