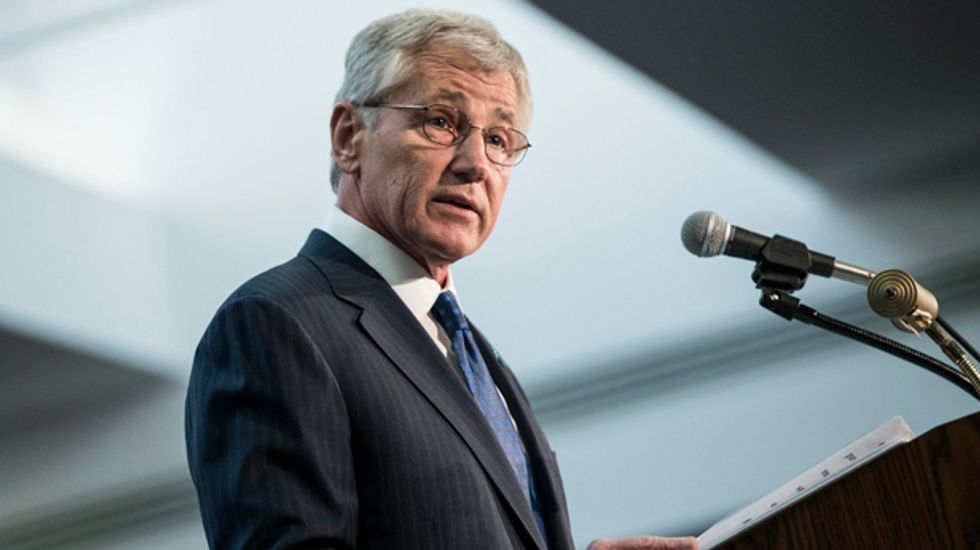 Former U.S. Secretary of Defense Chuck Hagel speaks during a retirement ceremony at the National Security Agency in Fort Meade, Maryland March 28, 2014. Hagel, pushing for openness ahead of a trip to China, said on Friday in an unusual live broadcast from a secretive base the Pentagon would exercise restraint in using the military in cyberspace and urged other nations to do so as well. REUTERS/Brendan Smialowski/Pool (UNITED STATES - Tags: MILITARY)

WASHINGTON (Reuters) - U.S. Defense Secretary Chuck Hagel has sent America's top general in Europe back early from a trip to Washington in what a spokesman on Sunday called a prudent step given Russia's "lack of transparency" about troop movements across the border with Ukraine.

General Philip Breedlove, who is both NATO's Supreme Allied Commander Europe and the head of the U.S. military's European Command, had been due to testify before Congress this week. Instead, he arrived in Europe Saturday evening and will be consulting with allies.

"(Hagel) considered Breedlove's early return the prudent thing to do, given the lack of transparency and intent from Russian leadership about their military movements across the border," Rear Admiral John Kirby, a Pentagon spokesman, told Reuters, which was first to report the decision.

"More broadly, he felt it was important for Gen. Breedlove to continue our efforts to consult with NATO allies, and to discuss specific ways to provide additional reassurance for our NATO allies in Eastern Europe."

U.S. officials, speaking last week on condition of anonymity, expressed deep concern about the massing of what they estimate are up to 40,000 Russian troops on Ukraine's border. That is stoking concerns in Washington and elsewhere that Russia is preparing a wider incursion into Ukraine after its annexation of Crimea.

The United States and EU have meted out two rounds of sanctions on Russia, including visa bans and asset freezes for some of Putin's inner circle, to punish Moscow, and they have threatened further actions.

The U.S. military has also taken steps to reassure NATO allies, increasing the number of U.S. aircraft in regular NATO air patrols over the Baltics and beefing up a previously planned training exercise with the Polish air force. More steps are being considered.

Breedlove will meet with NATO foreign ministers at their April 1-2 conference in Brussels.

"The general's return will allow him more time to confer closely with his staff and our allies and partners, and to better advise senior leaders," Kirby said.

Hagel made the decision to send Breedlove back to Europe on Friday night, he said.