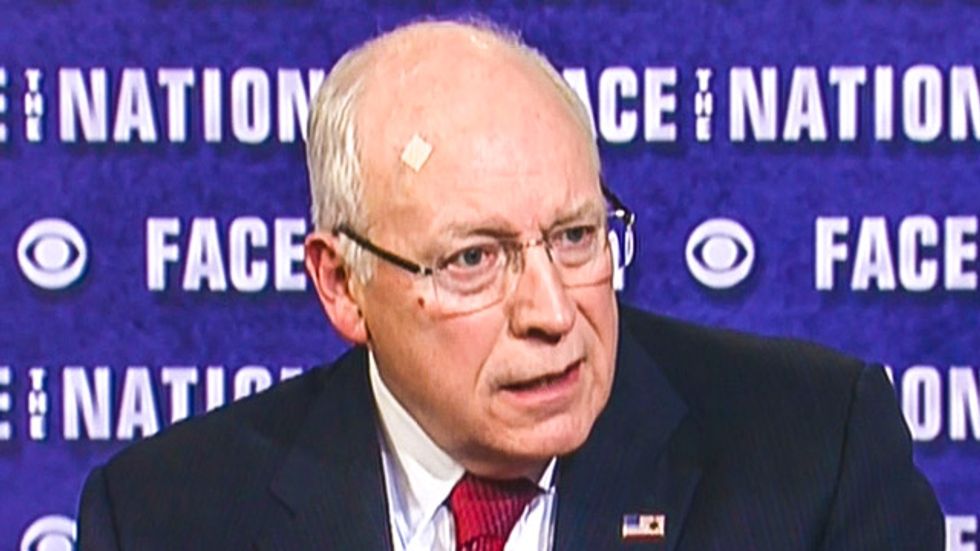 Former Vice President Dick Cheney on Sunday cited treaty violations by Russian President Vladimir Putin as a reason that the U.S. should consider "military options" in response to the invasion of Ukraine.

"I worry when we begin to address a crisis, the first thing we do is we take options off the table," Cheney told CBS host Charlie Rose. "I don't think the administration should do that."

"In a sense, [the Obama administration said] no military," he continued. "He seemed to operate that way most of the time. There are military options that don't involve putting troops on the ground in Crimea. We could go back and reinstate the ballistic missile defense program."

Cheney pointed out that Putin had violated commitments "like the Budapest Memorandum, when Russia, the U.S. and Britain guaranteed the borders of Ukraine in return for Ukraine giving up their nuclear weapons. Very important. And Putin is just blowing that off."

"The real question is how much do you want to allow Putin to ignore those agreements -- very, very important agreements -- that ended the Cold War, led to the unification of Europe and the liberation of millions of people?" he asked. "I do not believe we should allow him to do that without paying a price."

As vice president of the United States, Cheney was accused of violating United Nations Convention Against Torture with his support for waterboarding and other enhanced interrogation techniques of alleged terrorists.

"In ratifying the Convention Against Torture and Other Cruel Inhuman and Degrading Treatment in 1994, the Senate defined 'cruel, inhuman and degrading' as any practice that would violate the Fifth, Eighth or 14th amendments," a Washintgon Post editorial noted in 2005. "Interpreting the Constitution as permitting waterboarding in secret prisons is, to most experts outside the administration, legally outrageous and politically untenable."

"They want to give themselves the authority to commit human rights abuses without having to explain or justify themselves to the public, the world -- or an impartial court."

Watch the video below from CBS' Face The Nation