All the world's a stage for Shakespeare's 450th birthday 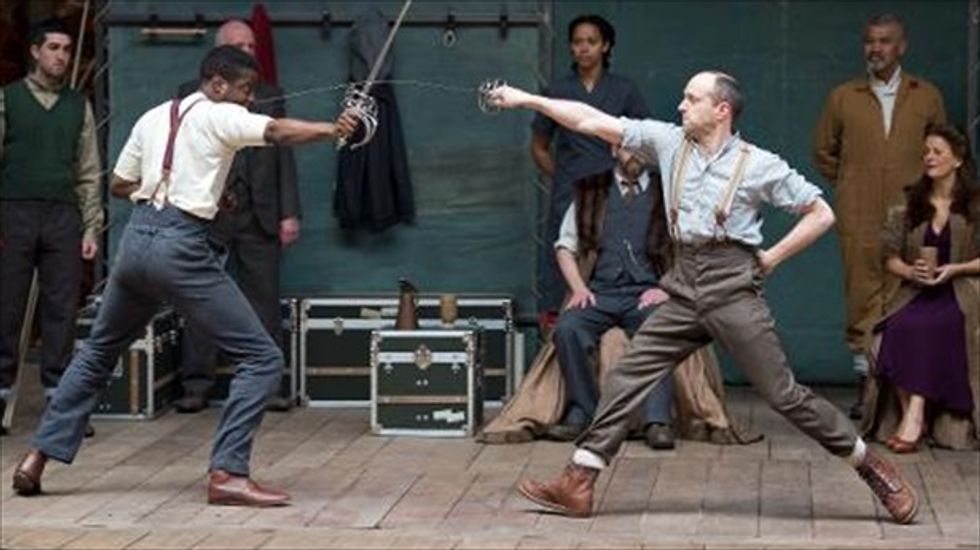 Members of the cast of a new touring production of William Shakespeare's 'Hamlet' perform at the Globe theatre in London on April 23, 2014 [AFP]

William Shakespeare's plays are to be performed in mid-air as Britain celebrates the 450th anniversary of his birth this week, while a tour of "Hamlet" aims to reach every country on Earth.

Shakespeare, the English language's greatest playwright, was baptised on April 26, 1564, and his birthday is traditionally observed on April 23.

The anniversary is being marked with attempts to bring the legendary bard to fresh audiences and capitalise on one of Britain's best cultural exports.

The Reduced Shakespeare Company comic troupe was to attempt to set a world record on Wednesday by performing a one-hour version of his complete works at 37,000 feet (11,300 metres).

They were to perform on an easyJet flight from London to Verona in Italy -- where some of Shakespeare's plays were set.

Back on the ground, the Royal Shakespeare Company was to launch a fireworks display from the roof of their theatre in Stratford-upon-Avon, Shakespeare's home town, to mark his birthday after Wednesday night's performance of "Henry IV, Part 1".

Shakespeare's Globe, the re-creation of his wooden theatre on the banks of the River Thames in London, is launching a two-year tour of "Hamlet" that will take in around 200 countries.

Naeem Hayat is one of two actors who will play the title role, reciting the tragedy's "To be or not to be" soliloquy, one of the most famous passages in the English language.

"'Hamlet' as a story is such a beautiful, human story full of discovery and humanity, people will be able to relate to it regardless of where we are and what language they speak," the Londoner told AFP.

The tour begins Wednesday at The Globe, and will finish with a performance at Elsinore Castle in Denmark -- where the tale of deferred revenge is set.

In between, it will play in national theatres, on the beach in Nauru and the Bahamas; in Greek and Roman amphitheatres; on a roundabout in Romania, and will inaugurate Poland's Gdansk Shakespeare Theatre.

It will also play in a Lithuanian royal palace; in the main square in Marrakesh; in Norway's Tromso, north of the Arctic Circle; and at a theatre built into the rainforests of St Lucia.

The company is touring with a stripped-down set. Each actor has a case with their suitcase, costumes and props in, and the containers will be used as part of the set.

Canvas screens form the backdrop, with musical instruments and coats hung on them to fill in the scene.

"So much of what you do is informed by the audience and that's going to be a wonderful thing, to have that energy change at every place we go," said Hayat.

"There will be a constant fresh energy and that's an absolute dream for an actor."

A survey of young adults across Brazil, China, Germany, India and the United States, for the British Council cultural agency, found that Shakespeare was the name they most associated with British culture -- way ahead of Queen Elizabeth II and football icon David Beckham.

"As the most widely read and studied author in the English language, Shakespeare provides an important connection to the UK for millions of people around the world," said chief executive Martin Davidson, announcing plans for an international festival in 2016.

Four and a half centuries on from Shakespeare's birth, it is "shocking how relevant, pertinent and powerful he still is", said the Globe's artistic director Dominic Dromgoole.

"I can only see that continuing... because there's now a huge enthusiasm for Shakespeare in China, and it's growing in India."

"On the one hand, it's really simple. He talks about characters and situations that we recognise and in that sense he speaks to the part of us that we know in ourselves, and that we see around us," she told AFP.

"On the other hand, there's a certain air of mystery. There's something he does with his writing that keeps people coming back."