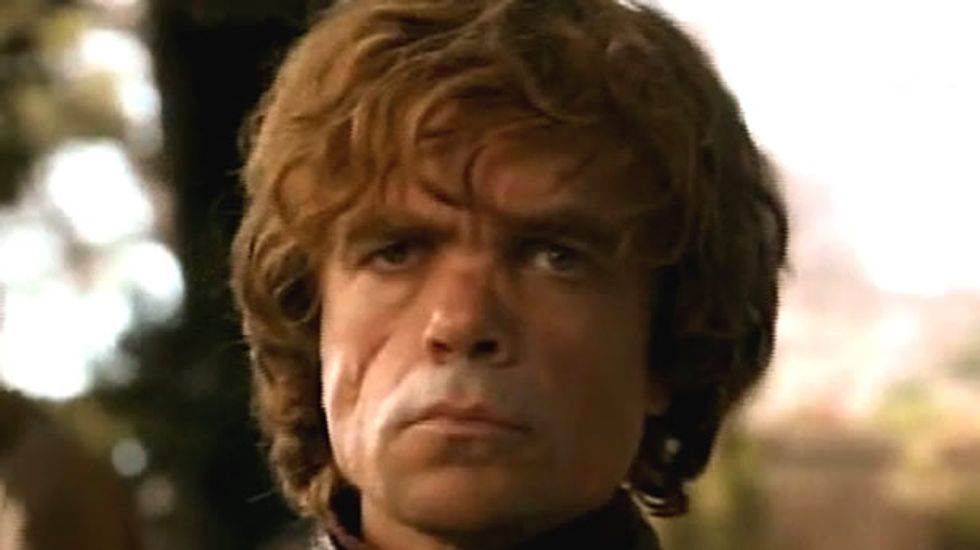 The season premier of Game of Thrones begins, symbolically, where the last season ended -- with the destruction of all things related to House Stark. First, the sword that took Ned Stark's head -- which just so happened to be his own -- is melted down and re-forged into the "Two Swords" of the title, one of which is destined for Tywin Lannister's son Jaime, the other his grandson, Joffrey.

Just in case viewers missed the symbolism, director and series producer D.B. Weiss has Tywin toss a wolf pelt onto the fire that heated the coals that melted the swords.

The Starks have gone the way of the Baratheons, as Weiss makes obvious when he recapitulates a table-setting scene from the Season One episode, "You Win or You Die." In that scene, the audience is introduced to Tywin Lannister, who is "cleaning" the carcass of a stag and complaining that his son, Jaime, has been a poor example of Lannister for not having taken care of Robert Baratheon in a more timely, thorough fashion. Being a Lannister is a gift of birth that, Tywin believes, Jaime is squandering.

Three seasons later, Tywin hasn't changed his mind. This time the gift is literal -- one of the valyrian swords forged before the opening credits -- but the complaint is still the same, since the right-handed, right-handless Jaime can't use it. After Jaime tells his father that he will not leave the King's Guard, Tywin allows him to keep the sword but only, it seems, because he believes it will serve as a perpetual reminder of the bloodline he's squandering.

Speaking of sons who disappoint the Lannister patriarch, Weiss then cuts to a scene of the youngest, Tyrion, waiting outside King's Landing for the arrival of a Dornish prince for King Joffrey's wedding. When the Dornish entourage arrives, he's informed that not only will the wrong Dornish prince be attending the wedding, but that Prince Oberyn arrived before dawn and had already taken up residence in Littlefinger's whorehouse.

In the bordello, it quickly becomes apparent that there's something very different about the Dornish -- and it's not just that they're all, apparently, bisexual. After he's chosen the women and men he wants to bed, Oberyn hears someone singing "The Rains of Castamere" off-screen. A look comes across his face, and it's a familiar one, if one that never augurs well.

[NOTE TO READERS: Should you ever hear the opening bars of the official anthem of House Lannister, do yourself a favor and just start running.]

After a brief exchange, the Lannister lackey stares Oberyn down and says, "Gods, look at this one" in much the same way a GOP congressional candidate talks about "those people."

"Why are you wasting a woman like this on a Dornishman," the Lannister flunky asks. "Why not just bring him a shaved goat and a bottle of olive oil?" Oberyn takes unkindly to the unsubtle implication, gathers himself for a moment, then pins the man's hand to the table with a short sword just as "the King's own 'Uncle Imp'" enters the room.

Oberyn and Tyrion exit Littlefinger's establishment to rehearse the long, terrible history their families share. Tyrion seems genuinely interested in currying favor with the Dornish prince, but Oberyn is having none of it. He reminds Tyrion that "Gregor Clegane, 'the Mountain,' raped [his sister] and split her in half with his great sword."

"I wasn't there," a pitying, pitiful looking Tyrion replies.

"But if the Mountain killed my sister, your father gave the order," Oberyn replies. "Tell your father I'm here, and tell him that the Lannisters aren't the only ones who pay their debts."

That ominous bit of foreshadowing out of the way, the scene shifts to Essos, where Dany is enjoying a pleasant picnic with her increasingly large dragons: 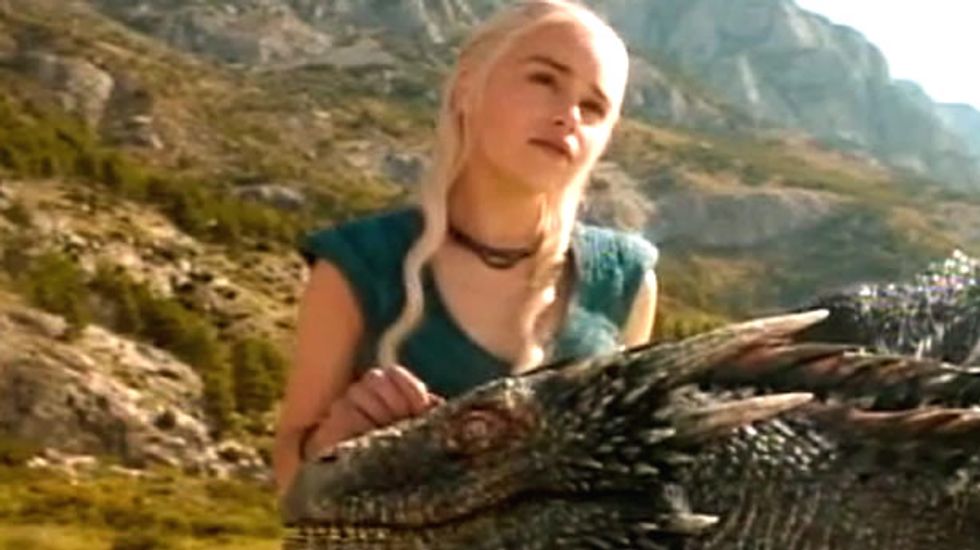 That tender moment ends quickly enough, as a dragon-fight over a carcass of some kind ensues. After Jorah Mormont reminds her, yet again, that dragons are dangerous, can't be tamed, so don't even try -- after he does that again, she walks off to find Daario Naharis, who's engaged in a symbolic-of-nothing sword-holding contest with Grey Worm, the leader of her army of Unsullied. She informs them both that neither will be riding alongside her when the army marches, because she'd rather be accompanied by men a little more secure in their masculinity.

Then begin the trials of poor Tyrion in earnest. First, he must listen to his wife, Sansa Stark, recount the many horrible things his father ordered done to her mother and brother. Then, he must meet up with her current handmaiden -- his former paramour, Shae -- and disappoint her by adamantly refusing to engage with her sexually.

Tyrion, clearly, is in a mood.

So, too, is his brother Jaime, who is being fitted for a gold-plated hand that's as pretty as his valyrian sword and just as useful. While being fitted, his sister-lover Cersei drinks circles around him while recounting all the many ways in which he's disappointed her.

"You come back after all this time with no apologies and one hand and expect everything to be the same?" she asks.

"What do you want me to apologize for?"

"For leaving me," the ingrate replies.

"You think I wanted to be taken prisoner?" he asks.

"Don't know what you wanted, you weren't here," she replies.

The pair prattle on, bewilderment bashing against the sharp rocks of ingratitude, until the scene mercifully shifts just south of the Wall, where a powerful new threat to Westeros lumbers across the screen. Who are they? Why are they so big? What's with the crow-eating cannibalism?

The crows of the Night's Watch would probably like to know, but unfortunately, they're too busy putting Jon Snow on show-trial for obeying direct orders. Standing before a tribunal comprised of fellow members of the Night's Watch, Snow tries to communicate the magnitude of this new threat.

"While we sit here," he says, "debating which rules I broke, Mance Rayder marches on the Wall with an army of 100,000." Fresh from being stripped of his lands, titles and honor by Tyrion, Janos Slynt takes the lead in this mock trial after Snow starts belittling him.

"Have you ever been beyond the Wall, sir?" Jon asks.

"And now you're here. You must not have been very good at your job," Jon says, clearly trying to make a good impression on the once-impressive Slynt.

"How dare you?" Slynt replies, before asking his fellow judges why they ought to listen to "the bastard."

"Because he's telling the truth," another of the judges, Aemon, replies.

"And you always know when a man is telling a lie? How did you acquire this power?" Alliser Thorne asks.

"Because I grew up in King's Landing," Aemon says, dropping the mic as he shuffles away.

And shuffling is the cause of the moment, because just as Aemon shuffles off-screen, Brienne of Tarth shuffles on, interrupting Margaery and Olenna Tyrell's conspiratorial brunch in King's Landing. "You are singular," Olenna tells the lumbering woman with the hanging head who's barely able to choke out a request for audience with Margaery.

As they walk back towards King's Landing, Brienne informs Margaery that "a shadow with the face of Stannis Baratheon" murdered her ex-husband Renly, a point which is likely important, but quickly dropped as the two walk past a statue of a King Joffrey standing astride an arrow-pierced wolf -- because, as everyone who watches the show knows, King Joffrey is personally responsible for every military victory accomplished by the underlings he so despises.

Like his uncle-father, Jaime, whom Joffrey spends the entire next scene tormenting. Given the events at the Red Wedding, one might think that Joffrey would take a little more interest in the security arrangements being made for his wedding -- but this is Joffrey, so of course he doesn't. Why ensure a long, happy life full of fucking and breathing when you can torment the man you don't even realize is your father? And torment he does, chiding him -- without a hint of irony -- for failing to have accomplished anything in his 40-odd-years of life.

At which point, director Weiss cuts from the King who's done nothing in Westeros to the Queen who's already played Abe Lincoln to the slaves of Essos. Dany receives flowers from a humbled Daario Naharis and a string of dead slaves, strung out one-per-mile along the entire road to Meereen, from someone, presumably, in Meereen.

She is, needless to say, unimpressed, then does that thing with her face that she does when she remembers she's the only one with dragons.

The camera cuts away, and suddenly the audience finds itself in a particularly violent episode of Scooby Doo: 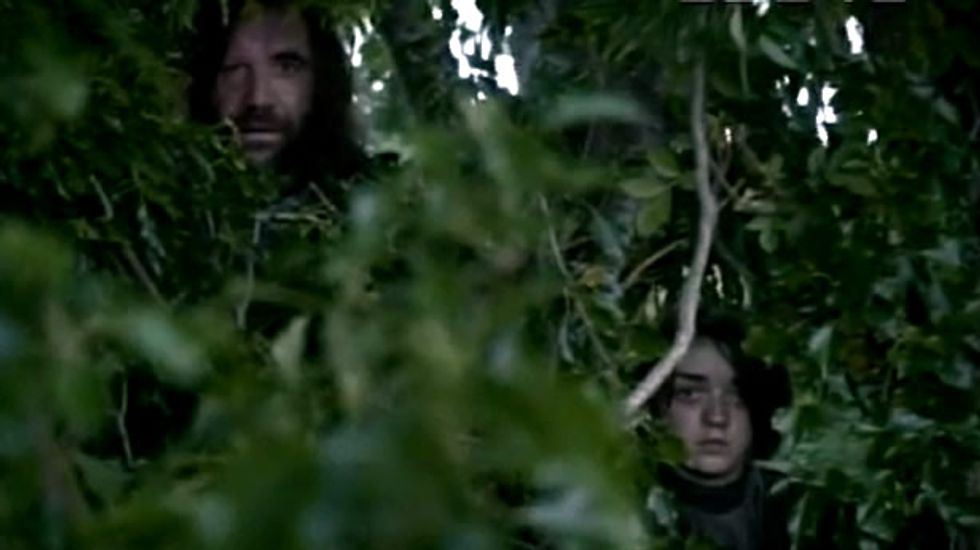 From their place in the trees, Arya Stark and her erstwhile Hound investigate a lodge that, likely as not, could provide them with food. Arya spies the man who killed her friend, Lommy, and darts in before the Hound can stop her. Once inside, the brigand offers the Hound a place among his men in exchange for allowing them to have a go at Arya.

The Hound declines, then begins playing a game of "chickens" in which, every time "the talker" annoys him, he demands another chicken. The game escalates, the Hound starts channeling dialogue from Deadwood, and violence ensues.

Needless to say, Arya and the Hound walk away with all the chickens.

If one thinks about the beginning and end of "Two Swords" as bookends -- and on Game of Thrones, one should -- the fate of House Stark seems somewhat less grave at the end of the episode than it did at the beginning. Arya's taken some revenge and earned herself a pony, Joffrey's being careless with his wedding preparations, and Jon Snow's ascending the ranks of the Night's Watch with aplomb.

This isn't to say that the episode ends happily, only that its anti-Lannisterian arch is thoroughly gratifying. Tywin will never be as happy as he was when the episode began, melting down the titular "Two Swords" for the son he thinks will obey him and the grandson he believes will secure the kingdom for his family. In a sense, what began as an episode of House Lannister triumphant ends with a strong note crumbling and peril.

Which has been, for this viewer, well-deserved and a long time coming.