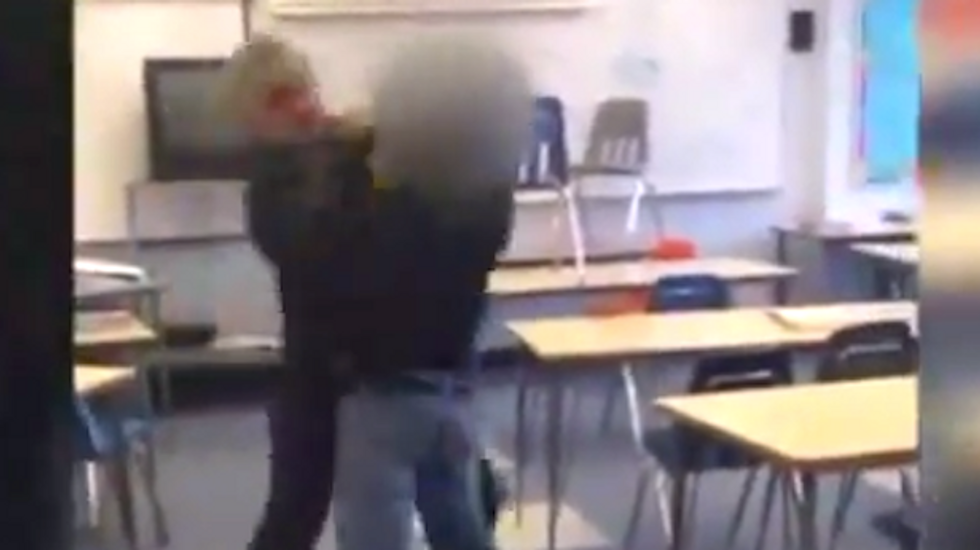 Two teens in California have been arrested in connection with a classroom brawl with a teacher that was videotaped and widely shared online over the weekend.

Mark Black, a popular teacher and wrestling coach at Santa Monica High School, grappled with one student in the video, grabbing the teen by the thigh as he attempted to take him to the ground.

The school superintendent quickly placed Black on leave, calling the teacher’s use of force “alarming” and “unacceptable.”

But parents and students rallied to Black’s defense, accusing Superintendent Sandra Lyon of prejudging the teacher while failing to address the students’ conduct.

Lyon apologized Saturday to the community after an online petition and Facebook page drew thousands of supporters.

Police announced the arrest Monday of an 18-year-old student and a 16-year-old in connection with the incident.

Authorities said the teen had a box cutter with him during the incident.

They will recommend the younger teen be charged with battery against as school official.

The older teen allegedly brought pot with him to class, and a school board member said Black showed restraint by not injuring the teens.

“It’s a huge controversy when teachers put their hands on students,” said school board member Oscar de la Torre. “From me knowing Mr. Black personally -- he was a former teacher of mine -- I know him to be a fair person.”

Watch this video of the fight posted online by WSWorldStarr HipHopSH: