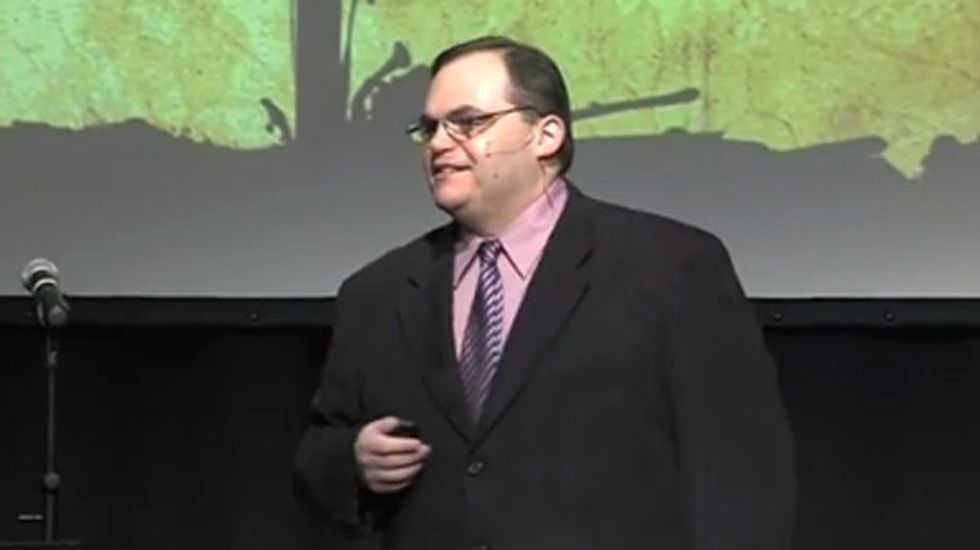 In an audio recording provided by Right Wing Watch, radio host Steve Deace promotes the idea of the "four pillars of the leftist, statist, Marxist movement,” that must be battled as detailed in his electoral strategy book, 'Rules for Patriots.'

"There are four pillars of the leftist, statist, Marxist movement in America: the child-killing industry, the homosexual lobby, government education – that’s sort of their youth ministry, that’s how they get the next generation to indoctrinate them. The homosexual lobby and the abortion industry is where they get their mega, mega hundreds of millions to fund their schemes, " Deace explained. "But the worker bees, the grassroots, the mobocracy, the ‘Hail Satan’ chanters down in Texas last year, that’s the government-sector employee unions. And if you cut them off, that’s like cutting off the recruiting ability of a college football team. That’s the lifeblood of their program is those government-sector employee unions."

The 'Hail Satan' chanters Deace refers to were a group of pro-choice activists who briefly mocked an anti-choice group singing 'Amazing Grace' during the abortion debate in Texas last July.

Deace continued on, advising conservatives to stay away from any Republican who "aids and abets or collaborates with one of those four pillars."

"If you’re supporting a Republican who aids and abets or collaborates with one of those four pillars, I don’t care how good he is on every other issue, he’s actually working for your opponent. Because that’s the infrastructure of the American left, those four facets," he said.

Getting back to the protests against Scott Walker's anti-union policies in 2011, host Pratt called the protestors "dirty, ugly people."

"When Scott Walker had those union thugs lying all over the lobby of the capitol dome, the capitol building itself, they were such ugly, dirty people. ‘Those were teaching my kids?,’ I think people might have been thinking. They lost so much stature, it was just amazing what was happening."

Listen to the audio below from Right Wing Watch

Mary Trump unimpressed by uncle's latest lawsuit against her: 'This is how the Trump family communicates'

Mary Trump reacted to former President Donald Trump's latest lawsuit against her by explaining that lawsuits are "how the Trump family communicates."

Donald Trump filed the lawsuit this week claiming that Mary Trump and The New York Times “engaged in an insidious plot to obtain confidential and highly-sensitive records" about his finances.