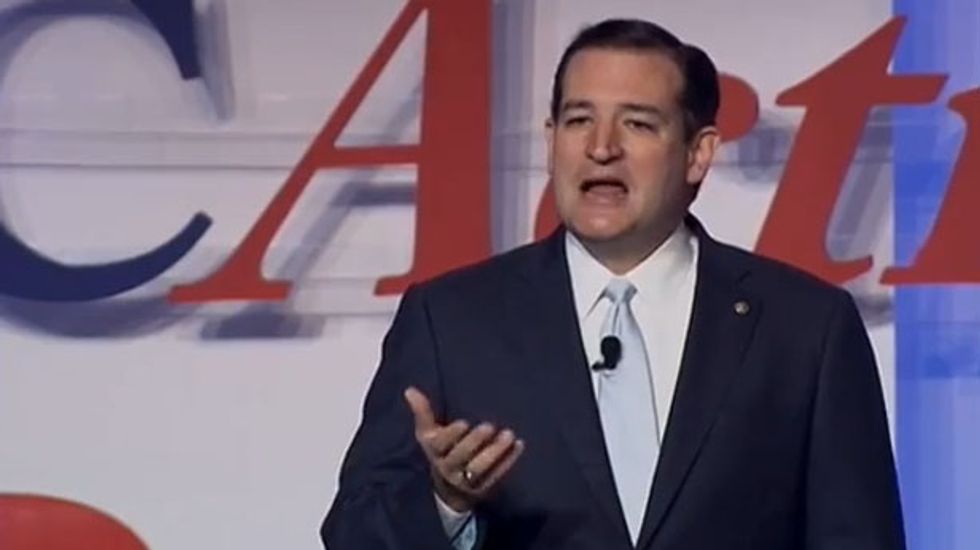 Senator Ted Cruz (R-TX) at hearing on Wednesday said Americans should be free to give unlimited sums of money to politicians such as himself, but campaign experts -- including one from a prominent conservative think tank -- panned his proposal.

The hearing was held by the Senate Committee on Rules and Administration in the wake of the McCutcheon v. Federal Election Commission decision.

In its most recent ruling on campaign finance reform, the Supreme Court struck down the $123,200 aggregate limit that individuals could donate to candidates for federal office, political parties, and political action committee per election cycle. The ruling was only felt by the wealthiest of Americans. Fewer than 700 people would have been affected by the decision in 2012, according to the Washington Post.

Cruz spoke after former Supreme Court Justice John Paul Stevens testified that money should not be considered a form of speech. Stevens warned the senators that unregulated political donations were having a corrupting influence on American democracy.

The Texas Republican sharply disagreed. Cruz argued that limits on campaign contributions were only intended to protect incumbents by making it difficult for their challengers to raise money.

"Every single restriction [on political spending] this body puts in place is designed to do one thing, protect incumbent politicians, and it is powerfully good at that," Cruz remarked. "At the end of the day there are three speakers in a political debate: the politicians, the media, and the citizens. Campaign finance reform is all about silencing number three."

He said Americans should be allowed to give unlimited sums of money to candidates, but that those contributions should be immediately disclosed to the public. The senator described the idea that money wasn't a form of speech as a "canard" and said Congress was violating the Constitution by placing any limits on campaign contributions.

Later in the hearing, after Cruz had left, Chairman Angus King (I-ME) asked Trevor Potter of the Campaign Legal Center to address the Republican's argument.

"That is where we were in the early 70s when there were million dollar contributions to the Nixon reelection campaign," he explained. "The reaction was, something is being sold, or something is being bought for a million dollars. The Supreme Court in Buckley said it is not irrational, it is common sense, that people will believe that huge contributions are intended to buy access, influence, results, and that people who take them are in some way being bought."

"So what about people who don't have a million dollars? They just don't get to buy any access or influence?" he added.

Norman J. Ornstein of the American Enterprise Institute, a conservative think tank, also reacted to Cruz's argument during the hearing. The scholar said he needed to "set the record straight" about the impact of campaign finance reform.

"To me, it is just incontrovertibly clear that for decades after we changed the presidential system so that there were voluntary spending limits, there were public grants, we had a much cleaner and better system. It fell apart because we didn't address those numbers and it became absurd. There wasn't enough money there, and to be frank there wasn't enough public support for public money in the campaigns."

"The sense that the public believes that all of politics, and particularly in Washington, is thoroughly corrupt, that citizens don't have much of a say, that other interests are prevailing, has a corrosive impact on the ability of a democracy to function with legitimacy."