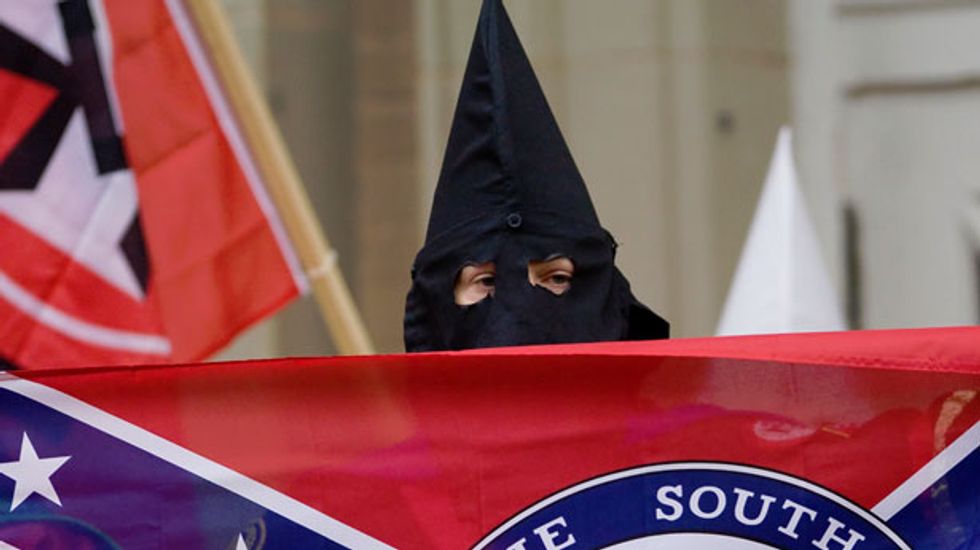 In the wake of last Sunday's shooting in Overland Park, Kansas, when a white supremacist and former Ku Klux Klan member shot and killed three people and shouted "Heil Hitler" after being arrested by police, CNN decided to take a look to see if the KKK could shed it's violent past and rebrand itself.

Last week, Frazier Glenn Miller Jr. shot and killed a teenage boy, his grandfather , and a female teacher at a Jewish Community Center and assisted living facility in Kansas. Following the shooting, it was reported that Miller had a well documented history of violence and racism while serving as  member of several white supremacist groups and paramilitary organizations.

In light of these revelations, CNN's Ashley Fantz, sought out a Ku Klux Klan leader, as well as marketing experts, wondering if the Klan might have an insurmountable problem with their image.

Imperial Wizard Frank Ancona of the Traditionalist American Knights of the Ku Klux Klan spoke with both  USA Today and CNN saying, "What this guy just did set back everything I've been trying to do for years."

Contacted through Twitter, Arcona told CNN: "I believe in racial separation but it doesn't have to be violent. People in the Klan are professional people, business people, working types. We are a legitimate organization."

Ancona who, like Miller, also lives in Missouri, said the new Klan is "about educating people to our ideas and getting people to see our point of view to ... help change things."

Wondering if this was working, Fantz contacted marketinge experts and asked if such a 'rebranding' is possible.

"They stand for hatred; they always have," Atlanta-based brand consultant Laura Ries told CNN. "Maybe they don't believe in shooting up a center for Jewish people, but they still support beliefs that are beyond the scope of understanding for most people and certainly the freedom and equality our country believes in."

Fantz points out that from "a sheer marketing perspective," the KKK has a problem with their lack of a central figurehead.

Ries compares it to the Catholic Church.

"The KKK doesn't have a Pope. Look at what that guy has done. You have to have a leader like that to make people believe a change has happened," she said.

Fantz also interviewed a marketing expert who said that rebranding and advertising will probably always be out of reach for the Klan despite modern tools like Facebook and Twitter.

"Disney is happiness. Nike is you're proud you ran the race. The Ayran Brotherhood -- that's somewhere on the spectrum of rage and outrage," said Dan Hill. "We are talking about an emotion that leads to violence. If you use that rhetoric, you can't say you didn't expect that kind of reaction."

'Tell the truth -- this isn't the only racist': Buffalo councilman calls for honesty about racism in the US

A Monday press conference took place in Buffalo, New York, just days after a mass shooting of a grocery store in a predominantly Black neighborhood. Among the speakers was Bishop Darius Pridgen, the Buffalo Council President, who represents Ellicott District and said that it's time to tell the truth about racism and those who promote it.

It's one thing to attack Matt Gaetz and Elise Stefanik for racism — but Trump is the one who said it out loud: ex-senator

In the wake of the mass shooting targeting a Black community in Buffalo, New York, it was discovered that the shooter had a manifesto filled with hate and racist ideology.

It was reported over the weekend that the so-called "great replacement" or "white replacement" conspiracy theory was something the gunman believed. The false idea holds that Jews are intentionally trying to bring in more immigrants to eliminate white people.