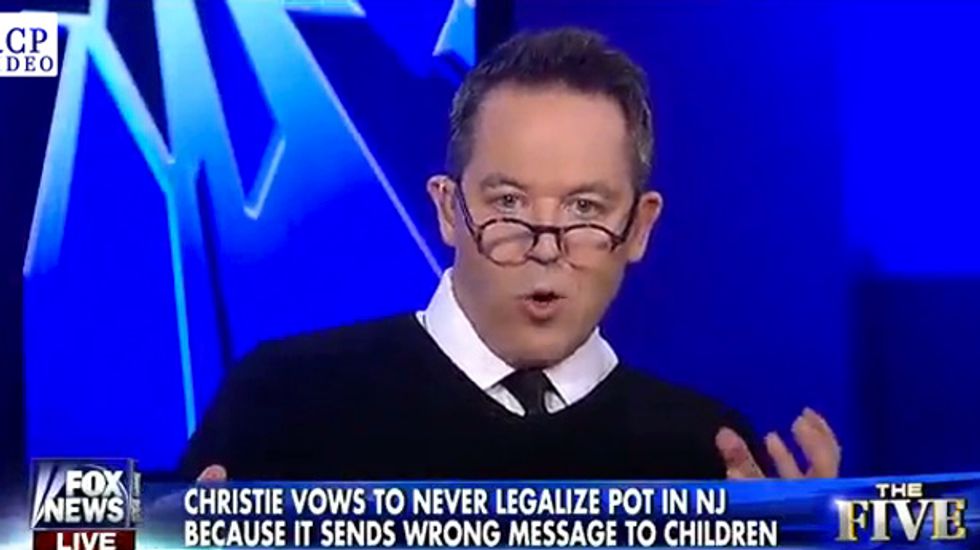 Addressing New Jersey Governor Chris Christie's recent comments explaining that marijuana legalization would not happen on his watch, Fox News host Greg Gutfeld pointed out that the governor should be more concerned with obesity kills that "over 300,000 people per year."

On Monday, Christie appeared on New Jersey 101.5 and explained that, despite the revenue possibilities inherent in a Colorado-like legalization of marijuana, “To me, it’s just not the quality of life we want to have here in the state of New Jersey."

"You know what is deadlier than pot, Governor Christie, what kills 300,000 people every year? Obesity. There are no recorded deaths by overdose of marijuana, you have to smoke like 20,000 joints. Of course people get high and do stupid things, but more people have died from the war on drugs than the drugs themselves," Gutfeld said. "It's insulting to reasonable people to equate legalization with telling children it's okay to do drugs. That's not the point."

"If you're pro-gun, does that mean that you are advocating children shooting themselves? These are inert substances. Drugs do not pop into people's mouths the same way that guns don't shoot without the help of a finger. So this is an inert substance and should be treated like that. We should respect people who want it legalized, and I return to the thing. You should then ban Twinkies and you should ban steaks and you should ban Cool Whip and all the stuff that makes you fat."

Watch the video below via Real Clear Politics