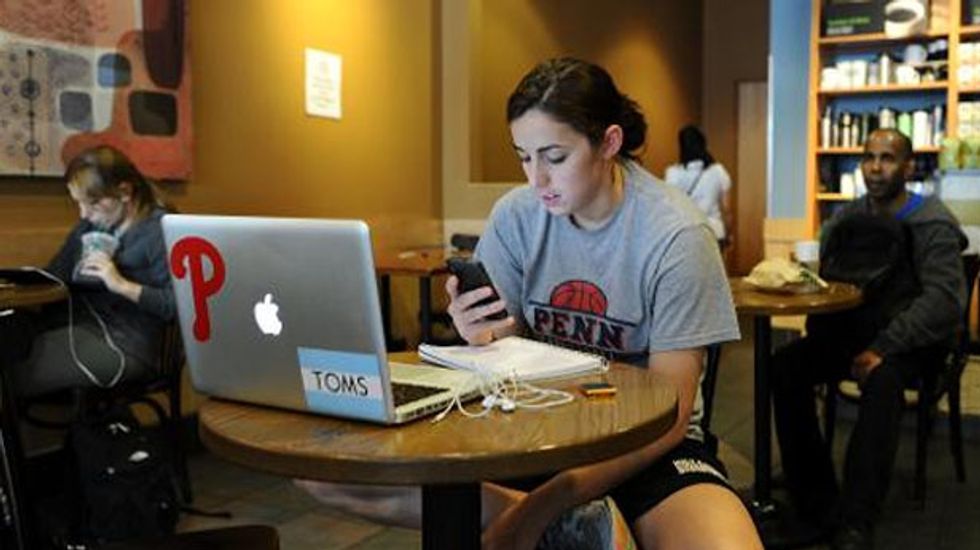 A woman uses her smartphone in a starbucks (AFP)

Internet fast lanes that seemingly run counter to the concept of "net neutrality" would be allowed under rules proposed by US regulators eager to keep broadband service providers from abusing their power.

The Federal Communications Commission (FCC) on Thursday laid out a proposal to make sure Internet service providers don't discriminate when it comes to data coursing through online pipes.

The rules wouldn't prevent Internet service providers (ISPs) from letting technology titans such as Netflix or Google pay for faster data speeds but would require that competing traffic move at "reasonable" speeds.

The "open Internet notice of proposed rule making" sent from FCC chief Tom Wheeler to the full commission was pounced on by critics as a betrayal of the goal of keeping the Internet "neutral" by preventing some online traffic from getting priority over other content.

The post linked to an online petition urging Wheeler to scrap the proposed rules in favor of a non-discrimination stance that involves reclassifying broadband providers as telecommunications services subject to FCC authority.

The FCC was adamant that it remains committed to net neutrality and is trying to create rules that can withstand legal scrutiny.

Two prior attempts, the most recent in 2010, by the FCC to hold broadband service providers to standards were stymied by US District Court decisions that such moves were outside the agency's scope of authority.

Wheeler seized on part of the most recent court decision that suggests the FCC has power to take action if ISPs act in "commercially unreasonable" ways.

The proposed rules "follow the roadmap established by the court as to how to enforce rules of the road that protect an open Internet," Wheeler said in a blog post.

"To be very direct, the proposal would establish that behavior harmful to consumers or competition by limiting the openness of the Internet will not be permitted," the FCC chairman maintained.

The proposal will be considered by the full commission at a meeting in May 15 and, if endorsed, a period for public comment will follow.

Ovum telecom regulation analyst Matthew Howett said that pinning down what the FCC means by "commercially reasonable" will be central to assessing the potential impact of the rules.

“The FCC is having to rethink its approach to net neutrality after a January 2014 court ruling struck down some of the rules which required Internet service providers to offer equal access to their networks," Howett said.

The FCC contends there is a "gap" in oversight of ISPs because the court struck down its efforts to ban blocking or slowing of online data.

Wheeler wants new rules in place by the end of this year.

"What the chairman is doing is moving quickly to re-instate the open Internet goal in a manner that will withstand legal scrutiny," an FCC spokesman said.

"After ten years of trying, the FCC will finally get rules of the road."

The FCC maintained that the proposed rules will bar ISP behaviors "harmful to consumers" and allow it to set high standards for what is "commercially reasonable."

FCC officials speaking on background maintained that enforcing a reasonable standard of broadband performance will allow innovation and competition in online products and services and, by extension, lower prices for consumers.

"The end result is this: no blocking will be the law of the land," the FCC spokesman said.

"This targets conduct that threatens an open Internet."

The FCC planned to look into whether some ISP practices are so unreasonable they can be banned, but said it does not intend a flat rule preventing some traffic to be prioritized.