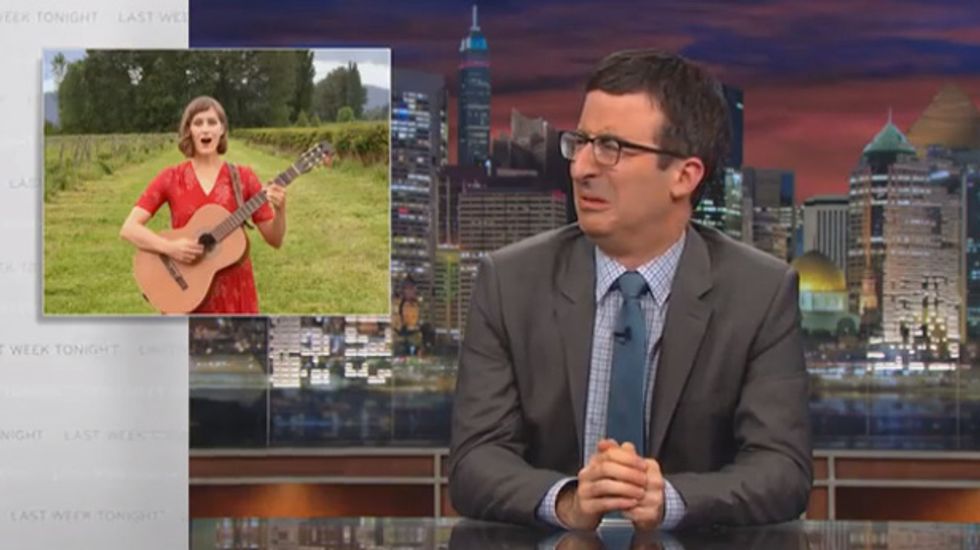 Sunday night, John Oliver mocked the state of Oregon over the failure of its coveroregon.com healthcare website, using pop singer Lisa Loeb to parody one of the state's cutesy advertisements for the program with a backdrop spelling out: 'You f*cking idiots.'

Oliver, on his new HBO show Last Week Tonight, pointed out that Oregon has shut down its balky healthcare exchange website - sending Oregonians to the federal website instead - after spending $248 million on it.

"That has got to be a bitter pill to swallow for the people of Oregon," Oliver said. "Or it would be if they could get the pill, which they can't, because their shitty website is broken."

Oliver pointed out that $3 million went to producing very-Oregonian commercials - showing a portion of one - before grimacing and saying, “We get it Oregon, you people live in a cartoon. Your mountains are breathtaking, your coffee is fair trade, and everywhere you go you hear the sound of f*cking ukuleles.”

With the help of Loeb, Oliver created a parody sing-along commercial to convey to the people of Oregon how costly the failed website program was.

Sample lyrics: 'You stupid Oregon idiots, you human Pinterest boards. Your passion for cuteness might kill your whole state. So long, Oregon.'