Jon Stewart calls 'bullsh*t' on court's election rulings: 'Justice is blind, but only in one eye' 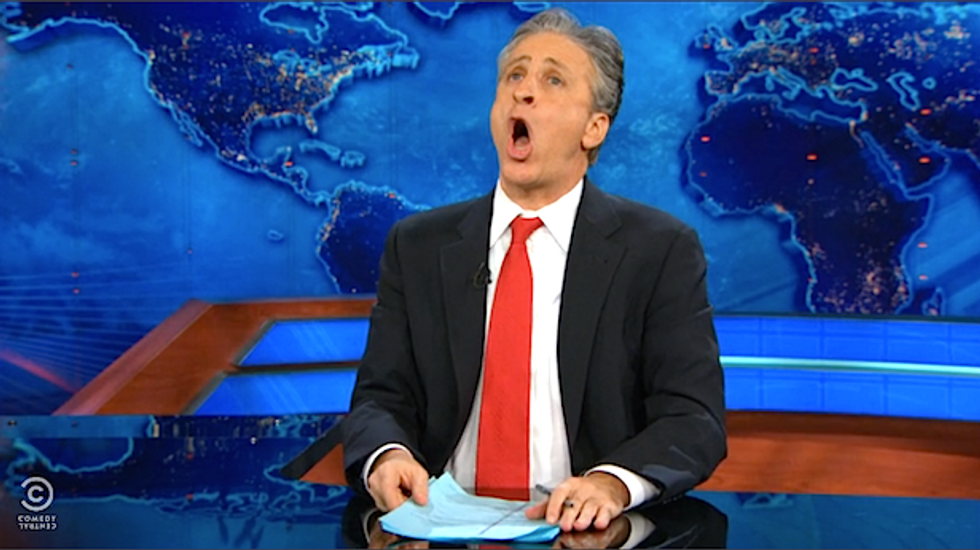 He opened Thursday night’s “Daily Show” with an analysis of the U.S. Supreme Court’s recent ruling in McCutcheon v. Federal Elections Commission, which struck down limits on donor contributions to all candidates while leaving intact limits on donations to individual candidates.

Stewart noted that donors could write hundreds of checks for $5,200, the limit for individual candidates.

“Yep, lots and lots of $5,200 checks, the last great hope of preserving our democracy from the corrupting influence of money is carpal tunnel syndrome,” he said.

That would work out to roughly $3.5 million in contributions, which Justice Antonin Scalia said is not “a heck of a lot of money.”

“His argument seems to be, ‘OK, sure, $3.5 million sounds like a donor is making it rain until you compare that to the monsoon season of money that we unleashed in our previous Citizens United decision, allowing corporations and unions to donate to Super PACs,’” Steward said. “I believe the figure there was, the limit was, whatever the f*ck they want.”

He criticized justices for taking such a narrow, literal, and cartoonish view of the corrupting influence of money.

“According to this Supreme Court, the only kind of corruption that matters is the narrowest possible, Thomas Nast-like, monocled, top-hatted man hands a bag of money labeled ‘money for bribe’ to a literal fat cat while the American public stands behind them wearing a barrel, known as quid pro quo corruption,” Stewart said.

“When the media refers to Sheldon Adelson as a superdonor, they’re not talking sperm -- I hope,” Stewart said.

While there, New Jersey Gov. Chris Christie apologized to the 80-year-old billionaire for referring to the West Bank as “occupied territories.”

“Still don’t think money has a general corrupting influence on politics?” Stewart asked. “Because I can tell you this: My family is full of 80-year-old Jews who would very much like to tell politicians what words they can and cannot use to describe Israel, but as of this taping no presidential hopefuls have flown to their house to solicit that opinion.”

He played a video clip of Senate Minority Leader Mitch McConnell saying that the ruling would “expand the playing field” and allow more Americans to participate in the political process.

“Bullsh*t,” Stewart said. “How the f*ck does this decision enable more citizens to contribute?”

According to an Associated Press report, only 646 donors bumped up against the now-defunct legal maximum contribution limit in 2012.

“McCutcheon doesn’t get more people involved,” Stewart said. “It lets those 646 individuals get themselves more involved.”

He contrasted the court’s loosening of campaign contributions with their tightening of voter ID laws and striking down portions of the Voting Rights Act.

“Justice is blind, but only in one eye,” Stewart said.