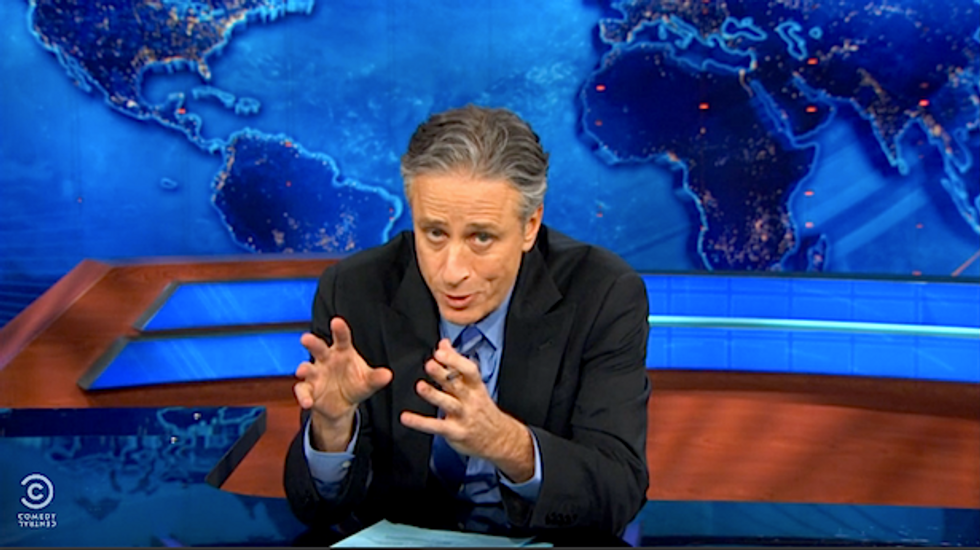 General Motors issued a recall of more than 1.3 million vehicles this week as its new CEO, Mary Barra, testified before Congress about an ignition switch problem that caused cars to suddenly turn off, disabling the engine, power steering and brakes, seat belts, and airbags.

“For no reason, your car may transform into an uncontrollable, 2,500-pound, power-dead, metallic blue cannonball, satellite radio optional,” Stewart said.

He said they must have just learned of the problem and immediately announced the recall, but a news clip showed that GM first noticed the problem in 2001 and issued a 2005 report that found the fix would take too long and cost too much to undertake.

“They studied the problem for four years, did an internal cost-benefit analysis using your standard analytic algorithm barometric ratio equations, and came up with, ‘F*ck it,’” Stewart said. “Costs too much.”

Congress found the cost to replace the faulty ignition switch, which is blamed for at least 13 deaths and 32 crashes, would have been 57 cents per vehicle.

“For God’s sakes, even if you’re strapped for cash, GM, you could have found at least that much in the seats of the cars you’re fixing,” Stewart said. “The thing could have paid for itself.”

GM instead sent out service bulletins to dealerships warning drivers not to use heavy key chains.

“Why fix a problem you created when you could just ask your surviving customers to get rid of all their other keys?” Stewart said.

He suggested that GM attempted to obscure the problem, which it had covered up for more than a decade, by hiring the first female CEO of an American auto manufacturer, who told Congress she first learned of the issue two weeks after her hiring.

“Holy sh*t!” Stewart said. “They hired her and then told her during orientation.”

Barra promised lawmakers that GM would shoulder its responsibilities and had hired an attorney who specializes in negotiating settlements, although she said the automaker was still trying to decide how it should proceed with the cases.

“Why would GM have the ability to in any way wait and see how they feel about settling these cases with these clearly wronged families?” Stewart said. “How are they not automatically liable for damages?”

As it turns out, GM is not liable for claims from accidents that happened before July 2009, when the automaker emerged from federal bankruptcy protection.

“Once again, we learn that, not only are corporations people, they’ve got some sort of weird mutant power that allows them to dodge the consequences of their actions,” Stewart said. “Because GM declared bankruptcy, they are no longer legally liable for human deaths that they caused through their admitted negligence. I cannot wait for a non-corporate person to try that sh*t.”