Jon Stewart mocks childish fantasies of 'Noah' critics: Happily ever after? 'Everybody drowns!' 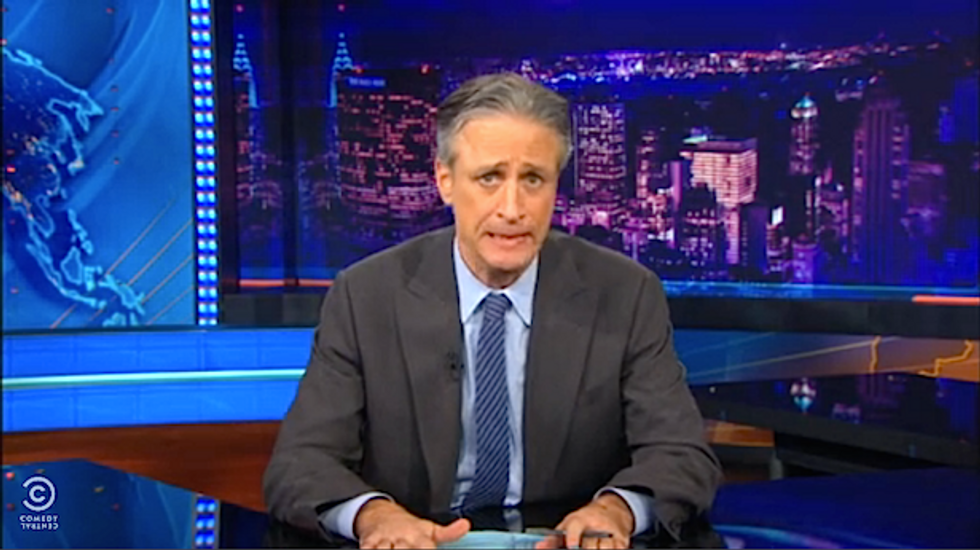 Jon Stewart teased conservatives upset over the film adaptation of Noah, one of the Bible’s most famous stories.

“Have you heard the good news? This week’s top action heroes at the box office are not only Captain America, but also Captain Sumeria,” Stewart said on Tuesday night’s “Daily Show.”

He showed clips of Fox News pundits and other conservatives first complaining that there wasn’t enough Bible-based entertainment, and then complaining that “Noah” – which has earned nearly $200 million in two weeks – was terrible.

“I did not see that coming,” Stewart said.

Conservative critics say the Darren Aronofsky film took too many liberties with the biblical tale, and one Fox News guest complained the movie “is not a documentary.”

“So you’re telling me that a man who lives to 950 and loads two of every animal onto a 300-cubit-long boat – and by the way, a cubit is from (elbow to fingertips) – 300 of these bad boys, yeah, that’s really going to keep the lions away from the delicious zebras,” Stewart said. “Listen, you’re telling me that film won’t qualify to submit in the documentary category? That’s outrageous.”

He said critics who complained the movie did not refer once to God apparently had not have seen it.

“That is weird, because if there’s no God in the movie, who’s telling him to build the boat, to go all ‘Waterworld’/’We Bought A Zoo’ on everyone? His dog?” he said.

“Creator? That could mean anything,” Stewart said. “And while the Bible doesn’t ever use the word, ‘God,’ because it’s not in English – my guess is, we’re not really up for that discussion – but the question is, is ‘Creator’ enough? I mean, ‘Creator’ could be Xenu, could be Tyler, The Creator, could be Master Builder.”

“If only someone in the Noah film, maybe someone like Noah’s son, Ham, said something clear and unequivocal like, quote, ‘My father said there can be no king. The Creator is God,’ that would clarify – oh, right. They didn’t see the fucking movie,” he added.

Some early test audiences were turned off by scenes that showed Noah getting drunk and having “some very dark moments,” according to one video clip.

“You can’t slander Noah like that,” Stewart said. “Who do you think you are? Genesis 9:21? (‘And he drank of the wine, and was drunken; and he was uncovered within his tent.’ Why don’t you remember any of this stuff? You did read the same Bible as the rest of us, right?”

He then showed a video clip of former White House spokeswoman Dana Perino talking about a beloved children’s Bible she’d read as a girl with lovely illustrations of the paired-off animals and a rainbow, saying in that version, “everybody lives happily ever after.”

“Everybody? Nobody lives!” Stewart said. “Everybody is one family and two of every animal! Everybody else drowned! Do you know how many koala bears drowned?”