Megaupload's Kim Dotcom launches the Internet Party as he fights extradition to the U.S. 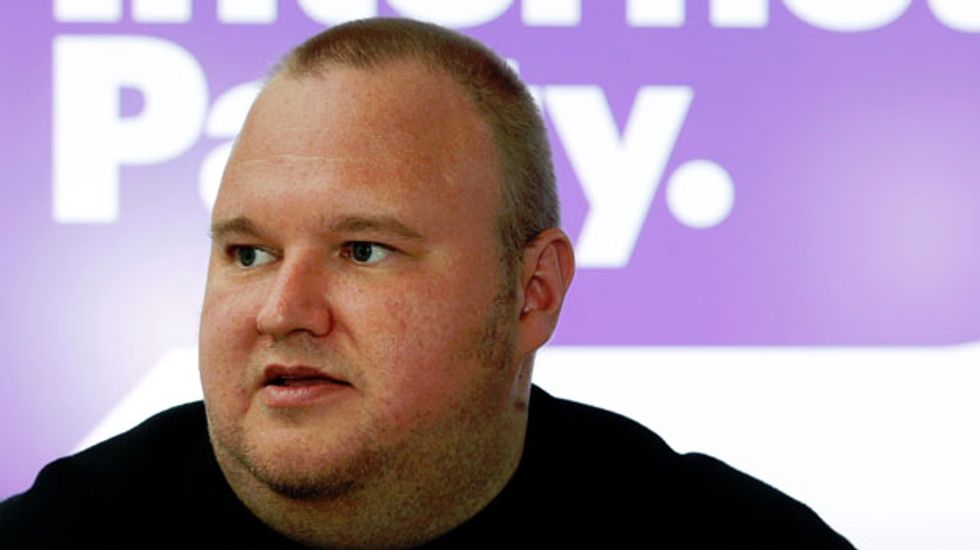 AUCKLAND (Reuters) - Internet tycoon Kim Dotcom holds court while bathing in the pool of a sprawling New Zealand mansion, fist bumping and chatting with some of the 700 guests gathered to celebrate the political party he launched last month to promote Internet freedom.

His latest ultra-encrypted file storage site, Mega, will soon go public after a deal that values it at NZ$210 million ($180 million), and Baboom, an online streaming music service designed to bypass record companies, is nearing its hard launch.

In Dotcom's alternate universe, he is fighting extradition from his adopted country to the United States, where the hulking 40-year-old stands accused of massive copyright infringement related to the Megaupload file sharing site he founded in 2005.

Last week, Hollywood studios filed their own lawsuit against Megaupload and Dotcom, and a few days later four major music labels followed their lead, cranking up pressure on the father-of-five who faces an extradition hearing in July.

The parallel lives of the man born Kim Schmitz in West Germany collided dramatically in January, 2012, when his $20 million rented country estate outside Auckland was raided by dozens of New Zealand police in a dawn swoop carried out at the request of the FBI.

Dotcom was cut out of a safe room in the mansion and locked up, and millions of dollars of assets in property, cash, luxury cars and art were seized. He has been released on bail with access to some funds, while his movements are restricted.

His anger over the injustice he says he faced during and after the dramatic raid, which was swiftly followed by the closure of Megaupload, prompted him to set up a political organization called the Internet Party.

"The raid on my family with two helicopters and 72 cops with machine guns, the illegal spying against my family, the unlawful restraining orders - I felt it was a gross abuse of power," he told Reuters, seated in a living room dotted with stained glass windows inlaid with "M" for Mega.

"When you're in an environment like that ... you feel like you want to do something about this injustice."

The launch of the Internet Party, whose policy platform will be crowd sourced and whose leader will be selected in a process reminiscent of an audition for TV talent show "The X Factor", comes ahead of general elections in September.

Some political commentators have dismissed the party as Dotcom's latest vanity project to goad New Zealand Prime Minister John Key, whom he forced into an apology for illegal surveillance by a government spy agency.

But a proposed tie-up with another fringe party could see it influencing the parliamentary balance of power in New Zealand's German-style proportional voting system.

Dotcom cannot contest a seat, because he is not a New Zealand citizen, and his political career could be cut short if the U.S. Department of Justice succeeds in extraditing him at a July hearing that follows numerous delays.

That would rob New Zealand of one of its most colorful characters.

Evidence of his days as a freewheeling adrenalin junkie hang on the walls of his home, in portraits of Dotcom posing with private jets and yachts, and petting a leopard.

Love him or hate him, people are interested in what he says, at least in New Zealand, where he boasted the most Twitter followers until he was dethroned by pop singer Lorde last year.

"It's not the cult of personality that's important," said Anatoly Kern, an IT worker and Internet Party member attending the party, where guests lounged poolside, wandered through the estate's hedge maze and took "selfies" with a life-size giraffe statue that overlooks the grounds.

"It's his ideas that are important ... The ideas he is driving are much bigger than him. Yes he's a big guy, but the ideas are even bigger."

Not everyone is as sympathetic.

Sunday's pool party ended a week in which Dotcom was slapped with separate civil suits from the U.S. film and music industries, which say Megaupload rewarded users for uploading pirated content and did not do enough to disable access to files containing infringing material.

The Motion Picture Association of America, the film industry lobby group, says it believes copyright infringing activity also occurred on Mega, launched last year, but Dotcom scoffed at the prospect of another lawsuit from the MPAA.

"Let them look at Mega. There's nothing to see (because) it's all encrypted. If they look at Mega, they have to look at Dropbox, Box.net, and every other cloud storage business out there," he said.

"This is a war about a technology and innovations they don't like, and I'm being made an example (of)."

MPAA Senior Executive Vice President and Global General Counsel Steven Fabrizio told Reuters there was an "enormous" difference between file storage services which "might enable some incidental infringement", and Megaupload, which was designed "for the very purposes of facilitating massive copyright infringement".

The U.S. Department of Justice declined to comment on the ongoing case against Dotcom and Megaupload.

Set up in 2005, Megaupload accounted for around 4 percent of total traffic on the Internet in its heyday as users stored and shared files containing everything from wedding videos to Hollywood films.

U.S. prosecutors charge that a significant amount of the site's activity was driven by the latter, releasing evidence in December that movies were downloaded from the site up to 500,000 times over a six-month period.

The FBI alleged Megaupload defrauded copyright holders of $500 million and generated over $175 million in proceeds from subscriptions and advertising - some $42 million for Dotcom personally in 2010 alone.

"THEY WANT TO DESTROY ME"

If Dotcom ends up in the U.S. justice system, he believes he will have an uphill battle to win over the public there.

"The biggest problem I'm going to have in the U.S. is that almost 90 percent of the media is controlled by the same parties that are suing me, that want to destroy me," he said.

"I think they are going to manipulate the media to make sure that I will be portrayed as a villain, and as a criminal."

But he said that search engines and content-sharing sites like Google and YouTube, which could be impacted by the outcome of the case, were likely to support him.

"If I lose, (all file sharing sites) lose, and they all know that," he said.

"In their dream world, once the Department of Justice is done with me, they are going to go after Google, YouTube, Dropbox and all these other sites."

Some Uvalde citizens are not surprised by criticism of the police  — because of the department's history: report

There is outrage and heartache in Uvalde as new reporting shows that lives may have been saved had law enforcement in Texas not waited so long to confront the school shooter.

MSNBC's Jonathan Capehart broke down the latest in the timeline of the shooting.

21 lives lost: Uvalde victims were a cross-section of a small, mostly Latino town in South Texas

One boy brewed his grandparents a pot of coffee every morning. One girl wanted to be a marine biologist. One teacher had been married for 24 years to her high school sweetheart.

As summer vacation approached, their lives were abruptly cut short Tuesday by a gunman at Robb Elementary School in the mostly Latino town of Uvalde.