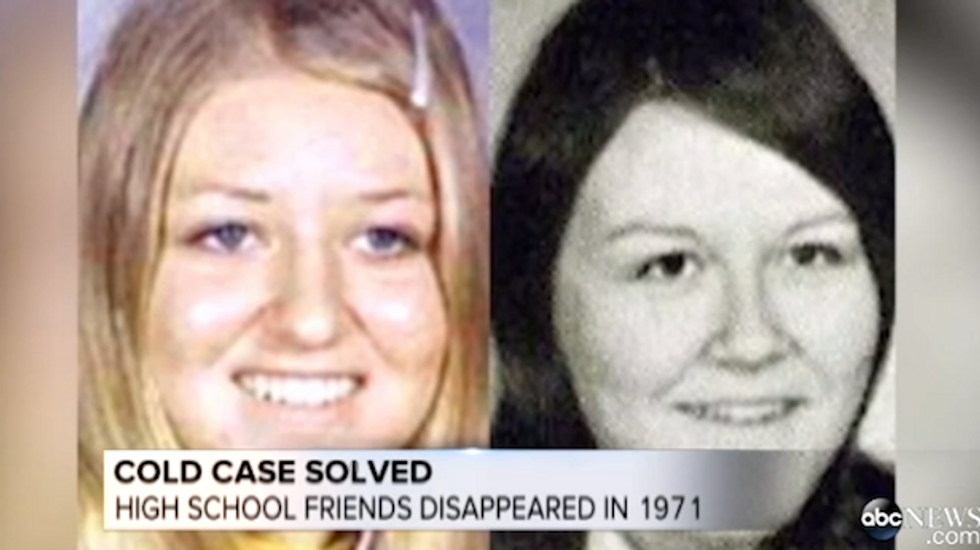 A South Dakota man heartbroken over the 1971 disappearance of his teenage daughter died just five days before a drought revealed her final resting place only miles from their home.

Pamella Jackson and her friend, Cheryl Miller, both 17, were on their way to an end-of-the-school year party in May 1971 when they drove off a country road and into a creek.

The 1960 Studebaker they were driving remained hidden until Sept. 23, reported the Associated Press, when dry weather conditions brought their resting place into view.

Family members, law enforcement, and others had searched the area many times without finding evidence of their location, and Jackson’s father died less than a week before the vehicle was located.

"If you look at that obituary, it indicates one of the saddest parts of Oscar (Jackson)'s life is not knowing about the disappearance of his daughter Pam," said Attorney General Marty Jackley.

Investigators used photographs of well-preserved clothing and other personal items, along with DNA, to identify the girls.

Jackley said all evidence indicated the girls died as a result of an accidental crash, and no evidence of intoxication.

Investigators said classmates who saw the teens before their disappearance said they did not appear to have been drinking, and mechanical tests done on the car and forensic tests performed on the girls’ remains showed no evidence of foul play.

The car was in the highest gear, third, and the headlight switch was in the “on” position.

One of the tires was damaged and the thread was thin, Jackley said, but investigators were unable to tell if a blown tire caused the crash.

Cold case investigators searched a nearby farm in September 2004 and found some apparently unrelated bones, clothing, and other items, but not the car.

The warrant authorizing that search pointed to David Lykken, who lived at the farm in 1971 and was a classmate of the girls, may have been involved in their disappearance.

He was also suspected in the disappearance of three other, unnamed people.

Lykken is serving an unrelated 227-year prison term for rape and kidnapping.

But state prosecutors dropped all six murder charges after determining that a jailhouse informant had apparently lied about Lykken’s supposed confession in the case.

An attorney for Lykken said the state had yet to apologize, but Jackley said two federal courts had upheld the search as properly conducted.

The missing girls’ remains will be returned to family members for burial.