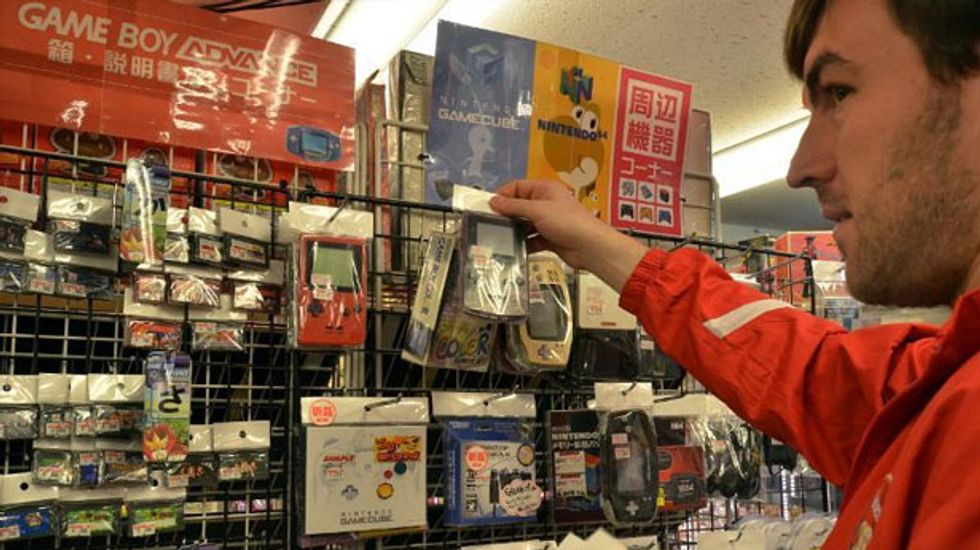 Nintendo's trailblazing Game Boy marks its 25th anniversary on Monday with the portable device's legacy living on in cutting-edge smartphone games and among legions of nostalgic fans.

The Japanese firm released its 8-bit Game Boy on April 21, 1989 -- the same year Soviet troops pulled out of Afghanistan, the Chinese army violently cracked down on protesters in Tiananmen Square and the Berlin Wall fell.

Billed as a "handy game machine", few knew it would turn the console-based industry on its head, starting a revolution that did for portable gaming what Sony's Walkman had done for mobile music.

It also helped turn Super Mario and Donkey Kong into global franchises, allowing users to change their favourite games on the go just by inserting small cartridges into the device.

Kyoto-based Nintendo, which started life as a games card maker that morphed into a global videogame giant, did not invent portable gaming.

But Game Boy's discount price and popular software blew away the competition at the time and pushed mobile gaming into the mainstream.

"At one point, portable gaming was synonymous with the Game Boy," said Serkan Toto, a Tokyo-based games industry consultant

"It laid the foundation for what we call portable gaming today, regardless of whether it is console or smartphone games, because the basic concept is the same... That's the legacy of Game Boy."

Mobility was crucial, remembers one 21-year-old Japanese, if he wanted to escape his parents' wrath.

"With a standing console I needed to play in the living room where my parents were watching television -- they got angry at me for playing it all the time," the man, who did not wish to give his name, told AFP as he browsed inside Super Potato, a Tokyo store dedicated to retro gaming gadgets.

The device also allowed users to connect with another gamer through a link cable, setting off the beginnings of online gaming networks that now number in the millions of users.

"It made gaming portable, but what's great was it was built on the concept of networking, enabling users to connect and battle each other," said Hirokazu Hamamura, managing director at games research firm and magazine publisher Kadokawa Corp. in Tokyo.

A quarter century later, the company's financial fortunes have suffered.

Nintendo has no commemorative events planned for the Game Boy, which ironically foreshadowed the creation of portable smartphone and tablet computer games that have offered up stiff competition to stationary consoles such as Nintendo's Wii, the Sony PlayStation and Microsoft's Xbox.

The Game Boy was discontinued years ago. But in its heyday, Nintendo sold almost 119 million original Game Boy consoles and shifted another 81.5 million units of the next-generation Game Boy Advance series, which was launched in 2001.

The original device's red buttons and cross-shaped directional pads may look clunky these days, but they evoke a sense of nostalgia for many fans, including Spaniard Jesus Mera, who was 12 years old when he began playing with his Game Boy Color.

"It was a revolution -- you could play video games anywhere," said the 26-year-old Madrid native during a visit to Tokyo.

Mera was delighted to spot the same type of Game Boy he used to play for hours on end in the gaming store in Tokyo's bustling Akihabara electronics district.

He acknowledged the small screen and games seem outdated, but "in the past what we had was enough".

"Nowadays we have so many possibilities," Mera said.

That isn't necessarily a good thing for people like 21-year-old student Lin Yuki who sometimes struggles with today's hyper-fast world of 3D offerings where movement is limitless -- and tricky to master.

"Recent games have become so complicated that you can be totally lost on what you're supposed to be doing," he said, admitting he sometimes feels "nostalgic" for simple games with black dots and horizontal scrolls.