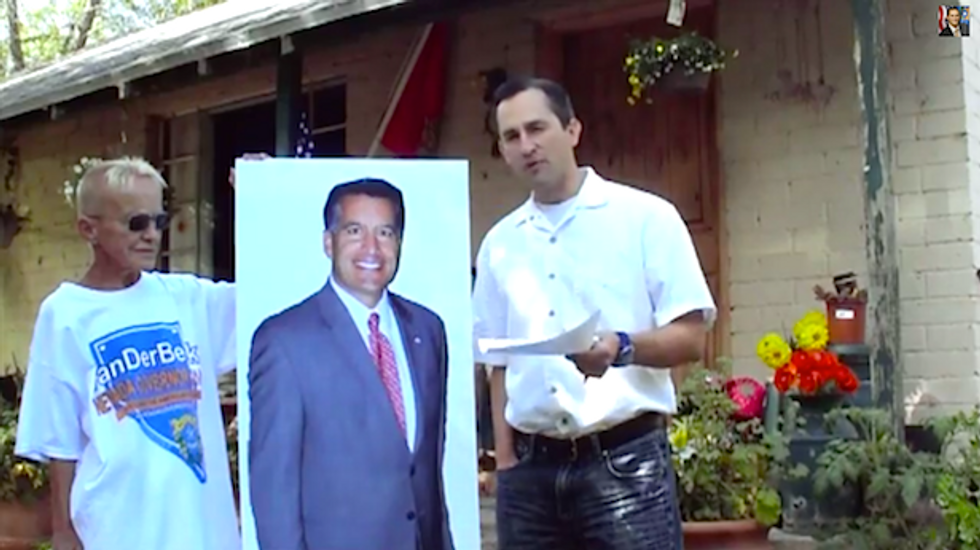 A fringe candidate for Nevada governor debated a cardboard cutout of his incumbent opponent about the Cliven Bundy standoff with federal agents in a video posted online over the weekend.

Crowing roosters repeatedly interrupt the 21-minute “debate” between David Lory VanDerBeek, the Constitution Party candidate for governor, and Republican Gov. Brian Sandoval – identified by the conspiracy theorist as a “Democrat Socialist” – on the federal government’s role in regulating land it owns.

VanDerBeek levies some serious charges against Senate Majority Leader Harry Reid (D-NV), accusing the lawmaker of conspiring to take away land owned by the cattle rancher to give to his own son as part of an agreement with a Chinese energy company.

“Let’s set aside everything,” VanDerBeek says to the cardboard cutout. “Let’s say, for example, Harry Reid isn’t a domestic terrorist and he wasn’t ready to slaughter men, women, and children – even though he was – to take one man’s inheritance to give it to his own family for their inheritance.”

However, the candidate’s claims are based on several false premises.

Bundy and his family do not own the disputed lands, which have belonged to the federal government since before Nevada statehood, and the Chinese firm represented by Reid’s son terminated its agreement last year to buy land about 20 miles from the family’s ranch.

But VanDerBeek pressed on, questioning the literal straw man about constitutional law.

“Let’s set that aside,” VanDerBeek said. “Let’s just take the Constitution. The question is, where in the Constitution does the federal government authorized to regulate the land and natural resources of any given state?”

The federal government has claimed ownership of western lands since before the Constitution was ratified and gave away much of that land to encourage westward expansion.

“So the question is, how can the federal government come in with any agency and say that they have a right to regulate the land and resources. Isn’t that fundamentally a reserved power of the states?” VanDerBeek asked.

The Raw Story asked a similar question last week of a history professor at the University of Nevada-Reno, who said the federal government retained ownership of any land it did not sell or give away, even after statehood.

Congress granted presidential authority in 1891 to mark off western forest reserves, which created the Department of Agriculture’s grazing fee and permit system after the turn of the century that Bundy eventually chafed under nearly 100 later.

“Oftentimes, Mr. Bundy is referred to as a tax dodger in the media, and you’re well aware of that,” VanDerBeek told the cardboard cutout. “People say, ‘Why doesn’t he just pay his taxes?’ and he’s referred to as a freeloader, and that’s the mantra put out over and over by Harry Reid and the ‘lame stream’ media – corporate whore media,” VanDerBeek said.

The candidate says Bundy and his wife told him they had, in fact, paid their taxes, although federal authorities have never claimed otherwise.

“They tried to pay the county, but the county actually sent their taxes back,” VanDerBeek said, apparently conflating tax payments and grazing fees himself.

VanDerBeek points out the Bundys have dozens of grandchildren, but laments that Mexican immigrants are supplementing the low U.S. birth rate but don’t carry with them a “constitutional culture.”

He then praises the “Minutemen” anti-immigration militias as a dog barks angrily off-camera.