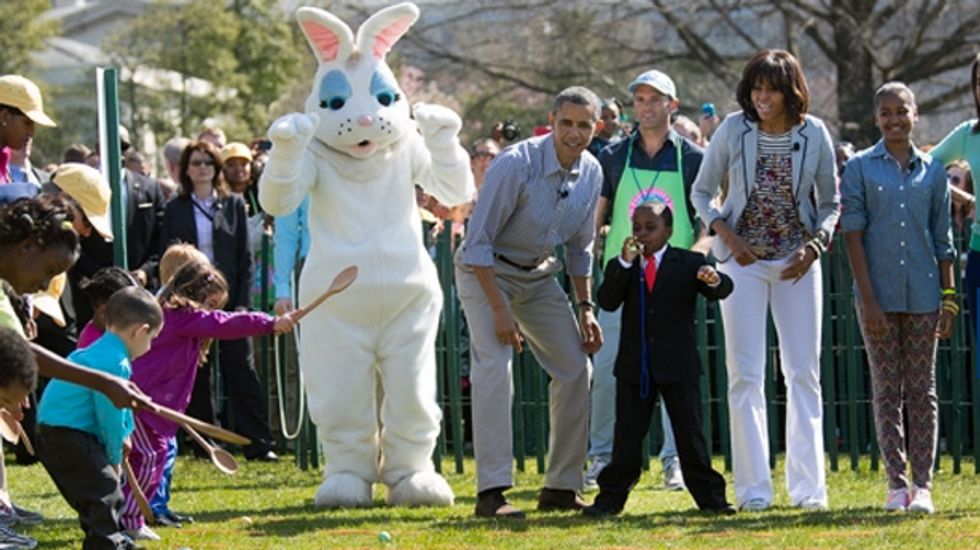 In the video, one of the girls explains that she she is "not mad, just disappointed" in the First Lady for using real eggs. Jump cuts using all three girls, have them accusing Obama of using eggs because other first ladies did, before asking rhetorically: "If all the other first ladies jumped off a bridge, would you?"

Previously PETA has handed out at leaflets in front of the White House calling for the use of plastic eggs instead.

In a letter to Mrs. Obama, PETA President Ingrid E. Newkirk cites the video, writing: “I hope that after hearing their message, you will implement a new, humane tradition at the White House by using synthetic eggs that don’t require any animal to suffer.”

“Cruelly sourced, unhealthy eggs ... are primary contributors to some of our nation’s top killers, including heart disease and strokes.”

PETA spokesperson Lindsay Rajt stated that the organization doesn’t have any direct information on the origin of the White House eggs, but insisted, “The egg industry is inherently cruel and problematic. All animals at the end of the day want to live and the chickens that are used by the egg industry go to slaughter.”

In the video, the girls claim that the White House uses over 7,000 eggs every year” for the roll.

The White House website points out that actual hard-boiled eggs are collected after the event by White House staff members and the Secret Service who distribute them to spectators outside the White House fence.

Visitors to the event are given commemorative wooden eggs provided by the National Parks Foundation.

Over 30,000 people are expected to attend this year's event.