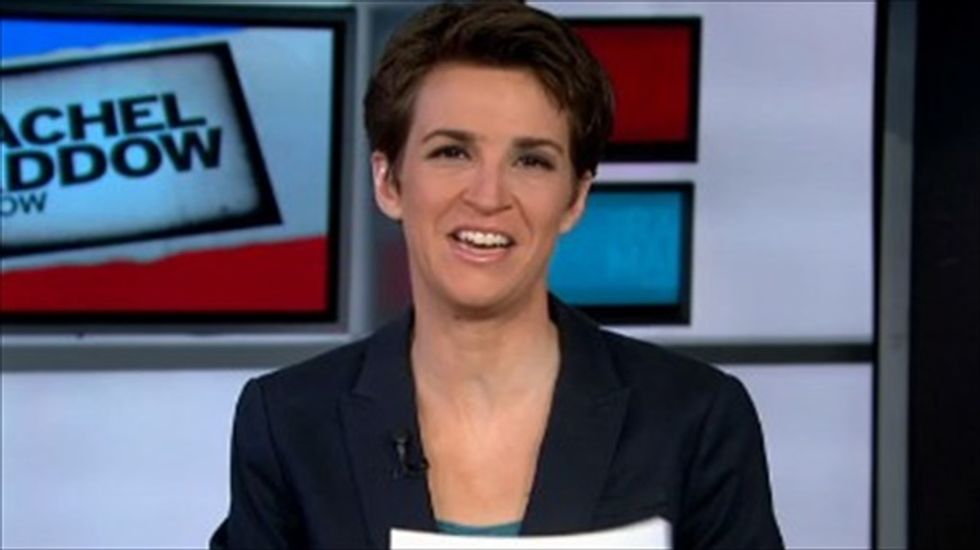 "Maybe this means that alternative energy -- like solar energy -- is now viable enough to be an actual threat to the bottom line of the oil and gas and coal industries. We say it's the four stages, right? First they ignore you, then they laugh at you, then they fight you, then you win. Well, solar has apparently moved on from being ignored or laughed at, and now they're fighting it."

The measure, known as Senate Bill 1456, was passed by the Republican-dominated state House of Representatives last week and was signed into law by Gov. Mary Fallin on Monday. Once implemented, utility companies will be allowed to levy extra charges against homeowners who use solar panels or wind turbines.

According to the Daily Oklahoman, Maddow's theory is not far-fetched: a report published last year by the Edison Electric Institute voiced concern over the prospect of solar or wind power becoming a feasible option for more consumers.

"When customers have the opportunity to reduce their use of a product or find another provider of such service, utility earnings growth is threatened," the report said. "As this threat to growth becomes more evident, investors will become less attracted to investments in the utility sector."

Subsequently, both the Edison Institute and the Koch Brothers-funded activist group Americans for Prosperity (AFP) have run television ad campaigns threatening utilities customers with drastic rate increases. An AFP ad that ran in Kansas also linked renewable energy to opposition to the Affordable Care Act by mentioning that she supported a 2009 law requiring utility companies to get 20 percent of their power from alternative sources.

"Our state directors have been weighing in on energy legislation through office visits in their state houses," AFP told Maddow's show in a statement. "AFP activists are very engaged on energy issues; they’re overwhelmingly opposed to government policies that restrict their access to affordable energy."

While the efforts of groups like AFP and the conservative American Legislative Exchange Council failed in Kansas, however, Maddow wondered if they found an especially-good target market in Oklahoma.

"Did they win for the first time tonight because in Oklahoma because it's Oklahoma?" Maddow asked aloud. "Because Oklahoma is so far off the freaking ideological chart in terms of its state governance that they don't just refuse to raise the minimum wage, they ban raising the minimum wage? Where they see gay people getting married and the reaction is to ban marriage for everyone because the gay people have ruined it? Did warming yourself with the sun instead of coal just become a punishable offense in Oklahoma because it's Oklahoma?"