Rand Paul: Dick Cheney used 9/11 as excuse to invade Iraq for the benefit of Halliburton 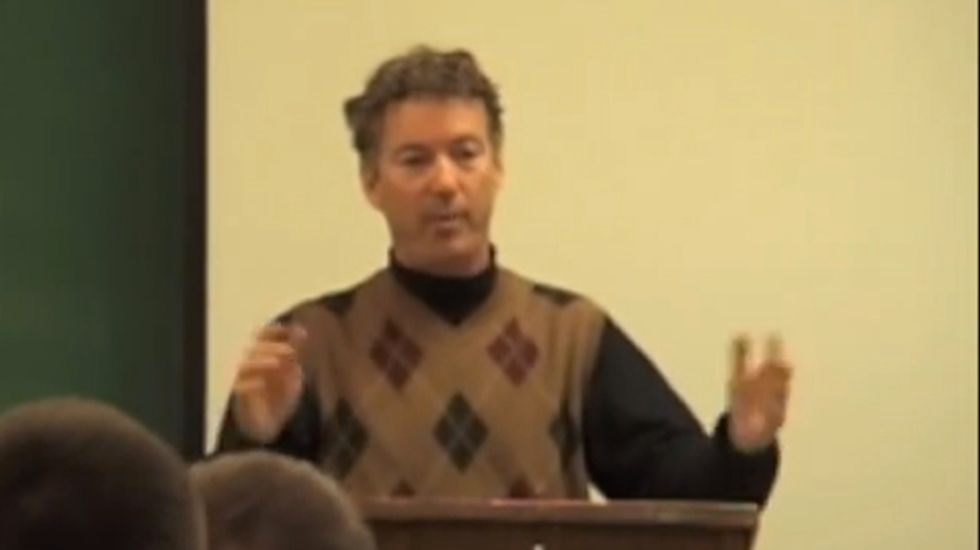 In a videotaped 2009 speech before student Republicans at Western Kentucky University, Rand Paul -- who was just beginning his run for the Senate seat he eventually won -- explained that former Vice President Dick Cheney, who counseled against war in Iraq in 1995, pushed for war following 9/11 to benefit his former employers at military contractor Halliburton.

In the video, discovered by David Corn at Mother Jones, Paul can be seen standing at a lectern describing Cheney's opinion in 1995, when he said that invading Iraq would be, "a disaster, it would be vastly expensive, it'd be civil war, we would have no exit strategy."

There's a great YouTube of Dick Cheney in 1995 defending [President] Bush Number One [and the decision not to invade Baghdad in the first Gulf war], and he goes on for about five minutes. He's being interviewed, I think, by the American Enterprise Institute, and and he says it would be a disaster, it would be vastly expensive, it'd be civil war, we would have no exit strategy. He goes on and on for five minutes. Dick Cheney saying it would be a bad idea. And that's why the first Bush didn’t go into Baghdad. Dick Cheney then goes to work for Halliburton. Makes hundreds of millions of dollars, their CEO. Next thing you know, he's back in government and it's a good idea to go into Iraq.

Paul then goes on to describe events following the 9/11 terrorist attack when, then CIA director, George Tenet is told by George W. Bush adviser Richard Perle that the attack had given them reason to invade Iraq, despite the fact that the intelligence had yet to show a connection:

The day after 9/11, [CIA chief] George Tenet is going in the [White] House and [Pentagon adviser] Richard Perle is coming out of the White House. And George Tenet should know more about intelligence than anybody in the world, and the first thing Richard Perle says to him on the way out is, 'We've got it, now we can go into Iraq.' And George Tenet, who supposedly knows as much intelligence as anybody in the White House says, 'Well, don't we need to know that they have some connection to 9/11?' And, he [Perle] says, 'It doesn’t matter.' It became an excuse. 9/11 became an excuse for a war they already wanted in Iraq.

Corn points out that the speech Paul was giving was not a one time event, describing Cheney's desire for war.

It's Dick Cheney in 1995 being interviewed on why they didn't go into Baghdad the first time under the first [President] George Bush. And his arguments are exactly mirroring my dad's arguments for why we shouldn't have gone in this time. It would be chaos. There'd be a civil war. There'd be no exit strategy. And cost a blue bloody fortune in both lives and treasure. And this is Dick Cheney saying this. But, you know, a couple hundred million dollars later Dick Cheney earns from Halliburton, he comes back into government. Now Halliburton's got a billion-dollar no-bid contract in Iraq. You know, you hate to be so cynical that you think some of these corporations are able to influence policy, but I think sometimes they are. Most of the people on these [congressional] committees have a million dollars in their bank account all from different military industrial contractors. We don't want our defense to be defined by people who make money off of the weapons.

As Corn points out, there have long been suspicions that Dick Cheney used the post-9/11 war on Iraq as a way to thank Halliburton for making him a very wealthy man after stepping down as Secretary of Defense under former President George H.W. Bush.

In 2012, Corn writing for Mother Jones uncovered video of Mitt Romney telling wealthy donors that 47 percent of people would vote for Barack Obama because they were "dependent upon government." The video was widely believed to be damaging to the Romney campaign.

Watch the Western Kentucky video below: