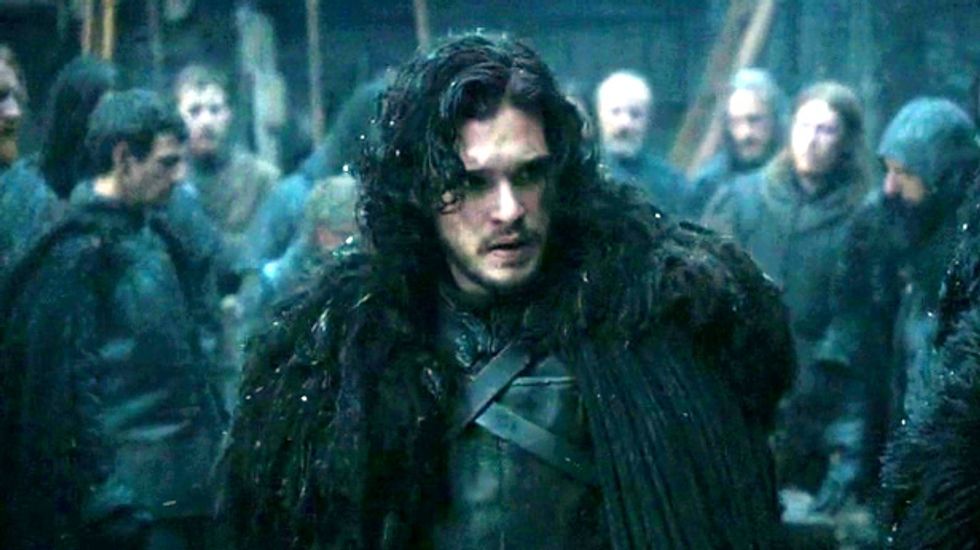 Did anything important happen last week on Game of Thrones?

I couldn't remember, so thankfully, "Breaker of Chains" picks up where "The Lion and the Rose" left off -- with a bereaved Cersei holding a dead Joffrey and screaming for Tyrion's head, convinced that he's responsible for the wee king's death.

The audience learns who's responsible for the king's death -- both immediately, as Ser Dontos is implicated, and more remotely, when Sansa Stark arrives on the boat and Littlefinger makes his first appearance of the season. As the first new scene in this episode, we should be wondering whether the titular "Breaker of [Sansa's] Chains" is Littlefinger. The poor woman has been trapped in King's Landing since before the execution of her father way back in Season One, so even though she's not technically enslaved, Littlefinger is at the very least releasing her from a kind of captivity.

Of course, Littlefinger is also the worst sort of person -- a human-sex-slave-trafficker with no compunction about forcing young boys and girls into lives of perpetual degradation, so Sansa shouldn't feel too comfortable being whisked away by him in the night, as you never know how many others have made decisions similar to hers and lived to regret it.

But, for the moment, Sansa's out of King's Landing!

Director Alex Graves then shifts to Tywin, Cersei, and young Tommen gathered around the king's dead body. It's a touching scene, in which Tywin grieves for his dead grandson by immediately beginning to groom his replacement.

Speaking of still being alive, Jaime Lannister is, and he's a man, and he has needs. In a reversal of the Jaime-is-becoming-a-better-human-being plot, here we have a sex-starved Jaime raping his sister over the body of their dead child -- in other words, we have a return to the incestuous relations that make King's Landing the city we love to hate.

As for whether it's a rape, director Alex Graves told Alan Sepinwall that "it becomes consensual by the end, because anything for them ultimately results in a turn-on, especially a power struggle." Which means, yes, it's rape.

Jaime's not the only one "returning to form," so to speak, as the Continuing Adventures of Arya and Her Hound make clear. They shack up in a house, learn all about the responsibility of hosts to guests -- you know, the very, very important rule that hasn't been operative since Ned had to kill Lady in the second episode of Season One -- but they say little of the responsibility of guests to hosts, so of course the Hound robs his hosts before taking leave of them. His argument -- that robbing them is kinder than what Lannister men will do to them come winter -- is accurate, as we've already learned this season, but somehow not entirely convincing.

From one victim of one war, Graves moves to another victim of another -- Gilly, whose father used the threat of the wildlings to create his own personal, incestuous brothel, and who Sam fears might be taken advantage of by one of his fellow brothers in the Night's Watch. Being a man of the world, in order to protect her, he deposits her in an actual brothel, where surely no drunken men will ever bother her.

We move from one brothel to another, and for the second time in three weeks, Oberyn Martell suffers from a case of lannisterus interruptus. The man can't seem to have any fun in a brothel without a Lannister walking in wanting to have a serious conversation with him. This time, it's Twyin, not Tyrion, and he offers Oberyn a position on the Small Council.

Meanwhile, Tyrion rots in prison, accused of murdering his nephew, and for the second time in two episodes, attempts to save someone he loves by pushing them away. He convinces a heartbroken Pod to testify against him, if it comes to that, in order to save his own life.

As Tormund and his wildlings attack south of the wall, Craster and his non-Gilly wives are attacked north of it. The significance of Jon Snow's lies about the number of men in the Night's Watch becomes apparent -- they're being attacked on all sides, so when Mance Rayder decides to attack, the force that will accompany with crush this paltry murder of crows.

The episode ends with a brilliantly executed rabble-rousing, as Dany arrives at the walls of Meereen and promptly pounds them with barrels full of broken slaver's chains and collars. It's an elegant means both of preserving the show's budget -- which isn't to say there aren't some fantastic shots of Meereen -- and displaying Dany's growth as both a leader and a human being. Instead of a show of force, she elects to demonstrate the effect she can have both on those who choose to fight her and those she chooses to free. 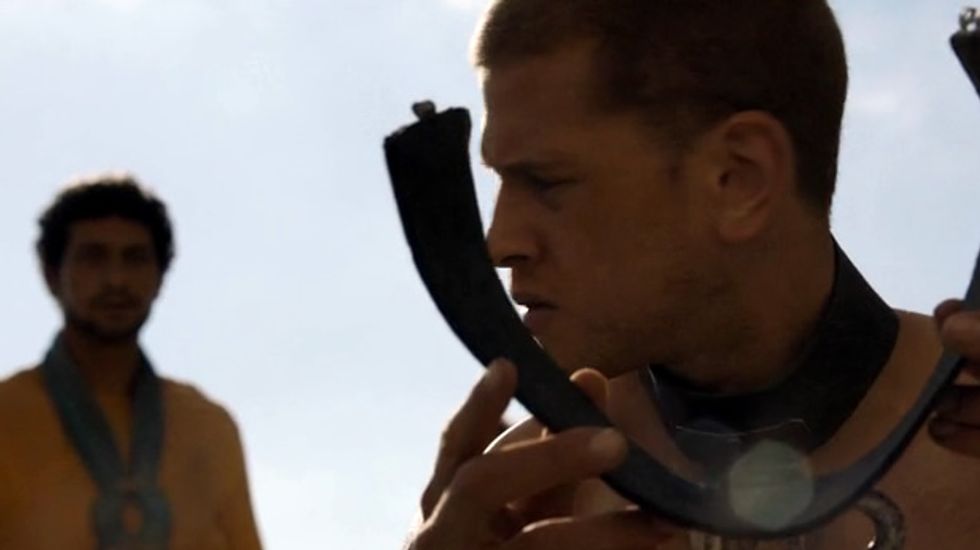 I mean, how comfortable do you think those slave-owners feel behind their high walls now?

Note: If you enjoyed the fine commentary provided in this recap, feel free to check out my Game of Thrones podcast here.