Recap: 'Game of Thrones,' Season Four, Episode Two: 'The Lion and the Rose' 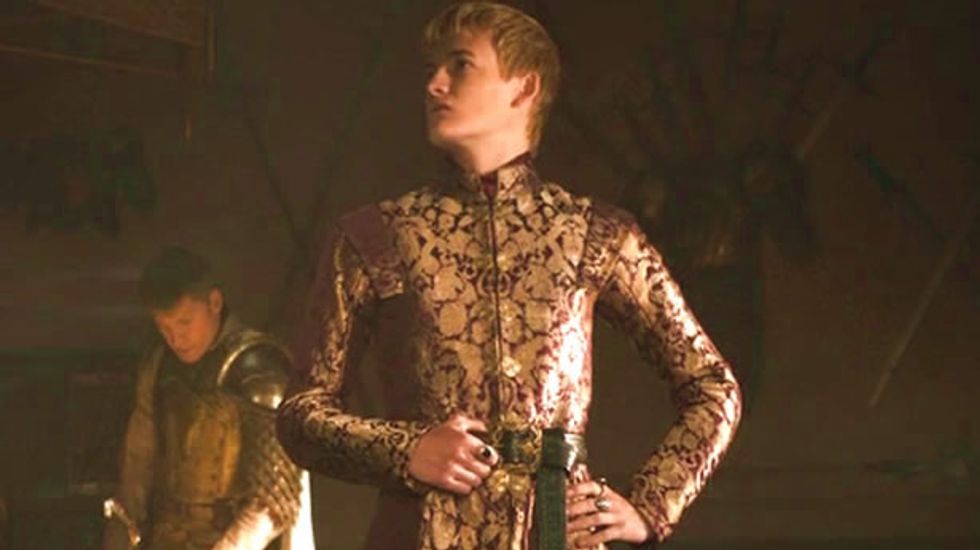 So little of consequence happens on this episode of Game of Thrones that I'm tempted to skip this week's recap. "The Lion and the Rose" is, even more than its predecessor, a "house-keeping" episode, the point of which is to tidy up stray plots in preparation for a significant event in a subsequent episode.

Or at least, that's how it seems for the first fifty or so minutes.

The episode begins with the Bolton bastard, Ramsay Snow, hunting down a servant girl. The point director Alex Graves is trying to hammer home here is that -- in case you forgot -- that the Boltons are vicious and terrible people. Ramsay Snow is hunting this woman for sport, and after wounding her, refuses to kill her because he has "to reward the hounds for all their hard work."

He is, in short, someone who cares more about the well-being of his dogs than the suffering of a human being, and Graves is reminding you that that's what these Boltons are like right from the get-go. Or maybe he's up to something else. If the opening scene in an episode bookends the final -- as I argued last week is almost always the case with Game of Thrones -- then we should expect the episode to end with something analogous to an anonymous pack of wild dogs ripping a young person to shreds at the behest of a sociopath.

But we'll get to that soon enough.

The scene shifts to King's Landing, where Jaime and Tyrion Lannister discuss what it's like to be disabled in the eyes of their father. As I discussed in my Internet Film School column at the AV Club last week, the level of framing of shots in episodes of Game of Thrones is very significant. You can click on that link for a detailed discussion of how that works, but for our purposes, it suffices to say that the height at which the camera's held in this scene is such that Jaime and Tyrion's eyes occupy the same level in the frame: 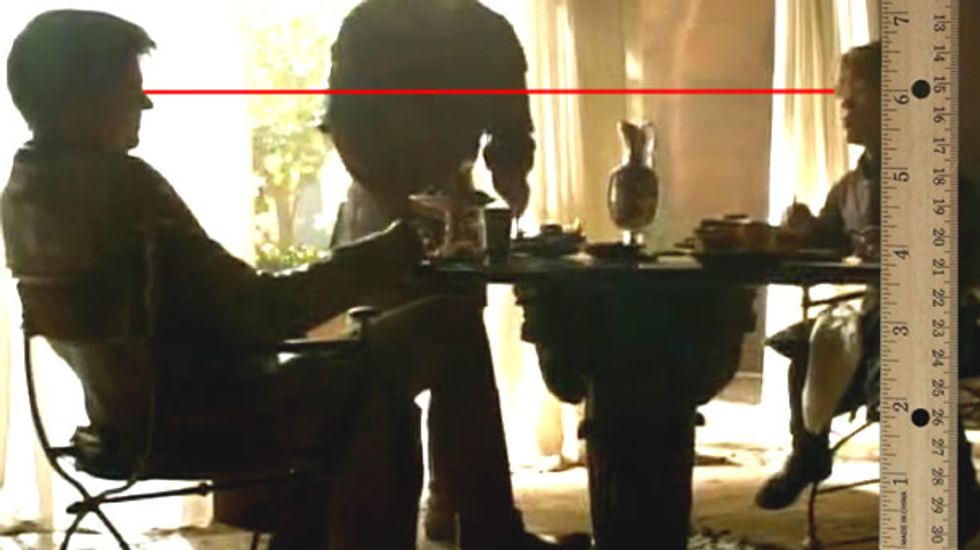 According to my makeshift internet measuring device, their eyes are both exactly 6-inches high as they are having this conversation, meaning that in a conversation about how they are both equal failures in their father's eyes, they're making direct eye contact. Jaime's even slouching his shoulders a little in order to be able to look at Tyrion without also looking down on him. The point being, Graves is clearly orchestrating the scene in order to create the impression of equality between two brothers who, prior to this point, could not have been more unequal in their father's mind.

But this moment of brotherly equality is fleeting, as it's immediately followed by one in which Tyrion's sellsword, Bronn, begins to teach Jaime how to fight with his left hand. Unlike the scene with Tyrion, it's pretty obvious that these two are not, in fact, equals: 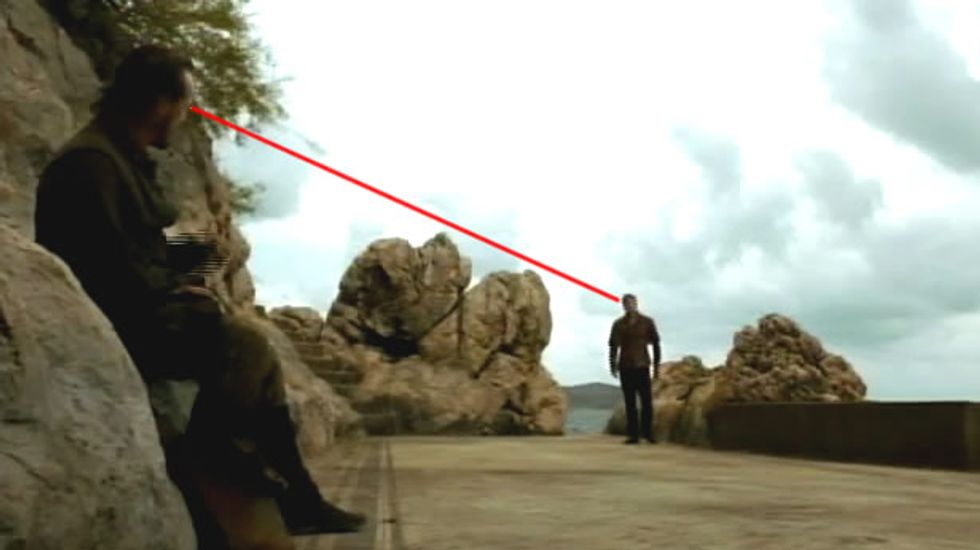 Everything in that shot -- from the look on Bronn's face to his posture to just how tiny Jaime is standing way over there on the other side of that platform -- helps hammer home the same message communicated by the two in conversation: Bronn is now better than Jaime, at least according to the definition of manliness Jaime once judged himself by. In fact, this scene could easily have played out in complete silence without losing any of its impact, so thoroughly is Jaime's abjection displayed.

Things just can't get any worse for Jaime, can they?

After another reminder of the utter awfulness of all things Bolton -- which is actually quite an interesting scene, a full discussion of which can be found in my Game of Thrones podcast, which I co-host with Race for the Iron Throne's Steven Attewell -- the episode returns to King's Landing, where Varys informs Tyrion that his relationship with Shae has been discovered.

A wedding brunch ensues, in which Joffrey is given, then murders a book, and Cersei and her father, Tywin Lannister, plot against the recently discovered Shae. Realizing this, Tyrion attempts to drive away with vinegar what he couldn't tempt away with honey, as he tries to convince Shae that she's in danger and needs to leave by saying horrible things.

Mystical things happen, including people being burned alive and someone named "Bran" -- his name sounds familiar, but I'm not sure I remember who he is -- inhabiting the mind of a dire wolf on the hunt, then learning what it's like to be a tree with deep roots and a longer memory, thereby ruining the ability of Game of Thrones fans to recruit their friends to watch by saying, "It's fantasy, but not, like, magic fantasy."

If I seem to be skipping through important scenes like I have somewhere better to be, it's only because the episode is too -- outside of "Blackwater," the ninth episode of Season Two, the wedding banquet that begins at 30:37 is the longest sustained scene in the show's four season-run.

There is much that can and will be discussed about the so-called "Purple Wedding" -- who poisoned Joffrey, did they use the wine or the pie, were any of those reverse shots to significant players meaningful, or is the scene like a broken, spilled barrel of red herrings? -- but I know what you want to talk about: 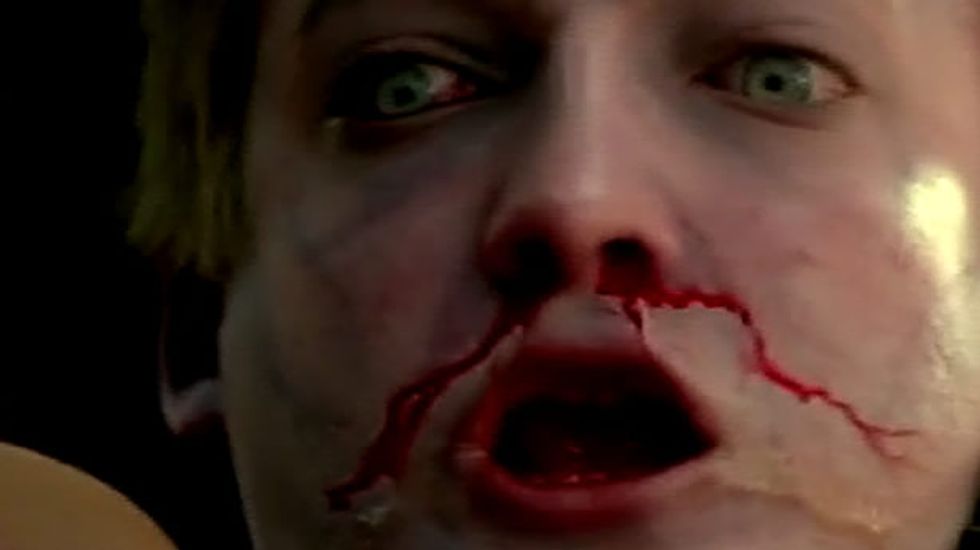 And here's what I have to say to you: you are all terrible people, sitting there on your couch, enjoying the sight of a child dying a painful death. You are, in a real sense, much like the audience in "The Ember Island Players" episode of Avatar: The Last Airbender -- you're sitting there actively rooting for the death of a child. Whether the child deserves to die is another matter, because you want him to.

Put in a modern context, the debate about the audience's reaction to Joffrey's death mirrors those that occur when children are charged as adults -- except in this case, the identity of the judge, the jury, and the executioner is unknown.

And yet you cheer, good little liberals that you are.

The question you need to ask yourself is not whether you believe Joffrey is old enough to understand what he's done, or whether he's an unrepentant and irredeemable sociopath who deserves to die -- it's whether you believe an 18-year-old deserves the death penalty for crimes he committed as a minor.

I'm writing this before the episode airs, but I wager that the response of most viewers to his death involved joyous, prolonged shouting. But before you enjoy yourself too much, remember that the worst thing about Joffrey may have been that he turned you into someone who cheered while a child died.