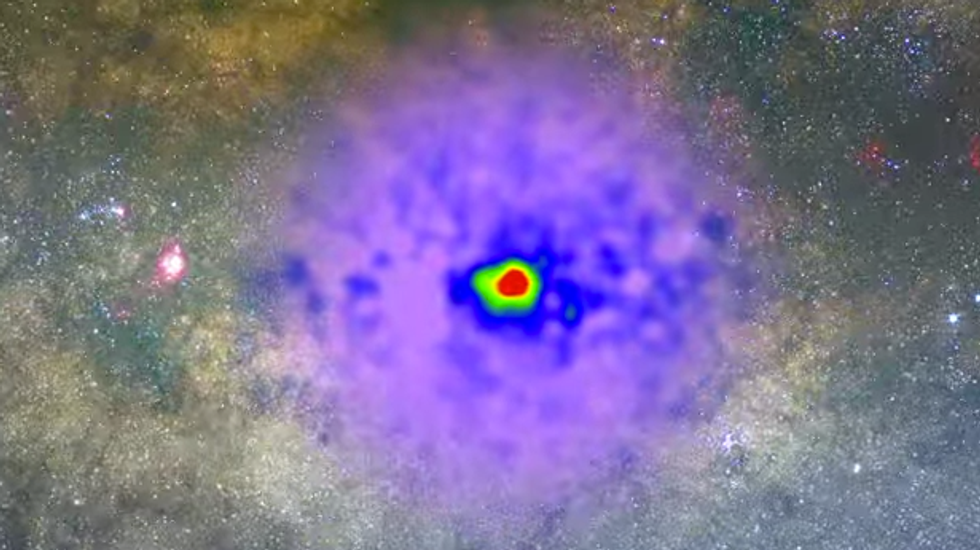 Scientists created what they say is the first image of dark matter by removing all explainable galactic phenomena from a photo recorded by a NASA telescope.

The mysterious material makes up about 27 percent of the universe, but researchers understand more about what it’s not than what it actually is.

A team from Harvard, the University of Chicago and the Massachusetts Institute of Technology studying gamma rays captured by the U.S. space agency’s Fermi telescope picked up a signal that couldn’t be explained by other alternatives.

So the researchers cleared away all the other gamma rays in the publicly available image, pixel by pixel, until they were left with an image they believe could be the elusive material.

“Our case is very much a process-of-elimination argument. We made a list, scratched off things that didn't work, and ended up with dark matter,” said researcher Douglas Finkbeiner, of Harvard.

The signal is the most compelling ever found for dark matter particles, said another researcher.

“At this point, there are no known or proposed astrophysical mechanisms or sources that can account for this emission,” said Dan Hooper, of the Fermi National Laboratory. “That doesn't rule out things that no one's thought of yet, but we've tried pretty hard to think of something without success.”

One theory suggests dark matter is made up of Weakly Interacting Massive Particles – or WIMPs – that either destroy one another on contact or produce a new particle that quickly decays.

Either event produces gamma rays, which can also originate from interactions between binary systems, isolated pulsars, and supernova remnants.

“This is a very exciting signal, and while the case is not yet closed, in the future we might well look back and say this was where we saw dark matter annihilation for the first time,” said Tracy Slatyer, of MIT.