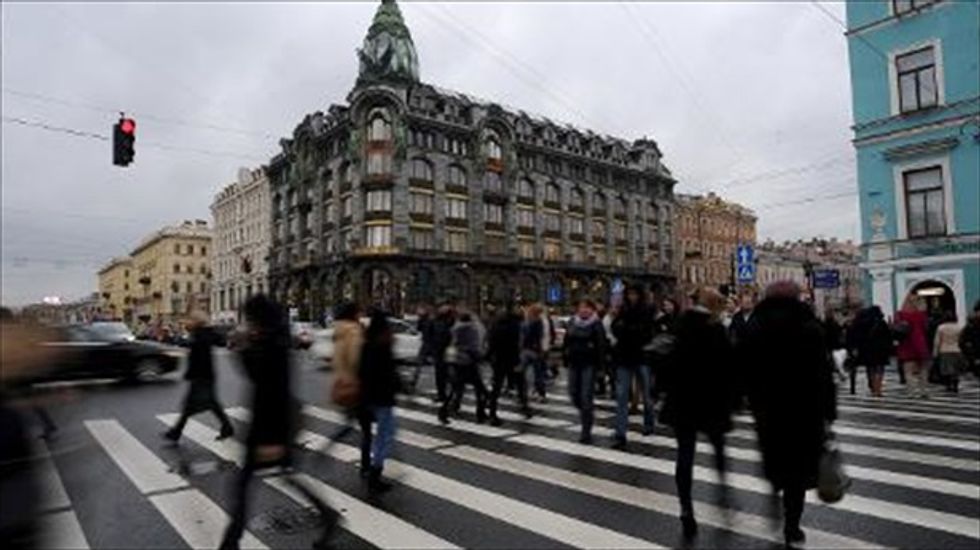 A picture taken in Russia's second city of St. Petersburg on Nov. 1, 2013, shows a building where the social network VKontakte (In Touch) rents an office space [AFP]

The founder of Russia's top social network VKontakte, Pavel Durov, on Wednesday said he has resigned as chief executive in a bitter conflict with a major shareholder, a dramatic announcement some initially saw as an April Fool's joke.

True to his mysterious persona, Durov left followers guessing by resigning on April 1 and signing off with a quote from the cult "Hitchhikers Guide to the Galaxy" science fiction series: "So Long and Thanks for All the Fish."

A link Lobushkin posted on Twitter to what he said was the official press statement turned out to a link to a video of Rick Astley singing his 1980s pop classic "Never gonna give you up".

The two main shareholders in VKontakte however then confirmed that Durov's departure was no joke and he had already written a resignation statement.

With over 100 million users concentrated in the ex-Soviet Union, VKontakte (In Touch) is Russia's most popular social network, far outstripping Facebook to which it is often compared.

Himself often compared to Facebook's founder Mark Zuckerberg, Durov is seen as a the poster boy for a new kind of youthful Internet entrepreneur taking Russia in new directions as Internet use surges even under the tightly-controlled rule of President Vladimir Putin.

In a posting on his personal VKontakte page, Durov had said he was leaving as a result of the changes in the company's shareholder structure in 2013 which saw the United Capital Partners (UCP) investment fund take a 48 percent stake in the company.

"The freedom of action of the chief executive in managing the company has considerably decreased. It has been harder and harder to remain with those principles on which our social network is based," he said.

He said he would remain involved in the life of VKontakte according to his rights as founder but added he was "not interested in formal posts under the new conditions."

Durov has fallen out with United Capital Partners over his independent development of a hugely successful messaging service Telegram which the shareholders believe should have been developed as part of VKontakte.

Durov had already sold his 12 percent stake in the firm in January and many analysts had expected that the 29-year-old's exit from the company he founded after leaving university in 2006 was only a matter of time.

His stake was bought by the Mail.ru group part-controlled by Russia's richest man Alisher Usmanov, with whom Durov is believed to be on friendly terms. Mail.ru now holds almost 52 percent in VKontakte.

Usmanov's holding firm USM Advisors "confirms that Pavel Durov announced his departure from the position of CEO," a spokeswoman said, confirming that his announcement is "not a joke".

A source close to VKontakte told the Vedomosti daily that Durov had signed his resignation already several days ago. Meanwhile a spokeswoman for UCP told the paper that shareholders would discuss the appointment of a new executive this week.

"The main thing is that the new chief executive is motivated by the growth of the business and its shareholder value," said UCP spokeswoman Nafisa Nasyrova.

UCP's frustrations over Durov's development of Telegram grew after after Facebook struck a colossal deal to buy mobile messaging service WhatsApp for more than $19 billion in cash and stock, showing the huge potential value of such services.

"Our arguments over Telegram are not going to disappear just because Durov has stopped being chief executive," said Nasyrova.

Giving almost no media interviews and rarely appearing in public, Durov cultivated an almost mystical image, but has fiercely resisted moves by the Russian security services to gain access to its data.

He made a public job offer to wanted US intelligence leaker Edward Snowden after he took asylum in Russia. In one bizarre incident, he showered banknotes onto stunned passers-by from VKontakte's headquarters on Nevsky Prospekt in the centre of Saint Peterburg.