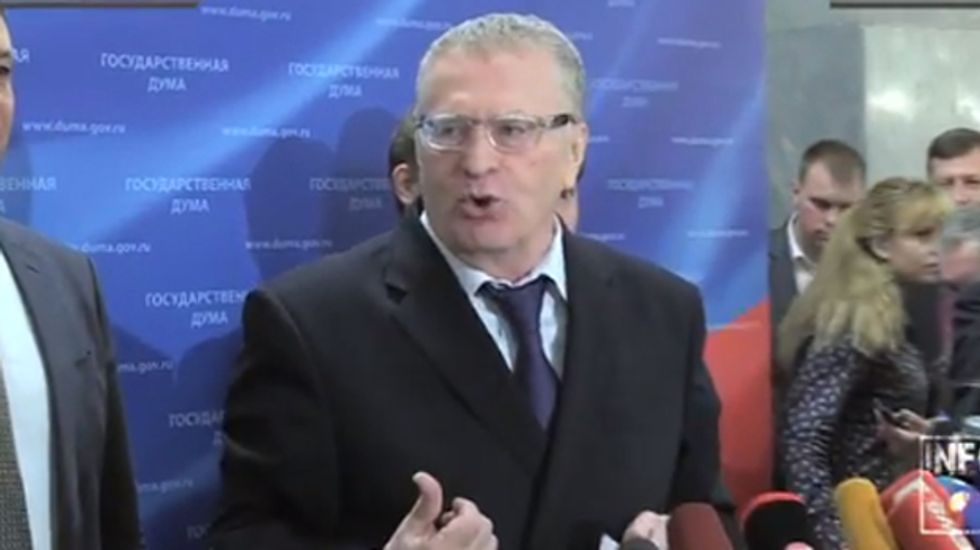 A far-right Russian politician is facing legal problems after ordering two of his aides to 'violently rape' a pregnant Rossiya Segodnya journalist in front of other reporters at a press conference.

Vladimir Zhironovsky, of the pro-Kremlin Liberal Democratic Party,  launched into an animated tirade against Rossiya Segodnya journalist Stella Dubovitskaya, - who is six months pregnant - after she asked him an innocuous questions about  possible sanctions against the pro-Western government  of Ukraine, according to the Daily Mail.

Responding to her question, Zhironovsky grabbed two of his male aides, telling them, "When I say, you run to her and violently rape her" before shoving them in her direction and shouting: "Go and kiss her. Grab her."

Male and female journalists in attendance were shocked at the outburst with one male journalist asking, "She is pregnant, why are you attacking her?"

Yulia Chuchalova of news agency Interfax  spoke up in defense of Dubovitskaya, telling the politician,  "This is derogatory, humiliating - what are you doing here?"

Zhirinovsky shouted back,  "What are you doing intervening here, you lesbian? Get out of here."

"There are pregnant women at the Maidan [Independence Square in Kiev, scene of the Ukrainian Revolution] and here as well, druggies and what have you, " he continued. "We need healthy people. Pregnant women should not show up at work. Sit at home and look after your child, got that?"

Zhirinovsky ended his tirade with "Get out of here, you damned lesbians."

Dubovitskaya, along with several other female journalists, left before the press conference ended. She was taken to  a nearby hospital and treated for shock.

Her employer - news agency Rossiya Segodnya - indicated that they would be suing Zhirinovsky over the attack.

"Due to the disgusting incident in the state duma, after which our correspondent was hospitalized because of Vladimir Zhirinovsky's discourtesy, we have decided to use all legal options to punish Mr Zhirinovsky as severely as possible under the law, including by suing him," Rossiya Segodnya general director Margareta Simonyan said in a statement.

Members of the Russian Parliament condemned Zhirinovsky's tirade with  Oleg Nilov calling for "silence and some calm as the best medicine for rabies."

MP Boris Reznik described the incident as "intolerable" accusing Zhirinovsky of being "drunk on his own impunity" and "a disgrace to the Russian parliament."

The Russian parliament's ethics commission is reported to be looking into the incident.

See untranslated video from Inform 24 below:

Think about people you know, and how you could tell they were around even if you couldn't see them: their voice, perhaps, or even a favored deodorant.

For bottlenose dolphins, it's the taste of urine and signature whistles that allow them to recognize their friends at a distance, according to a study published Wednesday in Science Advances.